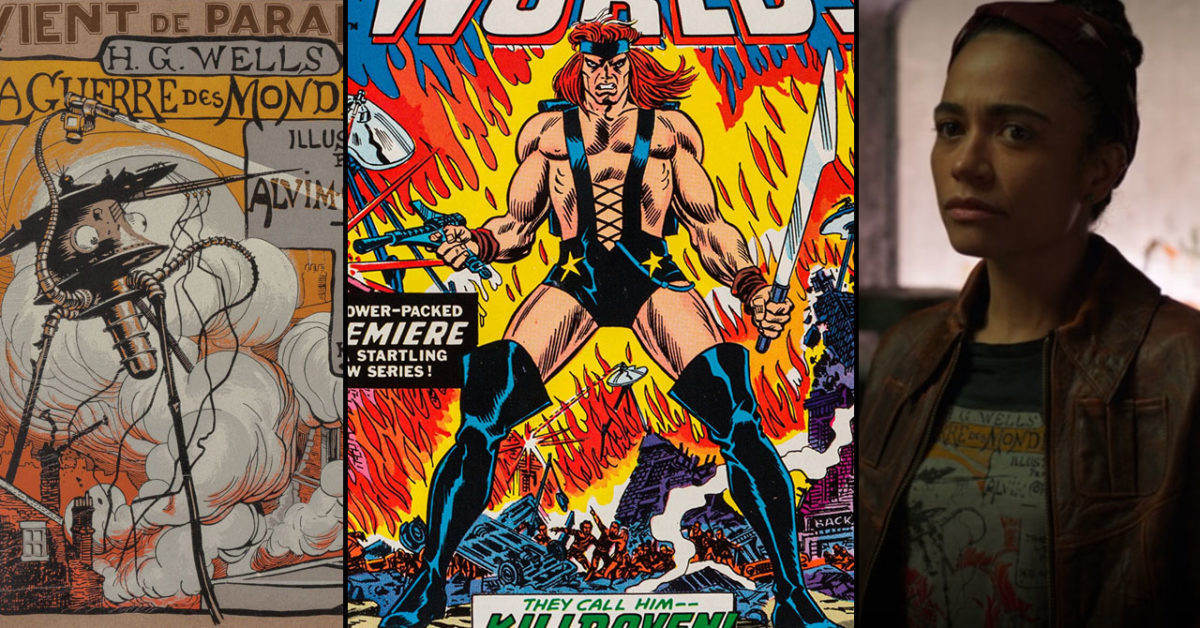 War of the Worlds by HG Wells is one of the most important science fiction stories ever written.  First serialized by Cosmopolitan and Pearson’s  Magazine in 1897, It’s the original alien invasion saga.  We’ve talked here before about the importance of War of the Worlds as a likely tool of propaganda at the dawn of both the Spanish American War and WW2, and that aside, the saga was folded into Marvel history as well, which lead to the creation of the character Killraven — and also includes some interaction with the Eternals.  Interestingly, the character Makkari (played by Lauren Ridloff) can be seen wearing a War of the Worlds t-shirt image based on the promo poster for the 1906 illustrated edition from Belgian publisher L. Vandamme, which includes spectacular artwork by Alvim Corrêa.  Could well be a coincidence, obviously, but it also just might be a nod to some obscure but fascinating Marvel Comics history.  Marvel folded HG Wells’ War of the Worlds into Marvel history with Amazing Adventures #18, building upon the Mars attacks mythos and introducing the character Killraven.  A fascinatingly obscure part of Marvel history that just might have a future in the MCU cosmos, there’s an Amazing Adventures #18 and #7 Group (Marvel, 1971-73) CGC NM- 9.2 White pages up for auction today at the 2022 January 16-17 Sunday & Monday Comic Books Select Auction #122203 from Heritage Auctions.

As co-creator Neal Adams told Arlen Schumer in 1998, on the creation of the character: “This character—later named Killraven—was traveling through his world, collecting things. And he would trade things in order to create and put together technology to fight the aliens. He carried his backpack all of the time and everywhere he went, he would trade off bits of technology for other bits until he could bring the world together, by putting the pieces back together again, to fight the aliens because civilization was being destroyed. I was putting together a science-fiction concept. This guy, in effect, was the son of Doc Savage—not the Doc Savage, but a Doc Savage-like character—his genes are imprinted with the desire to put the world back together again.”

An underrated character from Marvel history that just might have a future in the MCU cosmos, there’s an there’s an Amazing Adventures #18 and #7 Group (Marvel, 1971-73) CGC NM- 9.2 White pages up for auction today at the 2022 January 16-17 Sunday & Monday Comic Books Select Auction #122203 from Heritage Auctions.

View the certification for CGC Certification ID 1974567007 and purchase grader’s notes if available.