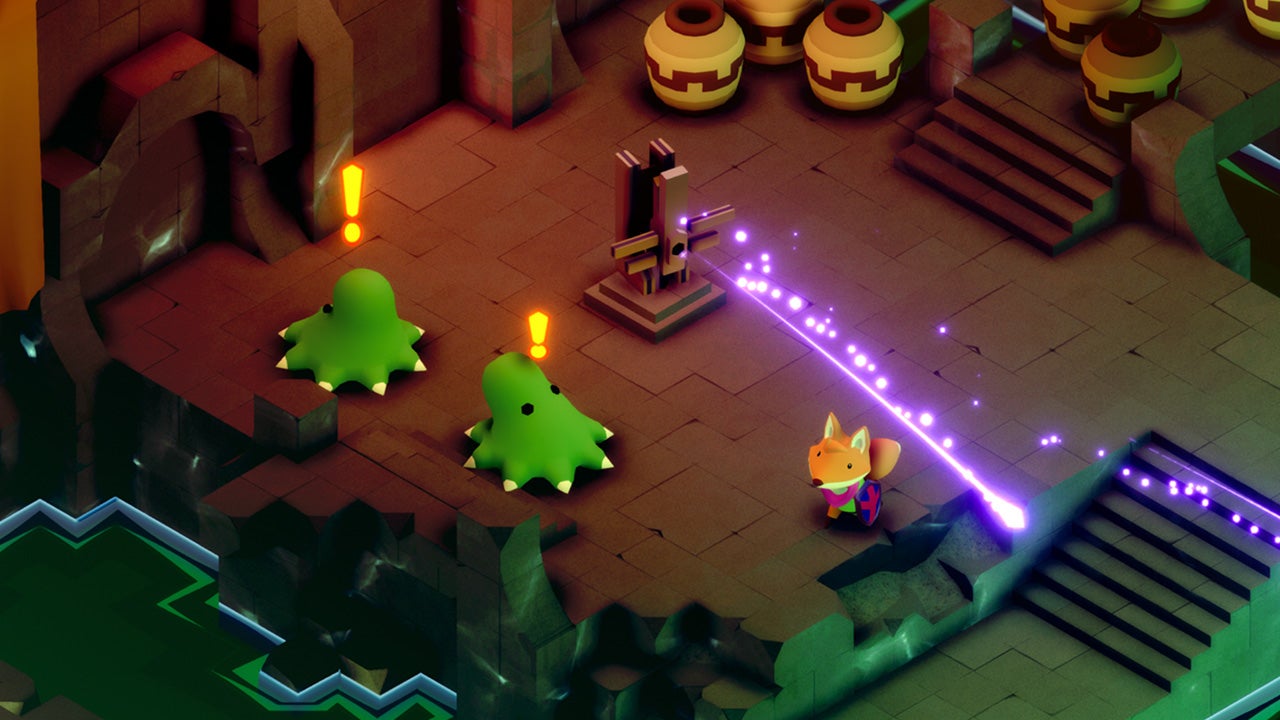 Don’t let Tunic’s first-glance charm fool you. Actually, nevermind – go ahead and enjoy that charm. It’s a gorgeous game with a colorful, almost Link’s Awakening-esque art style, beautifully serene music, and an adorable sword-wielding fox for a protagonist. Enjoy it, because even though Tunic may look like a simplistic isometric action-adventure that draws clear inspiration from the early Legend of Zelda games, it is in reality a decidedly hardcore experience that will fiercely test both your mind and your combat abilities. It’s not “kiddier Zelda,” as its bushy-tailed hero suggests (though Tunic himself should be made into a real-life plush immediately). Instead, Tunic caught me off guard with its challenging combat and complex puzzles, and once I regained my footing I found that it executes on that premise wonderfully.

One of my favorite things about Tunic is that, like the old-school classics it clearly takes inspiration from, it tells you nothing. Less than nothing, in fact: nearly all of its dialogue and in-game language is in an indecipherable script, Tunic never speaks, and there are no objective markers, hints, or breadcrumb trails to speak of. Everything must be intuited, which is done partly through exploration but primarily through the individual pages of the in-game instruction manual that you’ll find scattered about the world.

The booklet is modeled after what you’d find in the box in a NES-era game, complete with handwritten scribbles and annotations on some of the pages. This manual, too, is written in Tunic’s own language, but you’ll be able to suss out clues and directions from the images contained within – it doesn’t look like an IKEA instruction manual, but it’s a similar idea. Paying close attention to it is absolutely vital, as my cautionary tale proves; I ended up going into an early boss fight severely underpowered, but the frustration I felt as a result of that was my own fault for not reading the manual studiously enough to have figured out the key bit I was missing. It’s an exceptionally clever way to guide us through, even if it might have you seeking out the IGN wiki from time to time (no shame in that!).

It’s an exceptionally clever way to guide us through.

When you’re not nose-down in your pieced-together instruction manual, you’re out in either the overworld or one of the many dungeons where you’ll be slashing, blocking, dashing, and dodge-rolling your way to victory against Tunic’s wide variety of enemies. Importantly, you don’t really learn any new moves after you acquire the sword in the first hour; instead, it’s your tactics that will have to evolve. This includes making good use of not just that basic set of moves in new ways but also your items, the applications of which are also not explained at all. From sticks of dynamite to magic items later on – all of which you’ll find hidden in chests around the world and able to be bought from a terrifying but harmless shopkeeper – figuring out what each one does and employing them with smart strategies will lead to success far more often than quick button-mashing will. But sometimes you’ll need both.

My favorite among those items is easily the aforementioned sticks of dynamite you’ll have access to right from the jump. They’re useful all game long, particularly during boss fights. Sure, they’re nice for clearing out clusters of bad guys, but against a boss’s intimidatingly large health bar the TNT is one of the most reliable ways to take sizable chunks off of it. They benefit from a certain… unpredictability in how they work due to their physics. Don’t try to throw them at an opponent on a ledge, for instance; sure, Tunic’s got a pretty good arm, but the dynamite doesn’t explode on contact. Rather, it will hit your target, then bounce off and roll around on the ground – depending how it lands – before finally combusting. Enemies in or around water are effectively impervious to dynamite as well, as the lit sticks instantly fizzle out if they touch water… as you’d expect if you think about it.

Like the old-school classics it clearly takes inspiration from, Tunic tells you nothing.

No matter their size, your opponents are no pushovers – even the simplest of foes, like a Husher or a Autobolt, can drain your health rapidly. Their AI doesn’t stand out as overly smart or stupid, but each one hits with a wallop. Larger hero versions of the vanilla baddies of various types move slower but hit harder, and that healthy helping of boss battles are not to be taken lightly. Good luck. And if you’re wondering, you can only save your game at flame-lit shrines scattered about the world, and while doing so will restore your health and magic bars, the trade-off is that all of the enemies reset, too. That’s an obvious nod to Dark Souls.

Let’s talk a little more about those boss battles. They are many, they are memorable, and they are the good kind of nasty. There are no difficulty settings to choose from in Tunic; there is only “Figure It Out.” A simple multi-hit sword-attack combo is both hinted at in your manual pages and something you might discover on your own anyway, and it will be crucial to your chances of survival. Even more vital to your ability to stand toe-to-toe with Tunic’s bosses, however, is the dodge roll that gives you a very brief window of invincibility. Mastering it is a must, as is being able to quickly cycle through the items you might need that aren’t already hotkeyed to X, Y, and B. The moment you finally take down each boss genuinely feels like a victory well-earned.

There are no difficulty settings to choose from in Tunic; there is only “Figure It Out.”

As in a classic, top-down Zelda, Tunic has many Metroidvania-style layers to eventually peel back, and this, too, is part of what I love about it. When you see some place you can’t reach, or some door you can’t access, or something you can’t figure out how to activate, know that you will eventually get that tool – and when you return to see what’s been quietly making you crazy for many hours you’ll finally have satisfaction. Tunic’s world, in general, is a lovely place as well. The overworld is bright and colorful, while each dungeon has its own look and feel, from the traditional-fantasy spider cave at one end of the spectrum to the almost-sci-fi Monastery at the other.

But Tunic’s mysteries don’t all show themselves early on and torture you until the late-game. Rather, new head-scratching conundrums are constantly revealing themselves, meaning you’ve always got a new lead to chase if you get frustrated or hit a dead end on the trail you’ve been following. This includes the run up to and past the endgame, where the knowledge you’ve accrued acts as momentum that can lead you to a number of puzzle-solves and revelations in short order as you go back and figure out things that you’ve previously walked by or stared at dozens of times, but there’s still plenty of brain-bending to be done after the credits roll as well.

On that note, Tunic’s story is an interesting one as you piece it together, but admittedly not one I felt particularly moved by or satisfied with by the end. My 15-20-hour journey mattered a lot more than the destination for me, but perhaps you’ll feel differently.