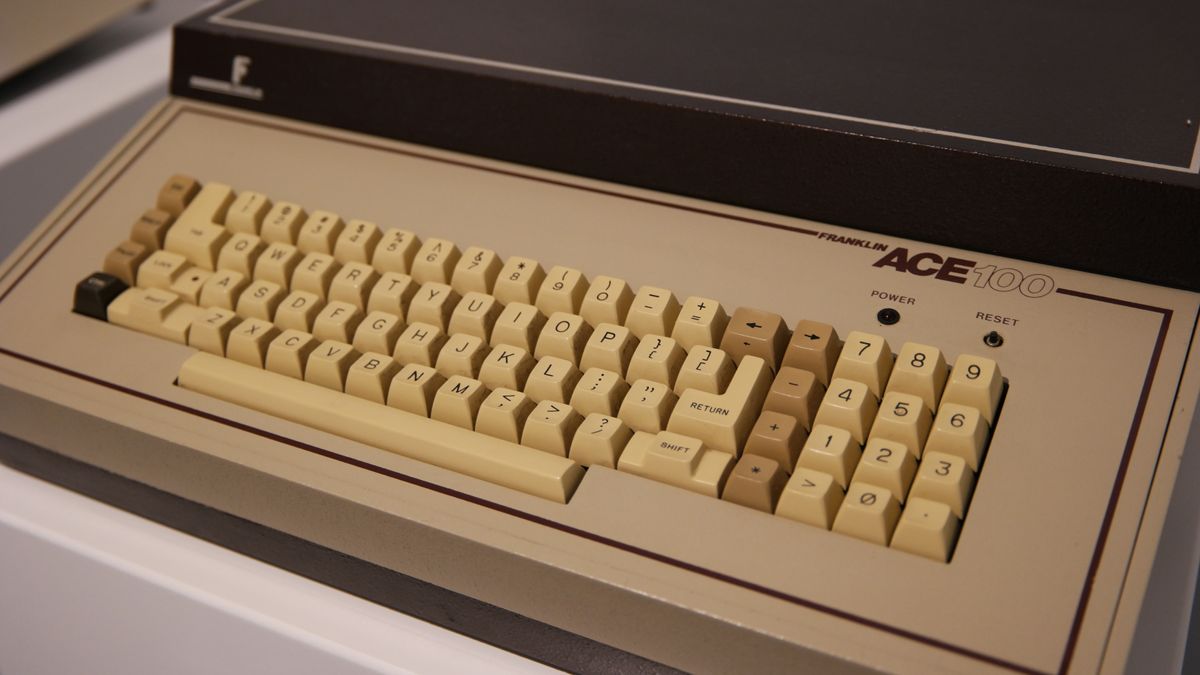 Apple is now probably better-known for the iPhone than anything, but the origins and a sizeable portion of the contemporary company remain in bespoke personal computing. The launchpad for everything was the Apple II, the first iteration of which was launched in 1977, an all-in-one home computer so successful it would be produced until 1993. Which meant, like many Apple products, it got copied.

In the early 1980s a company called Franklin produced a clone of the Apple II with the frankly unbeatable name of the Ace 100. I’d never heard of this hardware until writer David Friedman’s latest newsletter (opens in new tab) flagged up the most unusual aspect: the wild guidance manual that came with it.

The first 40 pages of the manual (opens in new tab) contain pearls of wisdom such as that personal computers “are just super fast, super expensive calculators” and its role in your life is “more as a flunky” than running it. It also opens with this semi-inspiring straight-talking:

“Since you’re reading this, some fast-talking salesperson has probably already persuaded you that the ACE will make your life complete. […] Dispel those doubts! Put your second thoughts aside and press on regardless! You CAN use your ACE to good purpose!”

Later comes a new chapter: The Ancestral Territorial Imperatives of the Trumpeter Swan. “Unless you were fascinated by birds, you probably wouldn’t turn to this section of the manual first.” Point taken. This is the ‘getting started’ part of the manual but, as the writer explains, if they’d just called it that then you might have skipped the introduction.

The whole manual is worth a skim because every single page seems to have a joke on it, and a lot are aimed at… computer nerds. This is perhaps the funniest thing about the Ace 100 manual: It’s clearly been written by someone with a healthy scepticism of the computer industry and the types who accumulate around it, who are also probably the only people who were ever going to buy this thing. It contains tips for not getting ripped off by your computer dealer, advises you ignore silly jargon like “bits and bytes”, and then best of all goes on to celebrate piracy and its own status as a pirated computer.

“Program manufacturers are natural paranoids” says the manual. Those bastards want you to pay for their work! Not when the ACE 100 is around, my friend. The manual includes an entire section explaining to the user how to circumvent typical 1980s software copy protection in order to make “personal backups”, before going on to explain that there are three types of crook in the computer world.

The first is “Them”, the salespeople that flog these things with over-inflated promises. The second is “You”, because as our manual explains the industry will treat you like a crook with their licensing deals.

“These licensing agreements typically stop just short of requiring you to sign away your life, your house, and your first-born child. Nobody in his right mind would sign one of them. But personal computerists do it. Are they of unsound mind? Possibly, but signing a licensing agreement doesn’t prove it.”

The third category of crooks is “Us”, Franklin themselves, who are selling you an Apple II clone with a copy of the Apple OS. The entry simply reads, and I can’t get an echo of Richard Nixon out of my head here, “we are not crooks”.

It may surprise you to know that the US justice system did not agree with Franklin. Apple sued the company for copying its operating system in the ACE 100 and the later ACE 1000 machines, which is now a landmark case in computer history: The first time a court ruled that a computer’s BIOS could be protected by copyright (opens in new tab). Franklin initially won but then lost on appeal, and by 1988 had to withdraw all its copies of Apple machines from the market. Franklin Computers remains a going concern (opens in new tab), though not quite on Apple’s scale.

David Friedman goes into much more detail on the manual in his writeup (opens in new tab), including tracking down the writer, Sal Manetta, former Franklin programmer Bob Applegate, and exploring the differences between versions. Applegate does have some idea why Manetta had the attitude he did: “Engineering was in a long, narrow building with no windows, nicknamed ‘the cave’. Sal was never exposed to engineers before Franklin, and we sometimes overwhelmed him. He often said ‘Abandon hope all ye who enter’ to people on their first visit to our building.”

Credit where credit is due though. Franklin may have started out as copycats, but it really was upfront about how much it hated licensing and copy protection:

“Someday, enough consumers will get fed up with this nonsense to put an end to it. It hasn’t happened yet though.”