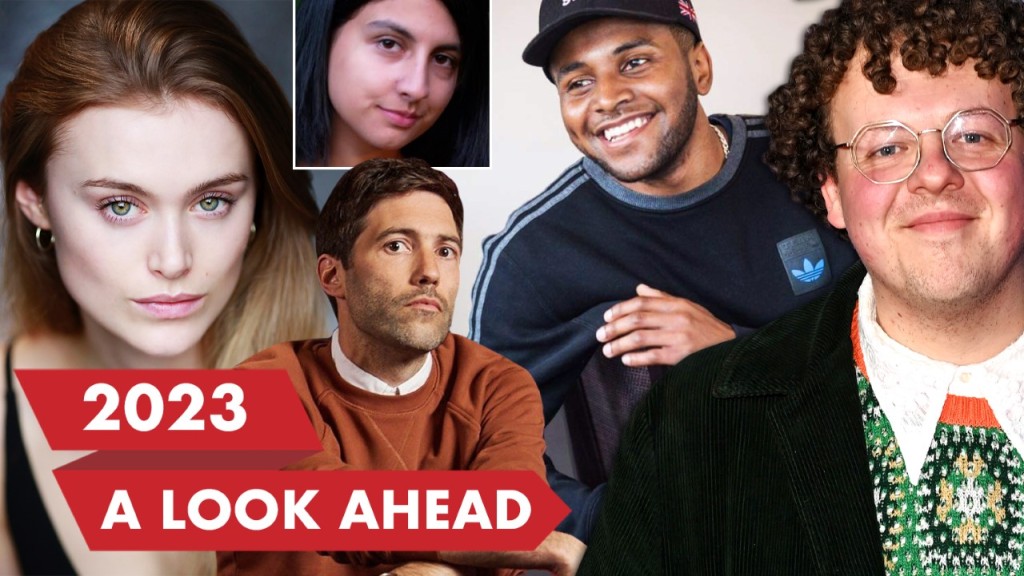 This Deadline feature, now in its third year, seeks to spotlight the work of the buzziest new British writers in the business.

This eclectic bunch may have different voices, but they all share something in common: They made their mark 2022 and there is the promise of much more to come.

They will soon boast credits on major new projects, including Ewan McGregor series A Gentleman In Moscow and Apple TV+ drama Criminal Record, with many striving to become showrunners in their own right.

Scroll on for our rundown of the five Rising Writers to watch out for in 2023.

Jack Rooke had been on the radar of TV executives for years, but it wasn’t until 2022 that he made good on the promise so many saw.

His charming comedy series Big Boys landed fully formed on Channel 4 last summer, tenderly depicting the early university days of a gay teenager who is wrestling with grief and his best friend’s depression.

But it was only when Big Boys featured on Celebrity Gogglebox, Channel 4’s popular TV-watching format, that Rooke felt like he had been truly embraced. “It was a really euphoric moment,” the 29-year-old recalls.

If it took six years for Big Boys to become an overnight success, Rooke reflects on this time as a blessing in disguise. He says it allowed him to create a more nuanced world with a bigger cast of characters.

“What I love about writing is thinking up insane things that can come out of characters’ mouths,” he says. “I’m into [writing] wonderful people that embody life and all of the moral questions and quandaries that we’re all trying to figure out.”

Rooke is in the thick of penning a second season, a process he describes as both “cathartic” and “self-sabotaging”. There are talks about exporting Big Boys to America, but no concrete news as yet.

Rooke spent time in a writers’ room this year, a process he loathed. He is too discrete to name the show, but explains: “You see how much influence you have and then you can get left completely uncredited … it was a bitter pill to swallow.”

When not scribbling, Rooke is a performer (he filmed an indie feature over the summer that he is not at liberty to name), radio storyteller, and sometime-documentary maker (he studied journalism at university).

“I measure [my career] horizontally rather than vertically,” he says. “It’s great if you’re on the up but — like all the writers, creatives and comedians I love — it’s about doing as many different things as possible.”

Rooke is repped by Curtis Brown.

“Everything is deeply personal,” Nessah Muthy says of her work. “It’s cheaper than paying for therapy.”

If writing is an antidote, it’s working. The 34-year-old is buzzing with energy as we chat over Zoom, the passion for her work pouring from the screen.

Muthy has recently finished penning episodes of A Gentleman In Moscow, the Paramount+ and Showtime historical drama starring Ewan McGregor, and The Winter King, the Bernard Cornwell adaptation for streamer ITVX.

She’s also juggling a regular job on Coronation Street (she’s scripted 22 episodes of the ITV soap and counting) and a slate of her own projects. More on those later.

Having been inspired to write by a drama teacher, Muthy went from ushering shows at the Royal Court to writing them. TV beckoned in 2020 when, just days before the first UK Covid lockdown, her trial on Coronation Street became a more permanent gig.

“My Mum is from Morden [London] and my Dad is from Mauritius. I was brought up as white, for want of a better phrase, but I have very brown skin, so there’s an inherent duality in who I am. That means that I am always shapeshifting and experimenting,” she says.

Her ambition is to become a showrunner after tasting creative autonomy with Cradled, her half-hour story about modern-day motherhood for Channel 4’s On the Edge anthology series.

She’s now animatedly developing two of her own series, one of which is with her Cradled collaborators at BlackLight, the Banijay-backed production company.

Her noughties-set autobiographical comedy-drama centres on a mixed-race teenager whose white crush accuses her father of conspiring with Osama bin Laden to commit the 9/11 terror attacks. A treatment has been commissioned by Channel 4.

The second project is in with The Forge, which made Jodie Comer’s BAFTA-winning drama Help. It tells the story of a mixed-race architect whose life is turned upside down when her husband murders a black man while out on police patrol.

Muthy is also working with Story Films to make a four-part drama for Channel 5, the broadcaster owned by Paramount. Story produced the critically acclaimed Witness Number Three for Channel 5 in 2022.

“I look for something political and then put it within a personal frame,” she says. “I hack my way in and find the human connection. I’m also a bit of a geek … so I will bolster that with massive amounts of research.”

Muthy is repped by Independent Talent.

If you’re familiar with the guy-tapping-head meme, you will have encountered the work of Tyrell Williams.

The ubiquitous gif is from Williams’ #HoodDocumentary, a 2015 YouTube mockumentary following a hapless “hood celeb” equipped with a “triple threat” of singing, acting and musical talent.

Kayode Ewumi’s performance as Roll Safe may be preserved in the amber of internet history, but it’s the details in Williams’ script that helped create a character watched by millions. Details like the permanently shirtless Roll Safe reaching for a leather jacket in his otherwise empty wardrobe. It’s a joke that becomes funnier with repeat viewing.

Williams says he’s been in love with storytelling since he was a child and #HoodDocumentary was his ticket to the entertainment industry. His raw YouTube episodes were turned into a more polished BBC3 series by Fudge Park Productions, the company run by The Inbetweeners creators Iain Morris and Damon Beesley. Williams is still working with Fudge Park today.

Theatre is his “first love” and the setting for the second act of his career. His Bush Theatre stage show Red Pitch tells the story of three football-mad teenagers coming to terms with gentrification in their neighbourhood. It has hoovered up awards, including clinching Williams the most promising playwright prize at the Evening Standard Theatre Awards.

“It’s about friendship in the face of regeneration,” he says. “What I like to do in my work is create an argument, create debates and allow all sides to be heard. I leave it to the audience to make decisions.”

Williams is now working with Fudge Park to adapt Red Pitch for television alongside other projects. The 28-year-old has written an episode of an unnamed Apple TV+ drama. He has been working on a project with Daniel Kaluuya and DC Moore, the playwright.

Deadline’s previous run-downs of rising British writers have all featured the top-voted script from the Brit List. This year is no different.

Enter Issy Knowles, the 27-year-old actress and model who penned Model Behaviour, a #MeToo comedy-drama set in the fashion industry. Her yet-to-be-picked-up project received a total of 17 recommendations, putting it two ahead of its nearest competitor.

Knowles wrote Model Behaviour from a place of anger. She was ready to participate in a TV documentary about harassment in fashion when the film was “ominously” shelved. She was not a victim herself but knew others who were and felt strongly about representing their stories. So she started writing.

In its first iteration, Model Behaviour was a stage show. Knowles took it to Edinburgh in 2018, at which point she says it “grew legs and started leading its own life”. She has been developing it for television with Carnival Films, producer of Downton Abbey, since February.

“I compare it to Greek mythology,” she explains. “You meet a character at the beginning of what’s going to be a really difficult journey. There’s a part of the character that maybe knows that, but human hope, belief and innocence carry her towards quite a dark ending.”

Knowles performed the show in Edinburgh, where somewhat inevitable comparisons were made to Fleabag, the one-woman show that catapulted Phoebe Waller-Bridge into the arms of Hollywood.

Fleabag is a big inspiration, Knowles says, remembering how she cried after running into Waller-Bridge on a London tube train. “I felt represented for the first time because my life is equally embarrassing, if not more embarrassing,” she laughs.

There is no fourth wall breaking in Model Behaviour, but Knowles says it has tonal similarities to Fleabag. I May Destroy You, which flowed from the pen of Michaela Coel, is another reference point.

Knowles has been contacted by an unnamed supermodel since topping the Brit List and Carnival is planning to take the show to market next month. Until then, Knowles has been hired as a writer on a French body-horror feature. She has also written a pilot for a Black Mirror-style dystopian drama.

“I kept finding the main character of Model Behaviour poking up in different stories, so the plan is to stretch myself,” she says.

Knowles is repped by Curtis Brown.

The drama, depicting a single mother (Nina Toussaint-White) who becomes the victim of witness intimidation, evoked the sensation of “fear piling up in layers”, according to one critic.

It was another suspenseful thriller that got him in the room at Witness Number Three producer Story Films: His Bush Theatre production Heather. Eccleshare cut his teeth in theatre, running the company Dancing Brick with his wife, and it is a medium he loves as much as television.

Eccleshare is currently being pulled in the direction of the latter, however. He has just penned an episode of Criminal Record, an upcoming Apple TV+ crime drama starring Peter Capaldi and Cush Jumbo.

He is also collaborating with Capaldi, the former Doctor Who star, on a comedy-drama pilot for Sky. Originally in with the BBC, the show is an adaptation of But He Looks So Normal!, Sarah Naish’s memoir about adopting five children. Eccleshare’s version is titled They Fuck You Up and is housed at Tod Productions, run by Vera producer Elaine Collins. Capaldi is directing.

“Sarah’s voice is extremely funny, honest and caustic,” he says. “She’s sort of like the best mother in the world and the worst mother in the world. She will leave her kids on the side of the motorway to make their own way home but also fully support them through their quite extreme difficulties.”

Eccleshare has a second project in with Sky: A Rush Hour-style buddy cop drama about the north-London Jewish neighbourhood watch group, the Shomrim. It is housed at Monumental Television, the Harlots producer run by Alison Owen and Debra Hayward.

Eccleshare delivers the pitch: “An ultra-orthodox Hasidic member of the Shomrim teams up with an energetic and ambitious young Black feminist cop from the Met. They both go rogue against their communities to make this extremely odd couple fighting crime in a heightened Hackney.”

So where does the 38-year-old want to be in five years’ time? “I’d like to have one or two series under my belt, but I’d take more of the same,” he laughs. “Being paid to do this is good.”

Eccleshare is repped by Independent Talent in the UK and 3Arts in the US.

Talking Point: What Are You Playing This Weekend? (January 28th)
The Last of Us Episode 3 Trailer: The Long Road to Bill and Frank
The OTT rhythm action of Hi-Fi RUSH surprise launches on Xbox, PC and Game Pass
Top Gun: Maverick Had A Good Morning For Oscar Nominations, Tom Cruise Not So Much
Kristen Stewart Already Has Another Directing Job Lined Up Ahead Of Her Directorial Debut