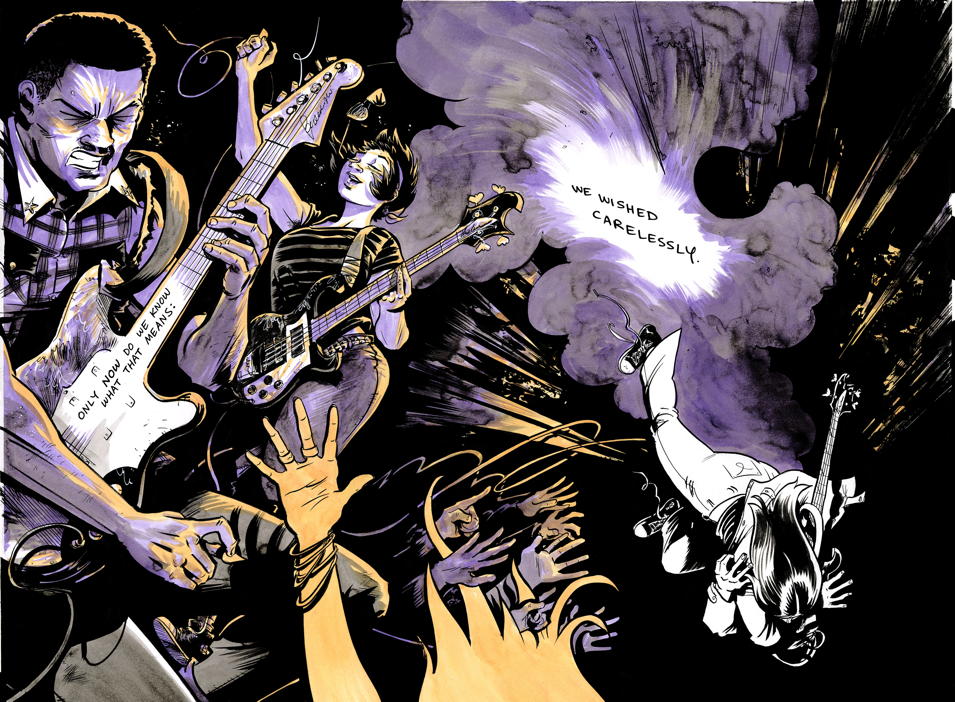 Welcome to part 2 of our annual Creator Survey. As we’ve done every year for 15 years, we asked comics creators, retailers and journalists to tell us what they thought were the biggest trends of the year. This year we also asked about what social media apps comics folks were thinking of moving to in the wake of Twitter’s decaying orbit. As you can see, in the responses, while Twitter has played a crucial role in so many aspects of comics over the last decade, finding a new platform – or even sticking around on social media – is an ever changing metric.

Thanks as always to everyone for taking the time to respond to our survey. You can read Part One here.

2023 Projects: Jeffrey Wells and I finished our long-running daily webcomic Skin Horse this year (full 12-volume print collection available now; visit skin-horse.com!), which has freed up a lot of time. Chris Baldwin and I are working on a sequel to our graphic novel The Dire Days of Willowweep Manor. I’m writing some graphic novels I can’t talk about yet.

Biggest story of 2022: All the dork-ass book bans transparently focused on shutting down work by and about LGBT people, people of color, and women. I have no more patience for this nonsense.

Guilty Pleasure for ’23: Still watching all the horror movies.

Mastodon, Hive, Twitter or something else? I’m hanging around Tumblr these days. It’s pretty chill.

2023 Projects: Coming out in 2023 I have the first Agents of S.U.I.T. book (February) that I co-wrote with Christopher Hastings and is illustrated by Pat Lewis and colored by Wes Dzioba. It’s a spinoff of the InvestiGators series I write and draw, which has its seventh volume (titled “All Tide Up”) coming out later in September. During 2023 I’ll be working on the second and third Agents of S.U.I.T. books as well as the eighth (and possibly ninth!) InvestiGators.

Biggest story of 2022: I have really been out of the loop on capital C “Comics” things lately. Maybe James Gunn taking over DC’s film division? Or the Batgirl movie cancellation (and all of comics-adjacent media cancellations, like Netflix’s Bone adaptation and stuff.) I guess Oni Press staff getting gutted was a pretty big deal!

Guilty Pleasure for ’23: Indiana Jones 5. More Marvel TV. More Star Trek. Those I don’t really feel guilty about, though, so I’m gonna say all the expensive LEGO sets that I’ll probably buy and never have time to put together.

Mastodon, Hive, Twitter or something else? Hive seemed pretty great at the start, but has been down a bit while they try to improve their overall system. Mastodon might end up the winner. But really I’d like to see a resurgence in places with a FOCUS. Message boards, forums, etc. Less “constantly talking over one another vying for attention” and more “here are places to have conversations about specific things.” Actual discussions, not just arguments with trolls, and I don’t know if anything that follows the Twitter format can truly accomplish that.

2023 Projects: My next solo graphic novel, FALL THROUGH, will be out through Abrams ComicArts around August. It’s an interdimensional 1990s punk soap opera that’s about power dynamics in creative spaces, a love letter to underground hardcore, and a pandemic therapy project full of sweaty people breathing on each other in enclosed, self-defined spaces.

Biggest story of 2022: It’s currently unfolding in real time, but most likely the collapse of Twitter and other social media platforms as communication and organizational spaces, and the scramble to remain connected and afloat in ways we increasingly took for granted pre-pandemic, and certainly moving into the future.

Biggest story of 2023: Horrifyingly, it will likely be a continuing increase in censorship and intimidation campaigns from the reality-averse far-right. They always play the long game, they’re just ramping up, and they’re desperate.

Guilty Pleasure for ’23: Reading more of the new wave of Hickman/Ayala/Duggan X-books! I haven’t been this excited to read X-Men since I was 14 years old.

Mastodon, Hive, Twitter or something else?I enjoy the simplicity of Hive, personally. But I think we should all take seriously the fundamental takeaway that all social media platforms will eventually collapse and be replaced– and that it’s still true that we are their product, not their customers.

2023 Projects: Barbara Brandon-Croft’s Where I’m Coming From; Benji Nate’s Girl Juice; Rina Ayuyang’s Man in the McIntosh Suit, Roaming by Jillian and Mariko Tamaki, and many many more brilliant projects.

Biggest story of 2022: Kate Beaton’s DUCKS landing on the bestseller lists for multiple weeks, making many publications best nonfiction books of the year (not just comics), and being compared to Maus and Fun Home, except published by an indie. 🙂 Julie Doucet being nominated president of Angouleme, her new book Time Zone J being featured in the NY Times twice. Randall Park directing Adrian Tomine’s Shortcomings. Hard to pick one!!!

Mastodon, Hive, Twitter or something else? Please god no.

2023 Projects: Excited about my upcoming series AEON with Joe Harris and John Connelly! (See preview below) Also excited for the Graphic Novel Release of Dark Wing!

Biggest story of 2023: The printing, supply chain crisis coming to a head.

2023 Projects: I expect to spend most of 2023 reading Noah Van Sciver’s “Joseph Smith” book while working on my own ambitious comics project I’m excited about but not ready to announce. Meanwhile, I’ll continue to make appearances supporting my 2022 book, “The Last Mechanical Monster,” and I have events related to 2019’s “A Fire Story” planned as well. I’m quiet but busy! Lurking silently like a shark, or at least cowering in the mud like a flatfish.

Biggest story of 2022: The passing of the old guard. It seems like a generation of both mainstream and Underground comics talent has died all at once: George Perez, Carlos Pacheco, Kevin O’Neill, Justin Green, Diane Noomin, Aline Kominsky-Crumb . . . It’s a great cumulative loss of history and talent.

Biggest story of 2023: I predict that one of the major comic book companies will publish a story drawn by artificial intelligence, there will be an enormous uproar and outrage about it, and they’ll sell a bajillion copies.

Guilty Pleasure for ’23:  I’ll take whatever I can get.

Mastodon, Hive, Twitter or something else? Mimeographed newsletters, stapled and mailed with a “Peanuts” stamp.

2023 Projects: Beyondtopia: Legends #2 & #3 are hitting comic shops in January and March 2023. I’m working a educational comic for the NYC Department of Education.

Biggest story of 2022:  Gender Queer’s win in Virginia thanks to the CBLDF

Biggest story of 2023:  AI will take over comics

Guilty Pleasure for ’23:  I have been loving “Snoopy en Español” a lot.

Mastodon, Hive, Twitter or something else? We have yet to see the new comics twitter. If you’re smart, email is the best place to go.

2023 Projects: just keeping it all together in spite of everyone’s forgetting the pandemic

2023 Projects: Makers #5 and 6 by Dave Howlett (@paskettiwestern) are coming soon, new issues from our pals at Grandway Comics are on the way as well. [Editor’s note: The Makers elevator pitch: imagine a fictionalized version of the Image Comcis creators being in a Galaxy Quest type situation. Order here.]

Biggest story of 2022: doomsday is upon us, comics are dying….

Biggest story of 2023: doomsday is still upon us, comics are still dying….

Guilty Pleasure for ’23:  hoping to get to comicspro, the only comics industry conference, to see old pals, settle some old scores and do our best to improve the comic book world

2023 Projects: More webtoon reviews! Listicles to give people who haven’t read any webtoons a better idea of what might be up their alley!

Biggest story of 2022: Kadokawa owning majority stake in J-Novel Club. Yen Press, another NA publisher, is also owned by Kadokawa, and will now provide printings for certain JNC titles (novels and comics). This partnership between Yen and JNC happened at ANYC, where JNC also announced their plans to dive further into audiobooks, a field largely untapped in the manga/anime industry until this year.

Biggest story of 2023: My gut feeling is that Korean/Chinese digital comics will be carving a deeper niche in the market as time passes on. KOCCA (Korea Creative Content Agency) is a Korean government agency that promotes Korean content internationally–including digital and print comics like webtoons. They had a presence at NYCC this year, and brought over several publishers to gauge interest and growth in the North American market, to positive results.

Guilty Pleasure for ’23: Tapas, Tappytoon, Webtoon, Manta, and Pocket Comics will continue to bring over ALL of the Romantasy (Romance Fantasy) from Korea and China, and I will continue to devour all of it like a starving beast.

Mastodon, Hive, Twitter or something else? If Twitter doesn’t implode, I can only see it staying there, unless it becomes absolutely unusable. I can also see Discord communities becoming more prevalent, as they’re more akin to AOL Chatrooms than social media spaces like Facebook or Twitter.

2023 Projects: Really excited to see Woshibai’s English translation of 20KM/H out! And also Keum Suk Gendry Kim’s new book, THE NAKED TREE. I also can’t wait for the world to read the new Jillian and Mariko Tamaki’s book ROAMING and THE MAN IN MCINTOSH SUIT by Rina Ayuyang! Jazzed to also have Saito Nazuna’s OFFSHORE LIGHTNING out as well!

Biggest story of 2022:  Seeing all the reviews of Kate Beaton’s DUCKS and following its release. Having worked on it for so long, and seeing it on the bestseller lists, as well as reading how Kate’s story resonates with so many was really gratifying. And of course Julie Doucet winning the Grand Prix at Angoulême 🙂

Guilty Pleasure for ’23:  I’m looking forward to the Nimona movie!

Mastodon, Hive, Twitter or something else? Tumblr? I do think I’ve seen a ton of people return to the good ol’ newsletter via Substack.

2023 Projects: DANGER AND OTHER UNKNOWN RISKS with Erica Henderson – – it’s me and Erica reuniting after Squirrel Girl to tell an all-new story super important to us both, and taking place in a post-apocalyptic world of magic and adventure – with a pretty big twist. We’re both super excited for this.

Mastodon, Hive, Twitter or something else? I wish I knew! Right now I’m reexamining the assumption that we need social media at all

2023 Projects: Continuing to select graphic novels for my library system’s Adult Graphic Novel collection. Hoping to work with my city’s Center for the Arts and our local comics shops to run a series of programs helping people in our community create short comics about their recovery from Hurricane Michael, a Cat-5 hurricane which devastated our part of the Florida Panhandle in October 2018.

Biggest story of 2022:  Due to some major family issues over the year, I didn’t pay too much attention to news, but one thing i couldn’t help but notice is that in-person comics conventions definitely returned in 2022; I also noticed that a number of people who attended these conventions got infected with COVID.

Guilty Pleasure for ’23:  Sharing more comics with my grandsons.

Mastodon, Hive, Twitter or something else? I’m just hanging back and waiting to see what develops.

Biggest story of 2022:  The explosion of manga in North America

Biggest story of 2023:The continued rise of manga and webtoons

Guilty Pleasure for ’23: James Tynion’s continued runs on THE NICE HOUSE ON THE LAKE and THE DEPARTMENT OF TRUTH, big ideas sci-fi!