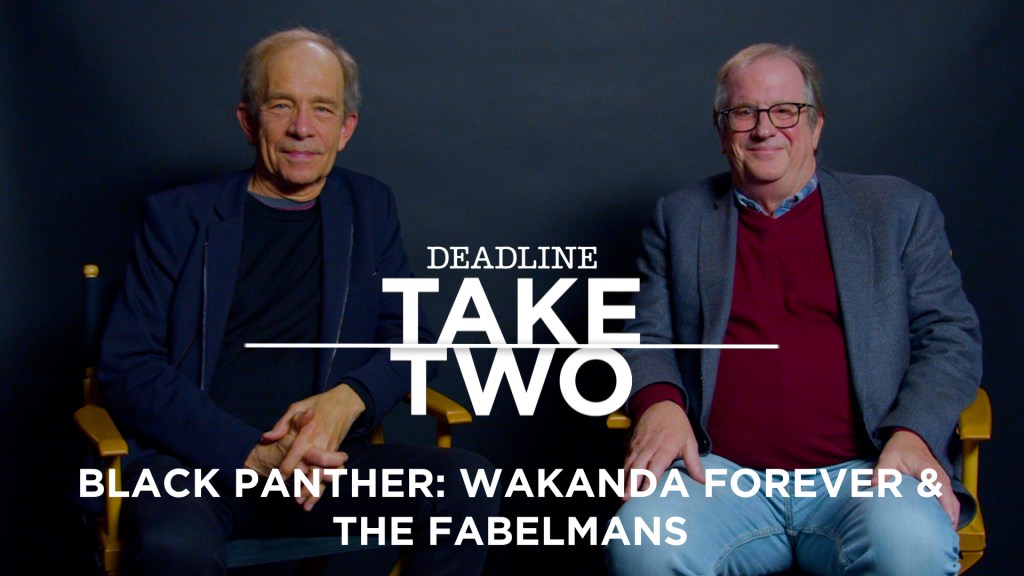 Editor’s note: Deadline presents the 39th episode of its video series Take Two, in which Pete Hammond and Todd McCarthy tackle the artistry of films just opening in theaters every weekend. Each has reviewed and written about the craft for decades and built a remarkable breadth of knowledge of films past and present. What we hoped for when we asked them to do this was a concise, mature and thoughtful conversation comparable to what we saw from Roger Ebert and Gene Siskel.

Two major movies hit theaters beginning this weekend and both promise to make a real impact with moviegoers, albeit in wildly different ways. We go back and forth on the merits of both the highly anticipated sequel, Black Panther: Wakanda Forever from Marvel, and the highly personal film from Steven Spielberg, The Fabelmans.

Although both have been reviewed formally here on Deadline (Black Panther: Wakanda Forever here and The Fabelmans here), this is our opportunity to really take a deep dive on each and get down to the key question: Are they worth your time and money, or do they disappoint?

You might be surprised at the answers here, and for both of these your only chance to see them will be back in the multiplex (at least for some time) with theater owners anxiously awaiting these marquee titles to help jump-start the exhibition business after a devastating pandemic. With Marvel and Spielberg serving up their latest, you can bet there is much to talk about.

Hammond has been Deadline’s Awards Columnist for the past decade, covering what now seemingly is the year-round Oscar and Emmy seasons. He is also Deadline’s Chief Film Critic, having previously reviewed films for MovieLine, Boxoffice magazine, Backstage, Hollywood.com and Maxim, as well as Leonard Maltin’s Movie Guide, for which he was a contributing editor. In addition to writing, Hammond also hosts KCET Cinema Series and the station’s weekly series Must See Movies.

McCarthy is a veteran trade publication film critic, columnist and reporter who has also written several acclaimed books and documentary films. He served two stints on the staffs of Variety and The Hollywood Reporter and extensively covered film festivals internationally for both publications. His film Visions of Light: The Art of Cinematography won the best documentary prizes from the New York Film Critics and National Society of Film Critics associations, and he won an Emmy for writing the documentary Preston Sturges: The Rise and Fall of an American Dreamer. He also directed the documentaries Man of Cinema: Pierre Rissient and Forever Hollywood.