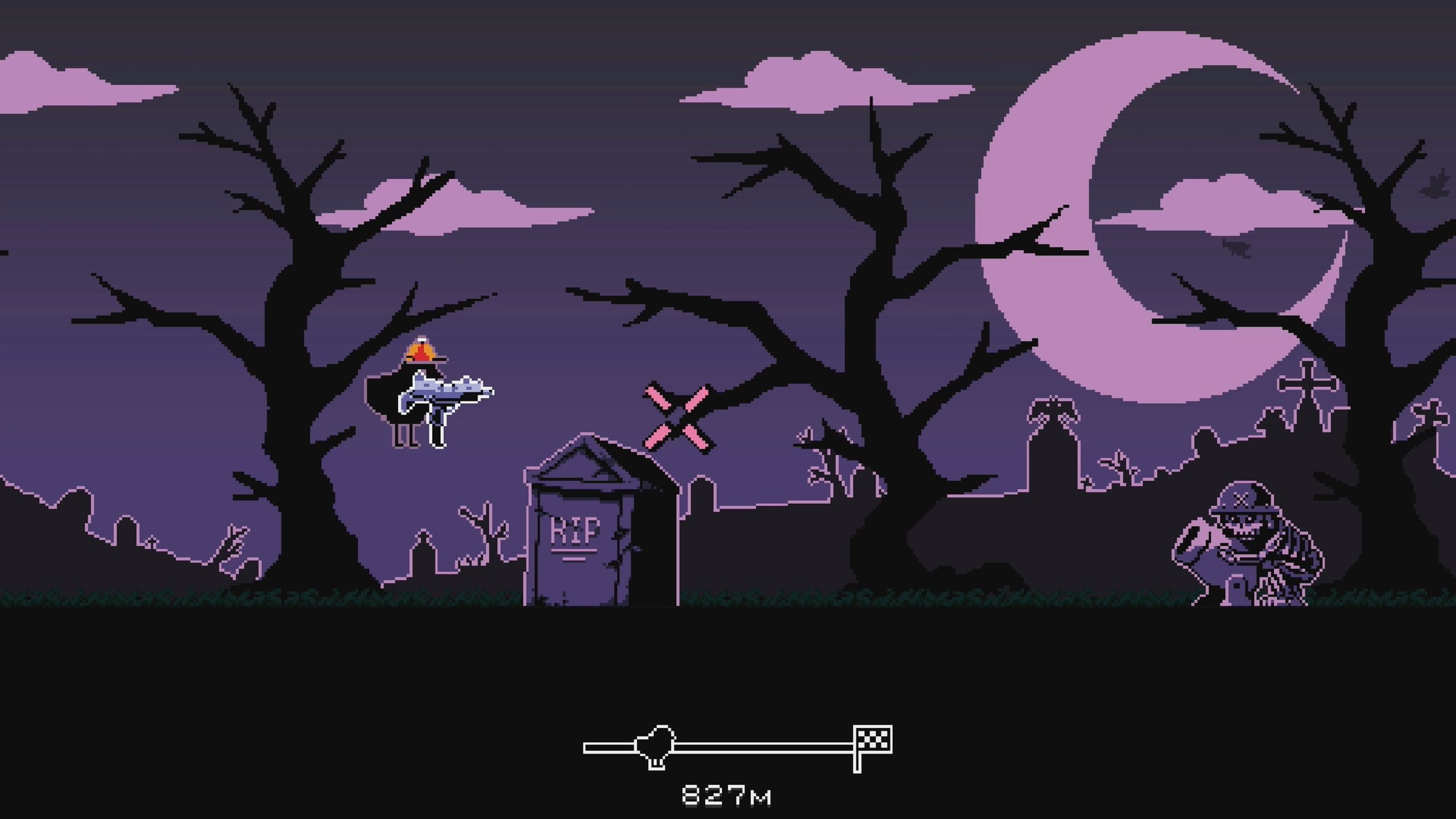 The beauty of reviewing video games is that I get to play all sorts, often those that I wouldn’t usually consider. This can sometimes be a blessing, or a curse. When I booted up Super Chicken Jumper I knew straight away what to expect. So I took a deep breath and steeled my nerves for what was to come.

Eastasiasoft’s latest is a quickfire platformer that has you speed running through levels littered with obstacles. Dying is very much part of the game, and when it happens you respawn right back at the start of the level to go again. There are six worlds to zip through, each consisting of five short runs that last for around a minute each (if you somehow avoid death), culminating in a boss battle at the end.

Away from the main game, you will unlock several challenges to conquer along with an Endless mode set across each world. Challenges usually change up playing conditions, such as having you permanently miniaturised which makes completing your run less straightforward. Endless mode does what it says in the tin, and features an online leaderboard for you to see just how well your skills stack up.

As you will probably have guessed, the gameplay is very simple. You’ll run automatically in an “on-rails” fashion, with the ability to move side to side, jump and attack. To begin with you’ll fly through the levels with only basic obstacles to clear, and enemies to slash and shoot.

However, before too long things start to get very hectic resulting in the final world being an absolute nightmare. It’s meant to be difficult, clearly, but expletives came pouring out of my mouth at such a rate I had to switch Super Chicken Jumper off for a little while. If you aren’t fussed by hard-as-nails platformers, there’s nothing for you here.

For those that are, Super Chicken Jumper is a no frills take on the genre that just about does the job. The Challenge and Endless modes don’t add much longevity as there’s nothing fundamentally different about them, due to the simple and repetitive gameplay. These will only really appeal to the completionists (or sadists) amongst you. I know that after the main game I’d pretty much had enough.

Rather than making the most of the opportunity to offer something a little different, it turns out that boss battles are also a bit of a grind. You’ll come up against an enemy with a few different attack patterns, and it’s simply a case of waiting for your opportunity to strike. However, as with the level layout the order will be randomised on every attempt. This can leave you waiting for a good while until you can do some damage, at least before you unlock some ranged weapons anyhow.

As you progress your chicken will build an arsenal of weapons, from a samurai sword to an uzi and everything in between. Different abilities will also become available in the form of wearable accessories, giving you temporary shields and the power to double jump to name only a couple. Switching these between attempts is key to finding your way to beat the level. Your little chicken also looks pretty cute in its snazzy hats, it must be said.

Super Chicken Jumper opts for the very much overdone retro graphical style which looks alright, if not incredibly basic. There is a loose plot that ties the platforming together, but it’s mostly gibberish to be honest. The script is also peppered with jokes that more often than not miss the mark.

This is a game which is relentlessly predictable. From the first minute you will have the measure of it, but in fairness Super Chicken Jumper does just about enough. If you’re a fan of such games, you’ll probably enjoy it and at £4.19 it’s hard to complain really. Oh, and there’s a pretty easy 1000G up for grabs too…

Super Chicken Jumper is a distinctly average option for fans of the genre; a game that doesn’t do much wrong, but also isn’t about to impress. There’s a binary choice here as to whether this is a game you need in your library.

Super Chicken Jumper is on the Xbox Store

George R. Robertson Dies: ‘Police Academy’s Chief Hurst Was 89
Armie Hammer Rape Accuser Fires Back At His Attempted Suicide Claims
Immerse yourself in the magical world of Hogwarts Legacy
A Year of Free Comics: Admire the cuteness of THE PLAYPEN
Todd Howard: From Movie Games to Skyrim – Did You Know Gaming? Feat. Furst