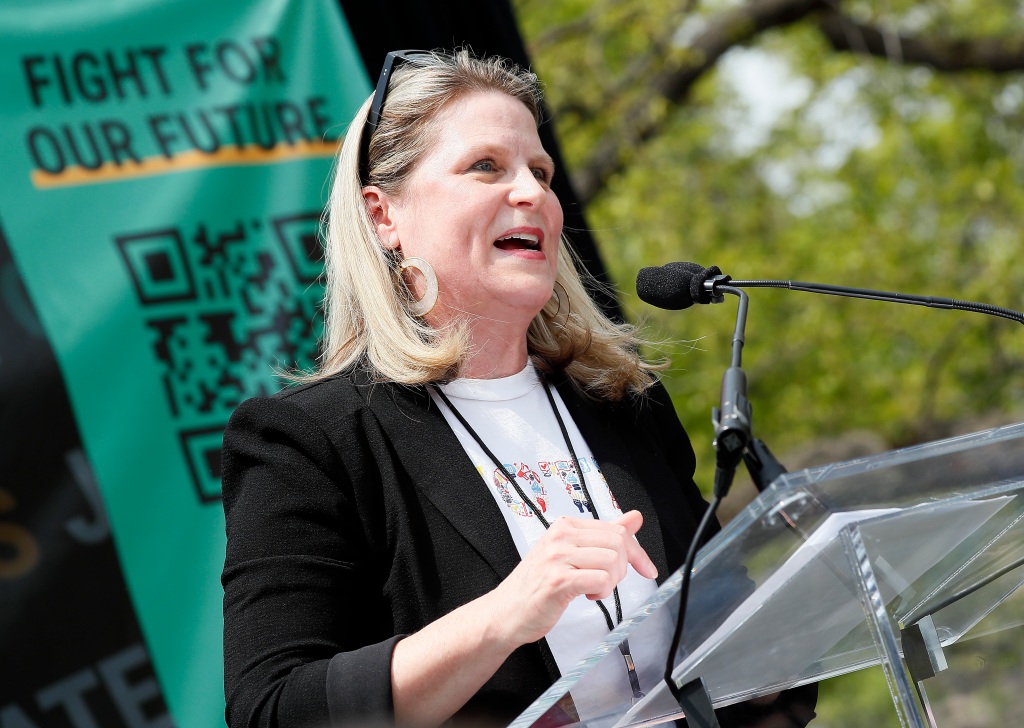 SAG-AFTRA is celebrating the upcoming Labor Day weekend with a podcast featuring Liz Shuler, president of the 12.5 million-member AFL-CIO, which represents 57 affiliated unions, including SAG-AFTRA, and workers in every ZIP code in the country.

According to Shuler, the future of organized labor is bright.

“We are stronger together,” Shuler said on the podcast. “By being an affiliate union of the AFL-CIO, it brings the full breadth and scope and power of 12.5 million working people to each other’s fights. And SAG-AFTRA is on the front lines of so much. A lot of people think, ‘Oh, well, SAG-AFTRA, are they really workers?’ Well, of course, because you work in an industry like Hollywood, or you are someone in broadcast, you absolutely have the same issues that working people in other professions have: safety and health concerns, discrimination and harassment concerns, and making sure you’re being paid equitably for your work.

“So, what that means is we get to bring the voices and solidarity of more people together to support each other in those fights. And I think of the work that you (SAG-AFTRA) did during the pandemic, for example, being on the front lines of creating safety standards that the rest of us could learn from. So that’s just one small example of what we do to help each other. And it’s a great example of how we show up for each other.”

“And I think in every industry, where there’s workers and management,” Crabtree-Ireland said, “there’s always a need to balance out the power of management. And I don’t think anyone’s ever found a better or more effective way to do that than by workers acting collectively. And our members are workers, for sure. Anyone who’s been to a film or television set, or a broadcast newsroom or to a recording studio, definitely knows that.”

Stressing the interconnectedness of unionized workers, Shuler pointed to representatives of the labor movement joining the picket lines during SAG-AFTRA’s 10-month strike against the Bartle Bogle Hegarty advertising agency in 2018-2019, and to SAG-AFTRA members showing up last year to lend support to striking ice cream cake workers in New Mexico who were asking for a dollar-an-hour pay raise. That, she said, “is a great example of how we are more powerful together.”

Reflecting on the historical gains labor unions have achieved for union and nonunion workers alike – such as the five-day workweek, paid holidays and child labor laws – Whitehair noted that the AFL-CIO and SAG-AFTRA are uniquely poised to address the challenges that workers face in the future. One way they do that, he noted, is through their annual Labor Innovation & Technology Summit, which is a joint partnership between SAG-AFTRA and the AFL-CIO, which he said are “continuing to look to the future.”

“I know you’ve been quite active within SAG-AFTRA on these issues,” Shuler said. “And I know you have a committee within your union that’s really taking this on, feet first, as they say, and jumping in because technology has impacted your industry probably more than any industry. If you think about the evolution and where we’re headed from here, it has been a tremendous opportunity for we in the labor movement to partner with SAG-AFTRA on this Labor Innovation & Technology Summit because we can get access to the best thinking, the cutting-edge strategies, on how to tackle technology so that it’s working for working people. What are the guardrails we need to be putting in place in our contracts and to be able to share that with the rest of the labor movement?

“So that’s what this is about as a collaboration. It’s a partnership for building for the future because we know that highly skilled union workers are what our economy needs as technology is disrupting our workplaces and the ground keeps kind of shifting underneath our feet. But we’ve been there before. The labor movement has been constantly evolving and changing as technology has changed over the last a hundred years, frankly. And so, the trick here is that as new jobs emerge, we want to make sure the labor movement is the center of gravity for helping workers navigate that change, to help them upskill and find that pipeline to the next opportunity and make sure that those jobs that are emerging are good paying union jobs. So, we’ll look forward to working with you on the next Summit. And I know we also partner around the Consumer Electronics Show, which gives us a window into what the next innovations are going to be and how we can make them work for working people.”

“It’s been so fun to do that with the AFL-CIO,” Crabtree-Ireland said. “And speaking for SAG-AFTRA, we certainly have learned a lot and seen things coming down the road by virtue of that type of investment in looking to the future. And so, it’s been a really tremendous partnership, and I’ve observed some of the other unions who’ve been present when we’ve done those programs have really taken a lot away from that experience as well.”

Shuler also noted that the AFL-CIO has a Technology Institute to develop expertise on the future of work and how best to bring the labor movement together in dealing with emerging technologies. “So, we’re trying to leverage the power of labor to really shape technology and innovation for working people,” she told the SAG-AFTRA leaders. “I don’t need to tell you how the pandemic actually has accelerated the use of technologies at work. And we’re seeing all kinds of reports on how workers are being surveilled. And I even learned about this new technology called a ‘mouse jiggler,’ which for people who are working at home and are being monitored every 10 minutes by their employers based on their keystrokes and how they use their computers.

“And so, we need to be leading the charge on how to have a voice at the table; how to include a worker perspective when we’re building out these new regimes of how we’re gonna be working in new and different ways. And so we think that organized labor has to be at the center of these transformations to make sure that we have a role in shaping that future, because we really are the only force in the country, if you think about it, that has enough power to make sure that working people can shape that future and shape it together for our union members, but also for the rest of working America.”

Pointing to a new Gallup poll that found that 71% of the American public support unions, Shuler noted that that figure is the highest since 1965, and up from 68% last year. “So, the trend is going nowhere but up because workers are waking up to their power,” she said. “And they’re saying, ‘We’ve worked through this pandemic. We got our country through it. We often were on the front lines as essential workers. We were called essential one day and treated as expendable the next. Companies are now making billions of dollars coming out of this pandemic. It can be better. Like we need to stop and gut check ourselves. Like we’re not gonna just sit back and take it anymore. We have the power to rise up and demand better.’

“And so that’s where all this organizing is coming in that we’re seeing all across the country. Workers are finding their voice. They’re standing up. They’re taking risks. They’re going on strike. They’re leading walkouts and picket lines. And you know, also ‘quiet quitting,’ as we’ve read in the newspapers. So, I think it’s a moment in time. It’s an inflection point for the labor movement. How do we harness the energy and the momentum, and all of these positive feelings people have about unions into actual union growth?”

“The stars appear to be aligned,” she said. “And if we don’t take advantage of this moment, then I don’t know when we will. We have a pro-union administration in the White House, the most pro-union president in our lifetimes. We have the public with us – 71% approve of unions. And we have working people who are rising up and ready to take risks.

“And so that’s what gives me great hope, great joy, to be leading in this moment and being there with you alongside you and your members to show that the labor movement is more relevant and vibrant and bold and modern and inclusive as ever. And our doors are open wide. We’re really the only institution left that can bring people together to make the change that workers need in this economy. Because as you know, it’s not working for all working people. If we’re gonna close that inequality gap, if we’re gonna fight for equal pay for women, and fight against discrimination and harassment, and for civil and human rights, then we have to do it with a robust, powerful movement of working people.

“And that’s what we think the AFL-CIO and our unions will be for the future and the next generation, and as the future of work evolves. So, this is a very exciting time to be in the labor movement.”