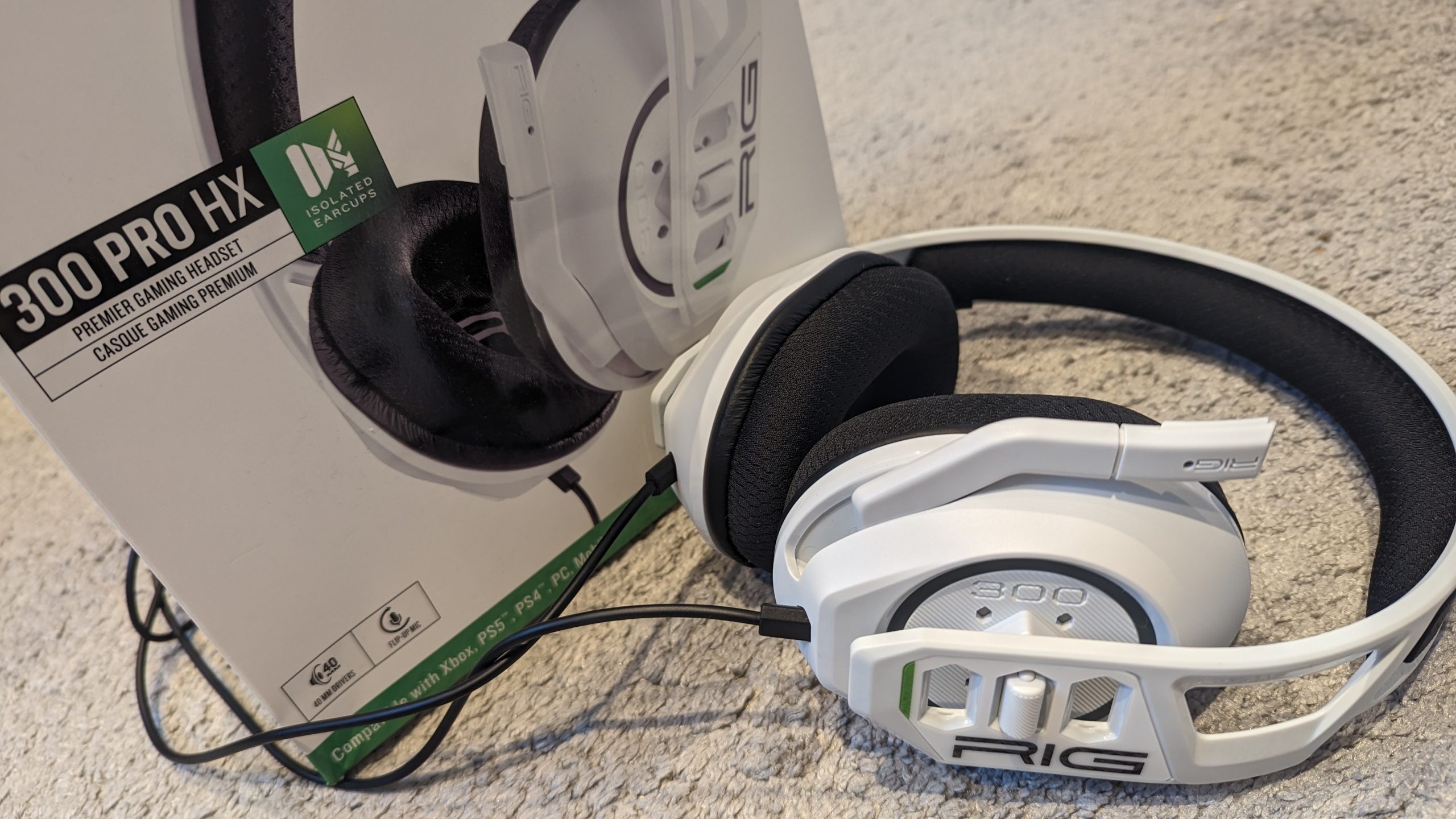 We’ve long been fans of the RIG series of gaming headset, well before Nacon snapped up the brand and started slapping their own name over the box.

How has that love been founded? Well, in a few words, thanks to their seriously lightweight nature, their decent sounds and the range that they cover.

There are top of the range options via the RIG 800 and some mid-point offerings with the RIG 500 and the 400 series. But there are also some cheap entry level headsets that will be of appeal to many. It’s with that where the RIG 300 PRO HX sits.

We’re not exactly sure why the RIG 300 comes with a PRO moniker attached, as this is about as bargain basement as you are going to get. But PRO it is and there’s little to fault in terms of how it all works, feels and sounds. Yet on the flip, there’s not much to get excited by either.

Coming in at the very bottom of RIG’s range of headsets – at least if you discount the one-cupped 100 series – you can forgive the 300 PRO HX for not being equipped with any fancy features or ideas. And that’s a bit of luck because this is a plug-and-play headset that will happily sit on your head, ensuring you’re able to become immersed in the games that you are playing. It won’t do much more than that though.

A wired headset, the 300 PRO HX will work with any device that has a 3.5mm port attached. Whilst that means you can use it for listening to music or playing Game Pass titles on your mobile or laptop, for many it’ll be the more standard gaming scene with which it appeals.

In that respect it’s perfect to plug into an Xbox controller, powering any gaming sessions that take place. It allows for that with immersion too, mostly thanks to the isolated earcups that fully surround your ears, letting you lock yourself away from the real world as you enjoy that of the virtual.

Those earcups are mighty impressive, complete with a nice soft touch and feel that means you can wear the RIG 300 for hours at a time, listening in to the pretty decent sound pushed out via the integrated 40mm drivers. For the size, we’ve been delighted by the tones that have come across through a variety of games; not a hint of distortion or confusion has come about no matter how loud we’ve had the 300 turned up.

It is however the comfort which is a huge part of what makes a RIG headset and thanks to the super lightweight skeletal frame and the 229 gram weight, you can throw this around without worry. There’s no sign of a sliding headband though, with the 300 instead utilising a pop-and-push external size amendment, adorned with under-band padding. It’s a system we quite like, well versed with it being on RIG sets, particularly as it means that the 300 is always set up for your own particular needs.

White in colour with RIG branding and black details, the 300 PRO HX looks okay too. It’s not going to win any awards or owt, and it won’t be a headset to take to the local show and tell, but it doesn’t need to be – this is a €29.90 headset after all.

But it’s thanks to the plastic vibes and light nature where this wins the day. Highly flexible and feeling like a feather both in hand and on head, there are times when you’ll forget you are wearing this headset, such is its sheer ignorance to heft. It’s something that RIG headsets have been defined by, and it’s only in the feeling where the belief kicks in.

What else do we have on this budget piece of kit? Well not much really. There’s not a single button to be found on the headset itself (something which is no shock when you again consider the price) with just an online volume slider and mic mute switch sitting halfway down the cable which connects the headset to your controller.

This cable splits near the headset itself, permanently running separate wires into each of the cups. This may initially annoy, but putting up with that cable soon becomes second nature.

Further, there’s a flip-up mic running off the left hand cup, although that flip is only to keep the mic boom out of the way when time calls for it. Extremely diminutive, concerns may be raised in regards how well this mic would be able to pick up your voice before transmitting it to the online world, but in use there have been no such problems. It does the job required of it – a feeling that the RIG 300 PRO HX decides to run as a whole.

In fact, come to the RIG 300 PRO HX headset knowing that you’re getting access to a seriously cheap gaming headset and expectations are not just met, but very much surpassed. There’s a thought that you may wish to draw your cash reserves together in order to go for a bigger brother, like the 500 or – should money allow – the range topping 800, however if you’re just looking for a cheap, cheerful, plug-and-play gaming headset that can be thrown around, used across multiple systems and still happily get on with the job, what RIG have put together in their 300 PRO HX should well be pencilled onto the wishlist.

Huge thanks go out to Nacon for providing us with the RIG 300 PRO HX headset for review. You can purchase one for yourself by visiting Nacon direct. Expect to pay around €29.90. Bargain!

Replay | Resident Evil 2 (Remake)
The Last of Us Part 1 will be delayed on PC, but not by much
Charlie Thomas Dies: Rock And Roll Hall Of Famer With The Drifters For 60 Years Was 85
Celebrity Mountain Lion P-22 To Be Memorialized At Public Wake, But Controversy Looms Over His Remains – Watch Livestream
The Good Doctor Season 6 Episode 12 Review: 365 Degrees