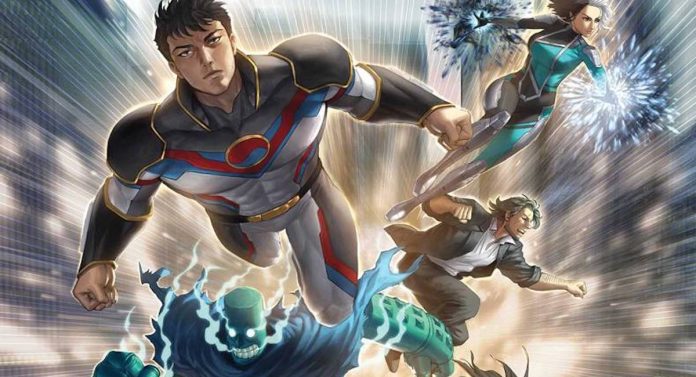 In November, Marvel Comics will release Tiger Division #1. The debut issue of the new five-issue miniseries comes from the creative team of writer Emily Kim, artist Creees Lee, colorist Yen Nitro, and an as-yet-unannounced letterer, with main cover art by Lee. Today, ahead of the issue’s preorder cutoff date, The Beat is pleased to present an exclusive first look at the issue, which features the origin of team powerhouse Taegukgi.

The defenders of South Korea take center stage! In their first ever solo series, you’ll learn more about TAEGUKGI, a powerhouse with a heart of gold; LADY BRIGHT, a card-wielding sorceress; MR. ENIGMA, a street-brawling demigod; THE GENERAL, a living totem; and GUN-R II, an android with an attitude. They’re joined by fan-favorites WHITE FOX and LUNA SNOW to form an unstoppable team. Created by our own unstoppable team, writer EMILY KIM (SILK) and artist CREEES LEE (MARVEL VOICES), this is one epic series you won’t want to miss!

Tiger Division made their first appearance last year in the pages of the Taskmaster miniseries from writer Jed MacKay and artist Alessandro Vitti. With only a handful of appearances thus far, this new miniseries will be the first chance readers will get to learn more about the team’s roster.

In a statement back when the series was first announced, writer Emily Kim expressed her enthusiasm at working on Marvel’s newest superhero team:

“I’m so excited to be launching Tiger Division’s first limited series,” Kim said. “As a lifelong fan of comics, I never thought I’d get the chance to write for an all-Korean group. Hopefully it’s not the last and there will be many more Tiger Division stories to come.”

Check out the exclusive unlettered preview below. Tiger Division #1 (of 5) is due out in stores and digitally on Wednesday, November 2nd. Preorders for the issue are open until Monday, October 3rd.

Disney Dreamlight Valley is getting a Toy Story update in December
A Starship Troopers FPS game is coming from the Squad devs
Top Comics to Buy for November 23, 2022
Cobra Kai 2: Dojos Rising Review
Cyber Monday gaming PC deals 2022: there’ll still be rig discounts as far as the eye can see