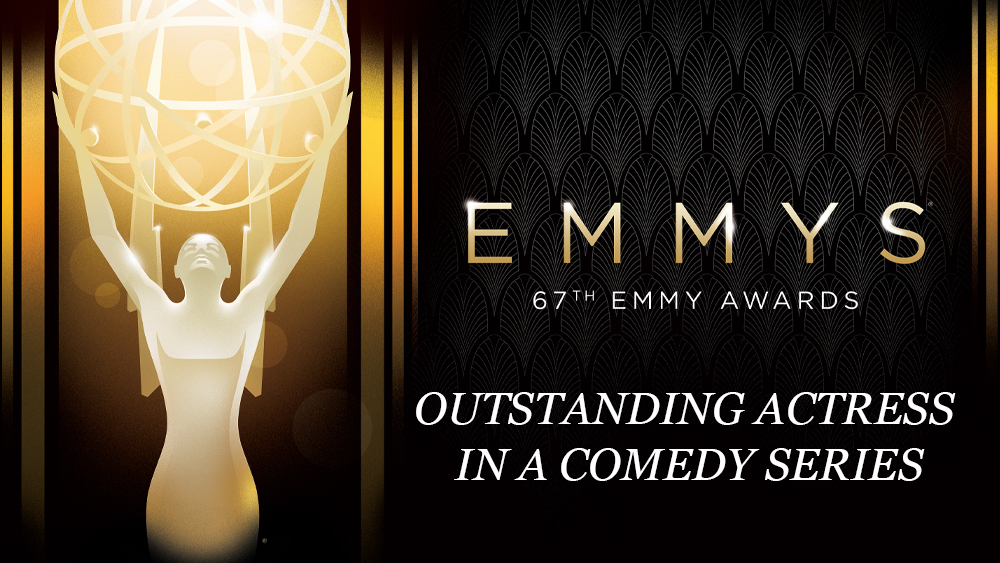 Two past winners compete against four challengers with varying degrees of Emmy history. The main question hovering over this entire category is just how much of a lock Jean Smart is, and if there is possibly anyone who can beat her to what would be a fifth overall Emmy win and second in a row for Hacks. The untried contenders are Elle Fanning and Quinta Brunson, the latter possibly in the same boat as Phoebe Waller-Bridge, who knocked it out of the park winning four Emmys for Fleabag, including this one. Can Abbott Elementary’s star/creator/writer Brunson achieve a similar feat?

She started her Emmy history with a Guest Actress nom for House of Cards in 2015, but it has been steady-as-they-go ever since she won for Mrs. Maisel in 2018, and she has been nominated for the subsequent three seasons she has spent playing the irresistible role. The first season of the show just blew the roof off the Emmys, but others have been dominating ever since, suddenly making Brosnahan looks like she has an uphill climb to regain the winning mojo.

Brunson is a delight in the lead role of her own creation, and might benefit from previously being the least known in this excellent group of women. But might voters think they could give her a prize in one of the other categories where she is nominated, or can she pull off a personal sweep? Precedent shows a recent Emmy trend rewards those in a role nominated for the first time in the category, like Jean Smart, Phoebe Waller-Bridge, Catherine O’Hara and Rachel Brosnahan. If that vibe continues, Brunson might be advised to make lots of room on her shelf.

Cuoco, a TV veteran, is back in the Emmy hunt for this globetrotting series that isn’t your traditional sitcom. The best thing she has going for herself this year is clearly the continuing love voters and audiences have for this star, even if the show itself failed to find its way back into the Comedy Series race. She lost last year to Jean Smart and I’d bet on that exact scenario playing out once again, no matter how deserving Kaley might be.

Well, voters are finally discovering how great The Great really is, and even if the show didn’t find its way into the top Comedy category for Hulu, Fanning and her co-star Nicholas Hoult have both become first-time Emmy nominees for this frothy and witty period comedy series set in 18th Century Russia that allows the wilder and funnier side of Fanning to be on full display.

Yet another star whose show didn’t make the cut for Comedy Series this time around, but who has received her third Emmy nod in this category. She’s still without a win, but with seven nominations overall, including three for her other series, A Black Lady Sketch Show, Rae is highly deserving, and this nomination represents the last chance to honor her for this acclaimed HBO series. Will that be enough?

As Deborah Vance, the Joan Rivers-style Vegas stand-up comic, this veteran star and four-time Emmy winner found the role of her career and instantly became unbeatable in the category last year. That’ll most likely be the case this year, too. Smart, who also benefits from being a beloved figure in the industry, simply has such command of this showbiz character that it is hard to imagine that voters are going to stop rewarding her achievement anytime soon.

Alex Borstein is up again for The Marvelous Mrs. Maisel in a role she already won for three times. Is she unbeatable? Voters obviously love her, but with the series out of commission last year, Ted Lasso’s equally irresistible Hannah Waddingham swept in and took the honors. Logic would say it comes down to these two past winners. Except 2022 also marks the end of another two-time winner here: SNL’s Kate McKinnon. Waddingham, despite that great funeral episode, could be hampered by the fact she is competing against two of her own co-stars, Juno Temple and Sarah Niles. Another Hannah is once again in the hunt — Hannah Einbinder of Hacks — and she is certainly formidable. I would also caution that first-time nominees Sheryl Lee Ralph and Janelle James of Abbott Elementary are each very possible despite facing off against each other. A tough call.

RimWorld Biotech expansion lets you have kids and mess with genes
Open the finest Bunny Park on Xbox, PlayStation and Switch
Nintendo 64 (N64) – Did You Know Gaming? Feat. Brutalmoose
The WD SN850 1TB SSD is down to £105 with a heatsink in a historic price drop
Cartoon: Ron DeSantis’s new comedy prank show, YANK CRANKERS!