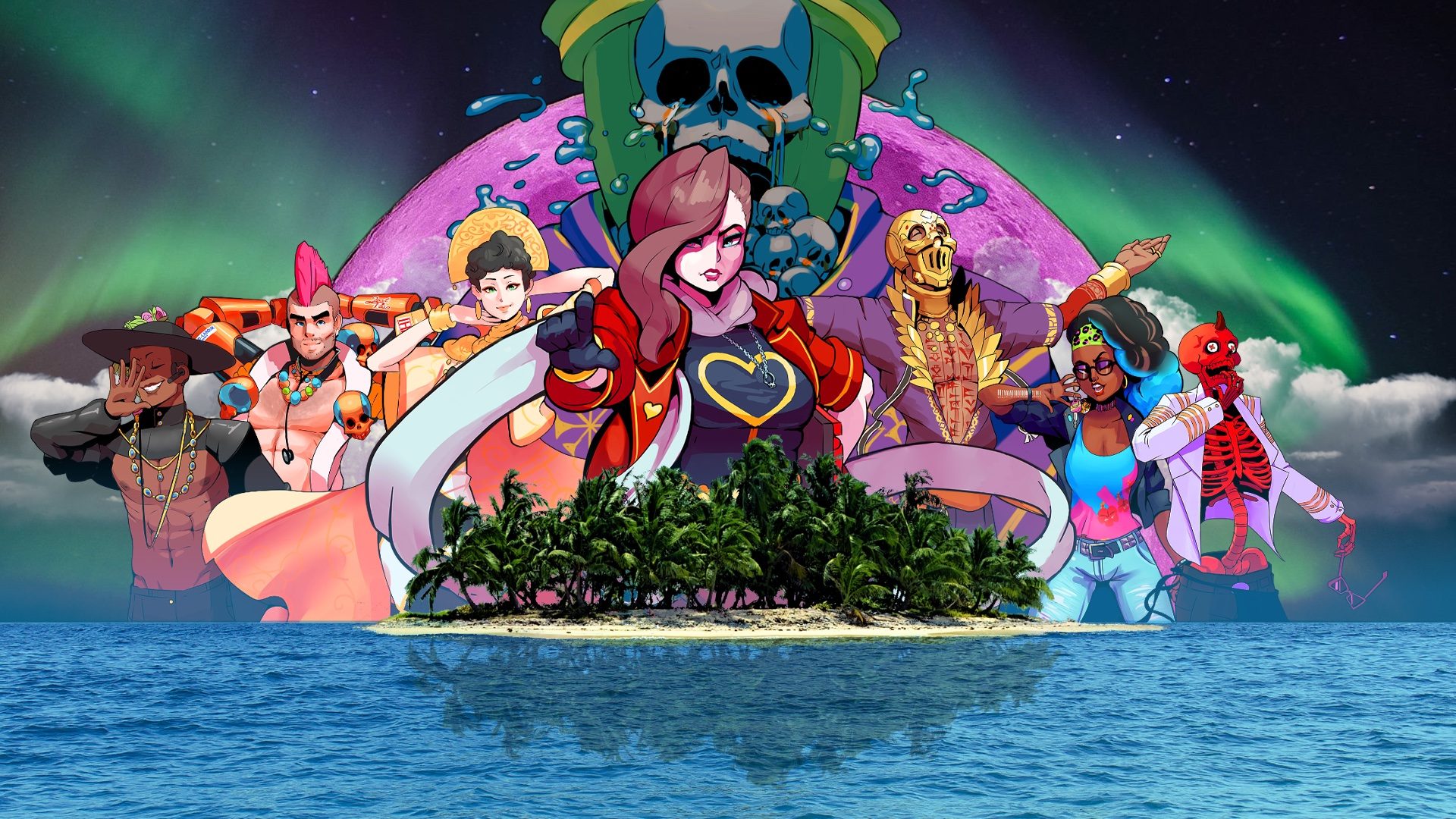 How do you start a game? That is such a difficult question. There are so many things a game needs to do for a player at the start; introduce them to the world, teach them how to play and most importantly, hook them in. We spent a lot of time and effort on the beginning of Paradise Killer to try to get it right. I haven’t done the maths on this but I know that the start of the game is the most commonly shared video clip from Paradise Killer on social media so I guess something worked!

In Paradise Killer you play Lady Love Dies (LD), an investigator brought out of exile to investigate the crime to end all crimes on the bizarre Paradise Island. We knew that the start of the game would depict LD arriving on the island and introducing the player to the world. As we were making an open world game, we wanted to start by showing the player the whole world at the start. The island is quite big and you can explore the whole thing, but you don’t usually get to see the scale of what you are about to explore in games. We hoped that giving the player a bird’s-eye view of a huge vista that was ready for them would blow them away and whet their appetite for exploration.

With this in mind, our initial story draft started with LD arriving by plane, allowing the player to see the island as they flew over it. It wasn’t very exciting and it didn’t feel right for our game, so we shelved the idea and worked on other things while we thought about it. Eventually Phil, our technical director, said to me: “I want an intro like the beginning of Bayonetta”. That’s quite the challenge! For those who haven’t played it, the beginning of Bayonetta sees the player fighting a huge army of angel freaks on a ruined cathedral that’s plummeting through the sky. It is one of the best game beginnings anyone has ever made, it really makes an impression. I thought to myself, “how do we make something like that in a first person narrative game?”

After abandoning the arriving by plane intro, the story had developed in other ways and we had decided that the exiled Lady Love Dies was going to be in some kind of prison cell called the Idle Lands, high above Paradise Island. One of the issues we had to solve was working out how we’d get the player down from there at the beginning of the game. Our first idea was to have Lydia pick you up in her car. Lydia drives a car that can travel through dimensions so it would make sense that she could find a way to be parked way up in the sky in the Idle Lands.

However, we just didn’t think that was very exciting. Luckily, we had decided early on in development that there wouldn’t be any fall damage in the game because the game is about free exploration and we didn’t want to punish that. Alongside needing to figure out a good intro, we also needed a good way to communicate this, so we decided to make the player jump down from the Idle Lands at the start of the game. We tried it out, and taking a great big running jump and flinging yourself into oblivion felt great! As they fell the player could see the whole island stretched out below them and start picking out places of interest for their investigation. It served many purposes.

This fall down the island felt great but we knew we could make it more stylish. I love late title cards in games, so we decided to put the Paradise Killer title card when the player lands from their fall. It is a great moment of impact, and tying the two together worked really well.

An early version of the moment of landing

We were pretty happy with the intro at this point, but we knew we could still push it further.

At the time we were working with a simple sample library for our music, and we hit upon the idea of taking one of the short, looping tracks and removing all the low end and percussive elements to make it a more stripped back, ambient track which you’d hear whilst exploring the Idle Lands prison. We originally had a plan to pull the remaining layers in as you unlocked the prison gates to Paradise Island, but we later had the idea to change it so that it would start transitioning as you jumped off the ledge, with the music swelling as you plunge into the abyss of crime.

When we bought in our composer Barry “Epoch” Topping, he built further upon this by providing original music, as well as creating a wonderful bass slide which happens as you launch yourself out of exile. This ended up being an incredibly powerful moment which people talk to us about excitedly all the time.

The intro to Paradise Killer took a great number of iterations to get right but it was more than worth it. The beginning of Paradise Killer teaches the player the rules of exploration and excites them about the open world, but most importantly, it surprises them. One of the key questions we ask ourselves about our games through development is, “what can we do here to surprise players”? Surprise is a wonderful emotion that elicits joy and helps engage players with the game.

Thankfully we seem to have achieved what we set out to do with Paradise Killer’s intro and got this moment right. Players love the surprise of leaping down to Paradise Island, and we love seeing them get excited by it!

Arms Fall Off Boy and more Legionnaires get the spotlight in latest images from LEGION OF SUPER-HEROES animated film
Behind the Cartoon Sci-fi Artwork of Roguelike Shoulders of Giants – Out Now
Dead Space Remake Review
Commencement Addressed: Josh Trujillo on Blue Beetle: Graduation Day
Action Comics by the 50s