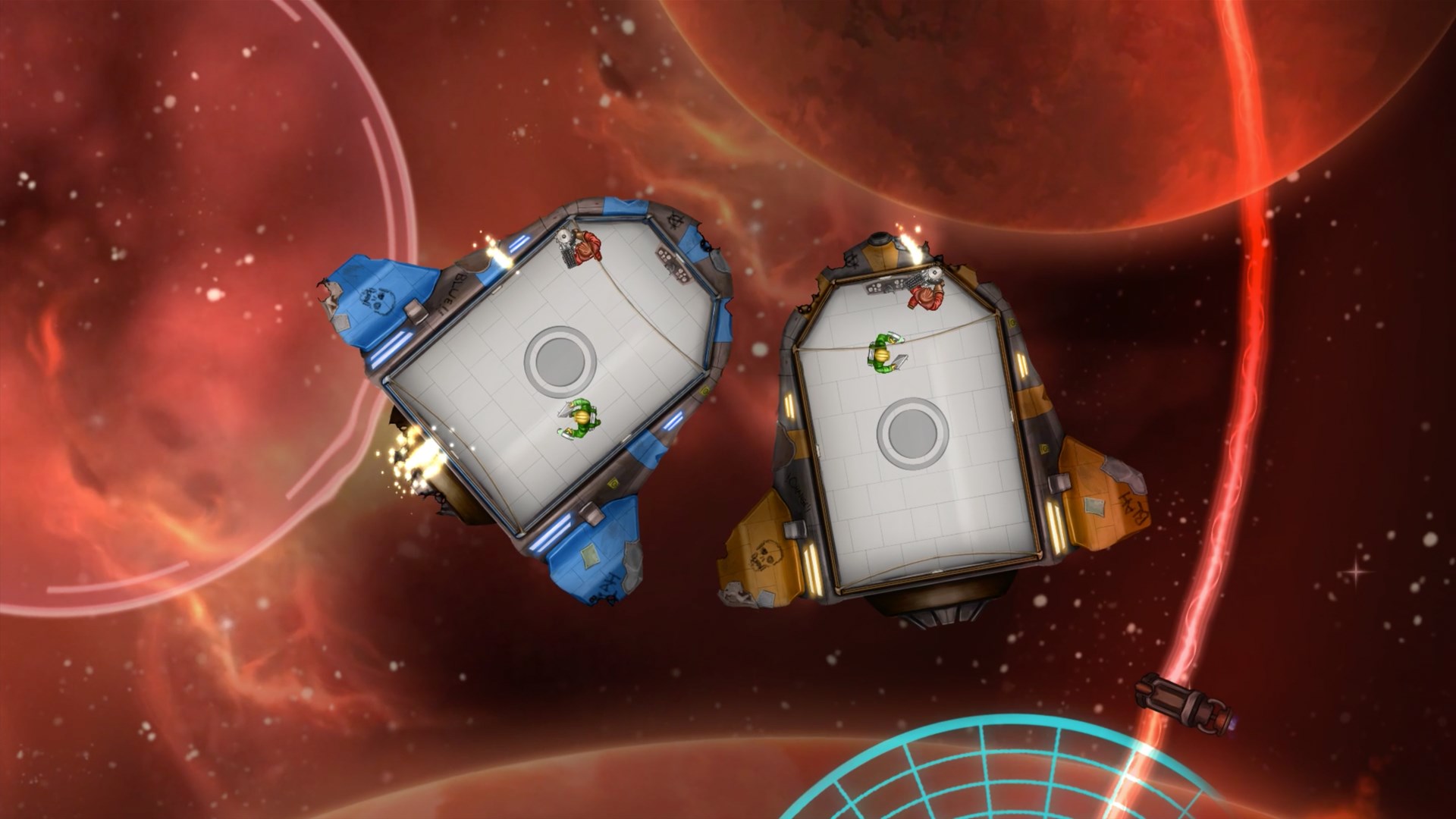 Coming from developers Upstairs Digital is a new entry into the fairly crowded “party game” genre; a game going by the name of Oxyjet.

Set in outer space, Oxyjet features an interesting premise – you have to damage your spaceship in order to make it move. Yes, you heard that right and the only way to make your ship move is to make holes in it so that oxygen leaks out, pushing the ship in the opposite direction to the hole. Can this fairly simple premise really be the basis for a whole game? Well, yes, yes it can. Is it enough though? Well, grab your helmet, we’re blasting off.

As this is a party game, there’s very much a lack of story going on. In fact we find ourselves in an arena with a circle in the centre and we have to, in effect, play Sumo wrestling with spaceships; just without giant nappies. And that is the long and the short of it. Best draw this paragraph to a close, huh?

Oxyjet doesn’t particularly look the best either and ‘basic’ would be one way to describe what is on display. ‘Functional’ would be another, slightly kinder way. Basically, we have a circular arena, with a ring in the centre of it, and two spaceships, viewed from a top-down perspective. The spaceships have no roofs, or else they all have panoramic sunroofs, as we can see the crew scurrying about inside as they fight to stay alive.

It’s pretty simple in terms of sound too – the hiss of escaping gas and the crunch of spaceships hitting each other, is about your lot.

But then we get onto the gameplay and this is where any good party game lives and dies. Graphics and fancy presentation help, without doubt, but if the basic gameplay loop is solid, greatness can occur, as we saw in 2022 with Vampire Survivors.

At heart, Oxyjet is a cooperative experience with each spaceship being built for two. While you can fly it solo, it is a lot easier with two people, so I roped in my unwilling accomplice – my eleven year old son – to try it out. Now, when playing together, it is the job of one person to make holes in the ship in order to move, and the job of the other to mend said holes once we are underway, hoping to preserve our oxygen. Communication therefore is key, and in all honesty, for short bursts the idea is actually kind of fun. Getting a decent speed up, smashing into the enemy ship and sending them flying across the screen is pretty exhilarating, especially when both ships are down to their last few millimetres of oxygen.

It isn’t just a game of shove, however, as there are various power ups that can be picked up and utilised in an attempt to win. There are many to choose from, although their appearance is random, ranging from a simple repair module that helps you keep you intact, right up to a teleporter that swaps places with the other ship. Add into this various environmental dangers on certain arenas, such as laser beams that will damage anything they hit (nudging an enemy ship into a laser to protect yourself is quite amusing) and you can see that Oxyjet is a bit more involved than just a playground shoving match. I mean, it’s not Age of Empires, but still, we take what we can get, don’t we?

In addition to the single player modes of 1V1, 2V AI or 2V2 (assuming you have enough controllers), there is also the possibility to play online, either against friends or random strangers via the medium of the internet. And all I can imagine is that everyone online has run out of oxygen, as I’ve not been able to get in an online game for love nor money. You’d expect this with many indie games, so you’ll be best off keeping in mind the local cooperative modes that Oxyjet brings. In fact, you may find yourself being the only pilot in the whole universe.

Oxyjet does bring a new idea to the party table, and being a big fan of a co-op game experience it would be churlish of me to mark it down too much for being a fairly slight experience. But playing solo is very dull, and while knuckling down with a partner against the AI is better, it still misses the ultimate competition that comes from a real live adversary. With a dead online scene, it just wasn’t meant to be with Oxyjet.

Oxyjet is on the Xbox Store