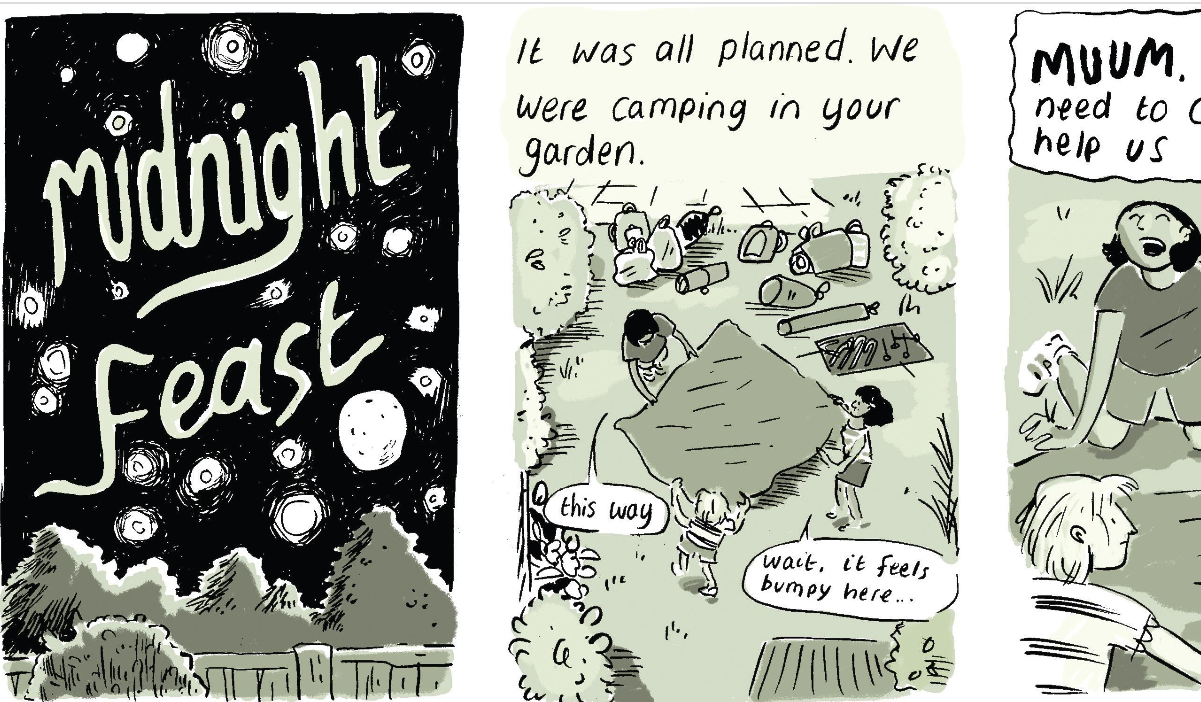 London-based Rebecca K Jones’ entry Midnight Feast, a four-page tale about young friends on the cusp of change camping out on the lawn, has been awarded the Observer/Faber Graphic Short Story Prize 2022. Runners-up for the prize were Ed Firth’s The Lift, and Michael Lightfoot’s Autumn 2014.

I was utterly stunned and thrilled to have won the this year’s Faber / Observer / Comica Graphic Short Story prize!

You can read my entry and the joint runners up too. I was so happy to see the brilliant Ed Firth @furrealist was one of them. https://t.co/KUqKSPM8FC

“I’m so thrilled to win. It’s honestly a dream come true. To have such a platform, to be published in a national newspaper. It’s the biggest break I could have. I was in a state of shock when I got the call.”

The initial idea for Midnight Feast came out of a monthly online Drink & Draw event co-run by Broken Frontier and (London’s top LCS) GOSH! Comics (they used to be held in-person pre-pandemic).

“Three guest artists choose a theme and then everyone has 30 minutes to respond to it. When I was thinking about the prize, I looked back through some of the drawings I’d done for it, and found one I’d made of two girls in a tent when the theme was ‘midnight feast’. I thought I might be able expand on that a bit.”

Expanding on the themes in the prizewinning piece:

“It’s a bit autobiographical. I did have a sleepover in someone’s garden when I was young, but while we had a perfectly normal evening compared with the characters in my story, I also remember that at 12 or 13 we had very lively imaginations: we would be convinced that coins were haunted, or that there were strange shadows in the park. The girls in Midnight Feast are like that, but they’re also developing at different rates, and experimenting with things they don’t quite understand.”

According to the article spotlighting her win, Jones works in university administration and holds two arts degrees – including an MA in illustration. She draws, self-publishes, and sells her own work at comics fairs and festivals up and down the country in whatever time she has available – including at Thought Bubble, the largest spotlight on comics across the UK. Her listed artistic influences include Tove Jansson, Posy Simmonds, Marjane Satrapi, Matthew Dooley and Emily Haworth-Booth (the latter two being former Graphic Short Story Prize winners).

Off the back of the prize, Jones aims to find a home for her graphic novel project Boomerang, about the ‘Boomerang generation’ and youth unemployment. It was previously shortlisted for the 2018 Laydeez Do Comics Prize for in-progress graphic novels. She has thus far been self-publishing the book in instalments.

“[A]lmost 200 entries” were submitted to this year’s prize. Reportedly the judges were evenly split this year on the runner up and so two were awarded – Ed Firth’s The Lift and Michael Lightfoot’s Autumn 2014.