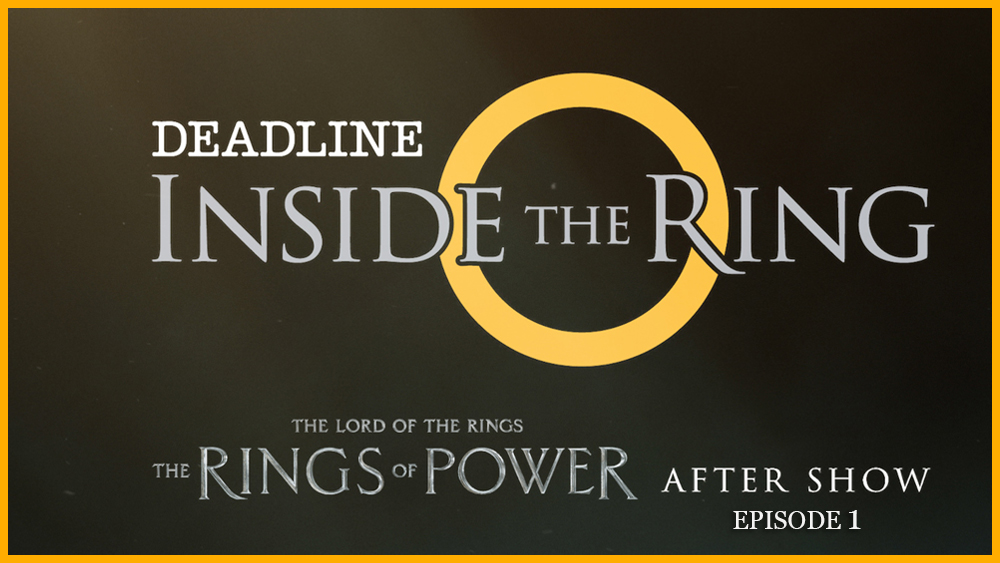 SPOILER ALERT: This video contains details & exclusive behind-the-scenes looks from the first episode of Prime Video’s The Lord of the Rings: The Rings of Power, which debuted on September 1. A new episode of Inside The Ring will drop every week of Season 1 of Rings of Power. Stick around for Episode 2 later today.

“Our ambition for this was we wanted to do a huge mega-epic and that’s what we said,” says The Lord of the Rings: The Rings of Power co-showrunner Patrick McKay of the just launched Amazon Prime Video series based on the Middle-earth works of J.R.R. Tolkien. “We wanted to do a 50 hour mega-epic,” fellow showrunner J.D. Payne adds in the inaugural episode of our new video series Deadline’s Inside the Ring: LOTR: The Rings of Power after show – as you can see in the video above.

Full of exclusive interviews, footage and insights, Deadline’s Inside the Ring will drop a new episode every week soon after a new episode of The Rings of Power.

In  fact, because the first two episodes of the much anticipated sprawling series hit the streamer on September 1, we are putting out two episodes of Deadline’s Inside the Ring today. The first episode of Deadline’s Inside the Ring features cast members Morfydd Clark (Galadriel), Robert Aramayo (Elrond), Ben Walker (Gil-Galad), Charles Edwards (Celebrimbor) and more, plus showrunners McKay and Payne, and executive producer Lindsey Weber.

“It’s so massive,” Payne says in Inside the Ring of the scope and creation of Rings of Power, which the Jeff Bezos founded streamer has picked up for five seasons. “It’s not one world, it’s a half dozen worlds in the first season alone. So, it’s all these different peoples, and cultures and history. Each of them have a distinct look, a distinct height.”

Set thousands of years before the sagas of Tolkien’s The Hobbit and The Lord of the Rings, the first episode of The Rings of Power plunges us back Middle-earth and across vast lands and seas during the peaceful time of the Second Age – or perhaps not.

Galadriel, commander of the Elves northern armies, refuses to accept that the world has healed from the centuries of war with the evil Morgoth, his disciple Sauron and the Orcs. Mourning a deep loss, the iconic LOTR character knows that the forces of evil have not be vanquished and will defying the direct order of the elven high king Gil-Galad to continue the fight. 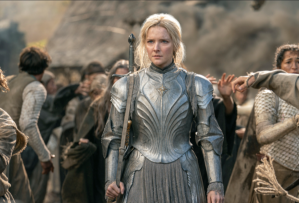 In the human stronghold of the Southlands the word of peace has arrived. After centuries overseeing the former allies of Morgoth, the watchmen elves prepare to finally return home and accept great honors. But not every human wants them to leave, and not ever elf wants to exit. Facing the cutting of their deep bond and love, Arondir (Ismael Cruz Córdova) and Bronwyn (Nazanin Boniadi) accept that they must separate. However, their separation was short lived in the first “A Shadow of the Past” episode when they discover that the evil wasn’t as dead as everyone desires. As the wandering Harfoots prepare for another migration, everything seems ordinary and peaceful. Then everything changes as a shooting star travels across Middle-earth and crashes into the ground near the Harfoots’ camp, revealing the “Stranger” (Daniel Weyman).

You know Peter Jackson’s Oscar winning trilogy, but now come and join us for the saga before the fellowship and before the forging of the great rings of power.

Sofia Behzadi contributed to this report

Players new to Overwatch 2 will have to grind 100 matches to unlock original characters
Zelda The Minish Cap – Did You Know Gaming? Feat. Remix of WeeklyTubeShow
Rare On GoldenEye 007’s Return: “We Just Kept Talking Until We Made It Happen”
TV Ratings: The Rookie Feds Opens Low, La Brea Sinks in Season 2 Debut
The World of Assassin’s Creed Valhalla: Journey to the North Reveals the Game’s Hidden Lore