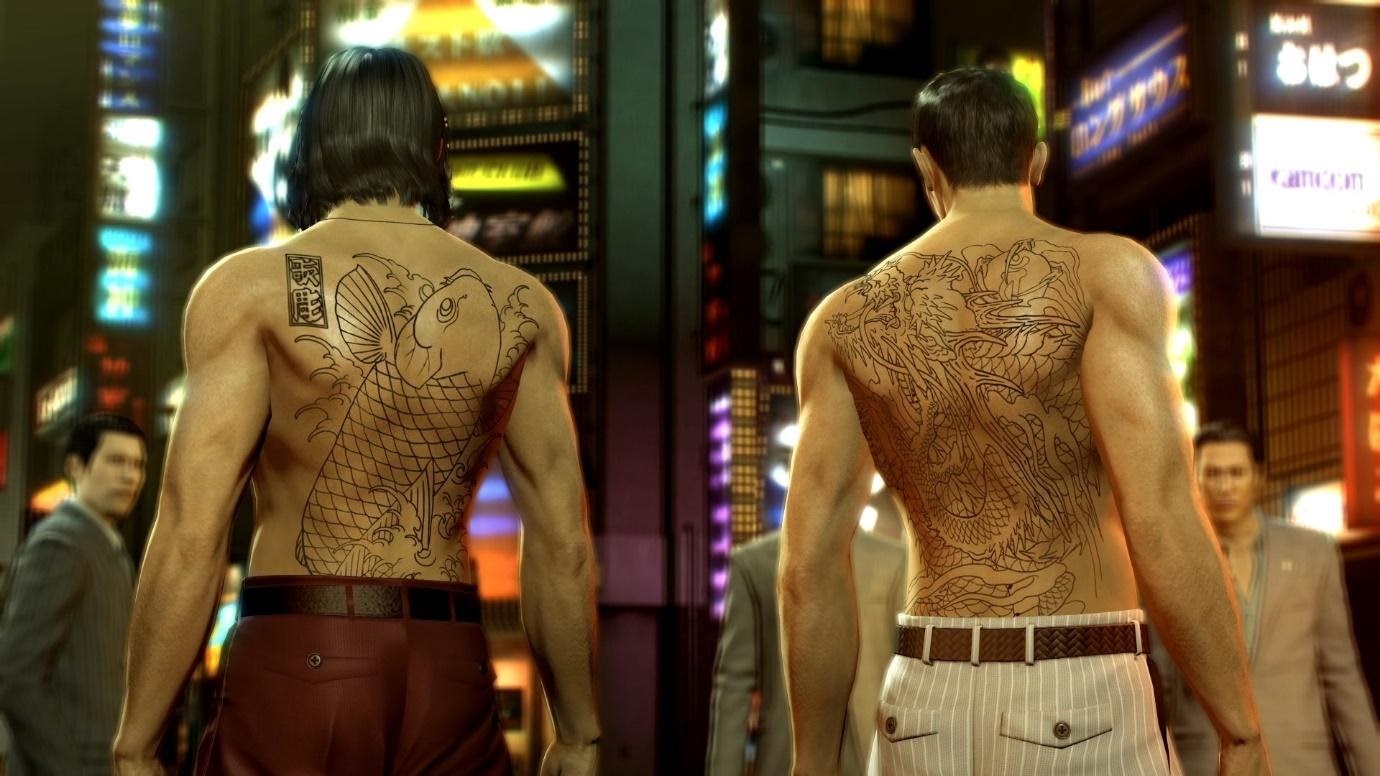 Stop me if you’ve heard this one before, but I am a big Yakuza fan. Did you read that piece where it argued every Yakuza game was a valid starting point? I wrote that. Or the one ranking all the titles in the series? That was me too. Have you read any of our Yakuza reviews on the website? You guessed it; I wrote all those.

But my love for Yakuza is relatively new. I haven’t been there from the very beginning, and my path through the series’ chronology is not what one would call cohesive. Starting with the prequel Yakuza 0, I then jumped to Yakuza 3, before returning to Kiwami and Kiwami 2 and then jumping forward again to Yakuza 6.

It can be a daunting process, jumping into a franchise that you weren’t a part of from the very beginning. That’s why, sometimes, prequel titles make great business sense. In the case of Yakuza 0, this proved revolutionary; it lit a flame in the West for the series; it had previously struggled outside of its native Japan and introduced millions more to this incredibly unique series.

I was one of those that became a fan with the release of Yakuza 0, and I haven’t looked back since. It is now my favourite game of all time; the series is currently jostling for position with Final Fantasy for my favourite franchise and I’m not ashamed to say I own four copies of this game alone.

It all started with a humble YouTube video over on PlayStation Access’s channel. Two of the presenters were discussing seven things you could do in Yakuza 0, a game I’d never even heard of. However, after watching the video – in particular the substory where Kiryu poses as a film director – I was sold. Raiding my leftover birthday and Christmas money, I headed to Argos for an immediate purchase.

By this point, Yakuza 0 had been out for almost a month in the West on PlayStation 4. Launching on 24th January 2017, this was a few years behind the Japanese release that initially came out for the PlayStation 3. The Xbox release was still a few years away after the Western boom of the franchise had really started. That came on 26th February 2020, but the wait for Xbox gamers was worth it.

In many ways, Yakuza 0 felt like a last throw of the dice for the franchise in the West, or an attempt to try something different at least. Considering how the last Western release, Yakuza 5, was only ever released digitally on our shores, it is fair to say the series wasn’t seen as a big earner outside of Japan.

A new localisation team was drafted in, led by Scott Strichart. He and the rest of the team understood that localising isn’t simply translating and instead aimed to make a very Japanese game more accessible. Primarily, the Yakuza games were designed for young Japanese men. Strichart and the rest of the localisation team opened them up to gamers of all ages over 18, and genders thanks to the excellent localisation. The Yakuza series remains a very mature game, but the barriers have been broken down that allow many more gamers to enjoy the series.

Subsequentially, the team went on to localise Yakuza Kiwami, Yakuza 6: The Song of Life, Yakuza Kiwami 2, Judgment, Yakuza: Like a Dragon and Lost Judgment. Many would agree that the series is in a real purple patch but most of that can be linked back to the initial work done of localising Yakuza 0. Lost Judgment was even the first in the series to receive a simultaneous worldwide release, something unfathomable five years ago.

Yakuza 0 tells the origin story of main series protagonist Kazuma Kiryu and everybody’s favourite supporting cast member Goro Majima. Seemingly starting off as two completely different stories, Kiryu, in the city of Kamurocho, has been accused of murder. A body has been found in a location known only as the ‘Empty Lot’, and Kiryu is being framed for the killing. Meanwhile, in Sotenbori, Majima is being forced into running a cabaret club after being kicked out of the yakuza. He is given a route back into the criminal organisation; all he needs to do is kill an innocent young woman known as Makoto.

Being a prequel, Yakuza 0 had the always treacherous task of bringing something new without ret-conning anything that came afterwards. It also gives a unique perspective depending on which way round you play the games. If Yakuza 0 was your first Yakuza title, you see the friendship between Kiryu and his adopted brother Akira Nishikiyama in a very different way to those that played the original title. Similar to Majima, those coming straight into the prequel will see a complete transformation personality wise and understand why that is. Those that had met him before will have just accepted that he is the way he is; a loveable rogue and the definition of a frenemy in the eyes of Kiryu.

As good as the story is in Yakuza 0 with plenty of twists and turns, this is just one tiny aspect of the overall game. All Yakuza games are technically open-world titles, but the map is much smaller than traditional open-worlds. Instead, the emphasis is on filling this world with as many details and things to do as possible. It sounds overwhelming, but the Yakuza games have always introduced new activities to you in a way that doesn’t bog you down. Yakuza 0 is no different.

Early on you will learn about different fighting styles that the two characters have. Throughout your time with the game, you will come across hundreds of people just looking to cause some trouble, and it will be up to you to knock them down a peg or two. These styles are taught to you by a variety of interesting characters and help set the stage for what is to come next.

Along with the main narrative, a diverse crowd of additional characters will meet with Kiryu and Majima in one of the game’s 100 substories. These self-contained narratives are all written with the same care and attention as the main story. Sometimes they can last just a few minutes; others can span over several chapters.

Then on top of these are the friendships you make across both cities. These are with yet more crazy characters, allowing you to form bonds over time by completing objectives.

I have spoken about these extensively before in the various other articles, but it was the sheer amount of all these that blew me away and convinced me that the Yakuza series is on a higher plane than other games. There is Mr. Libido, a gyrating man in just underwear who wants to see your telephone card collection, Pocket Circuit Fighter who runs the model car racing club and the Director who Kiryu poses as with varying degrees of success. I could go on, but half the fun of these substories and friendships is the completely random situation they pop up in.

You will never find yourself bored in Yakuza 0. Should you find yourself with a spare moment where you aren’t discovering the truth about the Empty Lot or beating up thugs on every corner, there are more side activities than you will ever need. Take a trip to the bowling alley, the casino, karaoke bar, underground fight club or learn a Japanese table game.

Still looking for something new. Then how about the SEGA Arcades?

Found dotted around both Kamurocho and Sotenbori, the arcades feature fully playable SEGA games. Space Harrier, Fantasy Zone and Super Hang-On are here, but the real draw is Out Run. Later games in the series have featured a few more up-to-date SEGA classics, but considering Yakuza 0 is set in 1988, these were as good as games got back in the day.

All this adds up to a hefty game, taking anywhere north of 150 hours to complete. Don’t let that put you off though, as the range of activities you will find yourself completing is nothing short of astounding. And with the game as low as £3.74 over the festive period, that is a lot of game for your money.

Sadly Yakuza 0 has recently dropped out of Xbox Game Pass but it can still be found on the Xbox Store for £14.99.

Yakuza 0 will not be for everyone. For a start, it is a subtitled game with all voice work done in Japanese. And, as much as it pains me to say it, Yakuza 0 is starting to show its age. It’s essentially a PlayStation 3 game, so we are talking two generations ago now. Graphically it is now under par, but also the sheer number of quality-of-life improvements brought into the series since then have made Yakuza 0 a bit of a slog in comparison with other more recent titles.

But for me, nothing else comes close. I will fully admit I wasn’t blown away by it at first; I was impressed but it wasn’t until around 15 hours in I realised I was onto something special here. Yakuza 0 was the gateway drug into the wider franchise that I and many others have dined out on in the years since first release. It may only be five years to some, but to others, these five years have been spent enjoying a new franchise, taking in every minute detail and being fully engrossed.

I could spend more time waxing lyrical about Yakuza 0, but I am keen to avoid retreading what I have written before. There are so many stories in and about Yakuza 0 that I have but these are elsewhere on the site. If you want to read more, click the links at the top of the article.

The future of Yakuza will hopefully be revealed soon in the form of a sequel to Yakuza: Like a Dragon, a bold new beginning for the franchise. But one as equally well received. Whatever is in store next for the series, it is going to have a difficult task of knocking Yakuza 0 off of its pedestal.