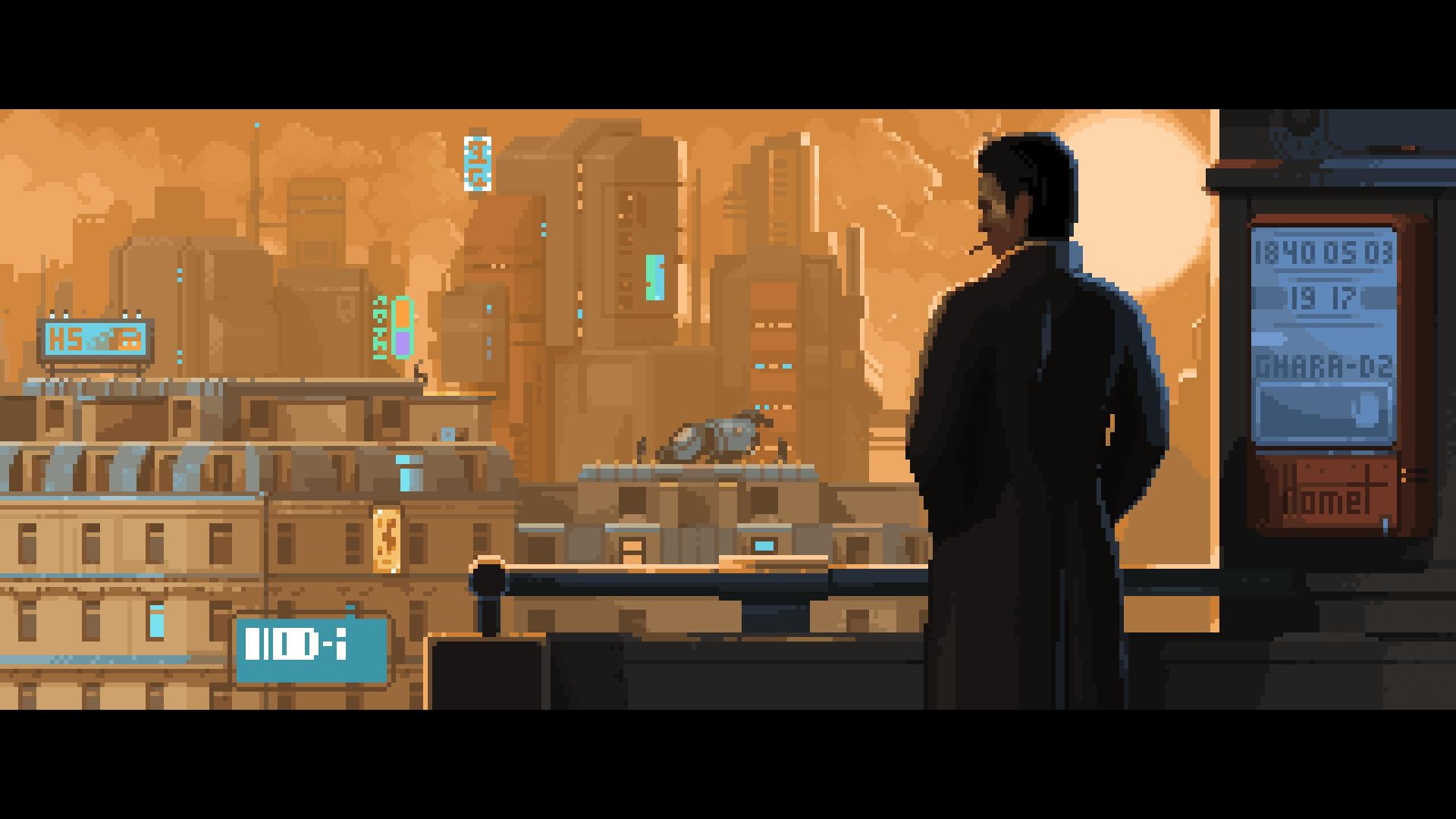 Finishing Lacuna – A Sci-Fi Noir Adventure, I felt conflicted. I’d sat in front of its final choices for far longer than I should have, trying to decide what was more important to me, before finally opting for a shade of grey. But as the consequences played out, I couldn’t help but feel a bit of chooser’s remorse: was there a better path? Was this catastrophe playing out because of me?

It’s a sign of Lacuna – A Sci-Fi Noir Adventure’s quality that I still don’t know if I made the right choice. I’ve scanned the achievements in desperation for a clue, a hint that there was a ‘good’ ending for me and the other characters, and I am none-the-wiser. But I get the feeling that there was never going to be a fairytale ending for Lacuna’s characters. Lacuna is so good at backing you into corners, that you begin to forget what fresh air and open spaces feels like.

Lacuna – A Sci-Fi Noir Adventure pulls off the Blade Runner trick of splicing detective noir and a science-fiction backdrop. The two genres love a moody central character in a trenchcoat, smoking a cigarette in the rain, and so it is with Lacuna. It tells the tale of Neil Conrad, a CDI Agent who gets drafted in to investigate the assassination of a diplomat who was in the process of brokering peace with your nation. There’s the potential for the case to boil over and cause civil unrest, so there’s pressure on you and your team.

It’s a familiar setup, unusually enough, as it’s near-identical to that of Detective Di: The Silk Rose Murders, another point-and-click adventure to be released on the Xbox in the past couple of months. Both have you solving the death of a diplomat that could spark into war, as you do what you can to push back the politics and focus on the evidence. Both have your work making unwanted incursions into your private life; neither of them give you much room to breathe; and they are both superb and should be played whenever you have time. The only difference between them is that Detective Di’s is set against a feudal China backdrop, while Lacuna nestles somewhere between The Expanse and Blade Runner.

There are a few reasons why Lacuna – A Sci-Fi Noir Adventure should move close to the top of your gaming backlog. There’s the craft, which might not come across in the screenshots. This is a rich, exquisitely constructed world, from the house-of-cards that is the tension between various societal groups, to the bustle and grime of the city that you’re looking to protect. While pixel art games are two-a-penny nowadays, this one is beautiful and dense with detail, displaying a marked difference between the haves and the have-nots. Of all Lacuna’s ingredients, it’s hard to pick a favourite between the writing, which treats the player very much as an adult human being who can understand nuance, and the music, which shifts between ambience and lilting piano with great effect. Together, it’s scaffolding for a very believable world.

Then there’s the gameplay, which strips away a lot of the point-and-click fluff to focus on the detective work. Gone are inventory management (evidence gets scanned and logged in the moment), complicated interactions, and exploration. Instead, Lacuna focuses on how you interpret information. You get an odd moment of investigation, as you use a kind of ‘detective mode’ to scan the area for clues and then investigate them, but the majority of the gameplay comes from digesting all of the information, and forming conclusions on ‘Sheets’: a kind of test to determine whether you’ve understood the information correctly.

It sounds a bit dry and daunting, and it occasionally strays into that territory. But, most of the time, you are cross-referencing people’s alibis with evidence like time-sheets and ledgers, and there’s a special kind of thrill to finding out that – aha! – the witness is lying and the evidence does not corroborate their story. So, you enter that mismatch into your ‘Sheet’, submit it (a decision which never feels anything less than tense) and have Lacuna check your homework. These ‘spot the error’ puzzles are superbly constructed, and make you feel like a true detective. It’s very rare that Lacuna’s logic will feel like a leap, or a detail is obscured too much.

And finally, there’s the choice-making, which Lacuna – A Sci-Fi Noir Adventure relishes. We approached a critical point in the story, and found ourselves hoping that it wouldn’t ask us to make a choice. We’d be begging for a cutscene to take control away from us, simply because there didn’t seem to be a single easy choice to make. But no. Every time, it would turn to us and ask us to determine which puppy to kill. It’s emotional torture every step of the way.

Are there criticisms? A few, but none of them tarnish the experience. There’s the lack of meaningful gameplay beyond the sheet-filling, which won’t be for everyone. It’s nowhere more stark than in the game’s big action moments: you never get to participate, and – in one frustrating moment – you are locked in a surveillance truck and don’t even get to watch a narrative-shifting arrest. Lacuna has a habit of taking away the game pad whenever something exciting happens, and it is an annoying one. We’d have also taken a better method of replaying the game – it absolutely invites multiple playthroughs – but there’s not even a satisfying ‘skip dialogue’ button, let alone a chapter select.

But we don’t really care. Lacuna – A Sci-Fi Noir Adventure jettisons a lot of point-and-click complications to focus on its story, its setting and the opportunity to be a hard-boiled detective. It has a knack for creating situations where you can ‘gotcha’ a lying witness, confronting them with the evidence that catches them in their lie. And it has another knack for presenting you with an impossible choice and watching you squirm.

For a few hours, Lacuna – A Sci-Fi Noir Adventure let us walk in the shoes of a Deckard or Bogart, looking mournful as we smoked a cigarette in the rain, and we’d gladly take the opportunity again.