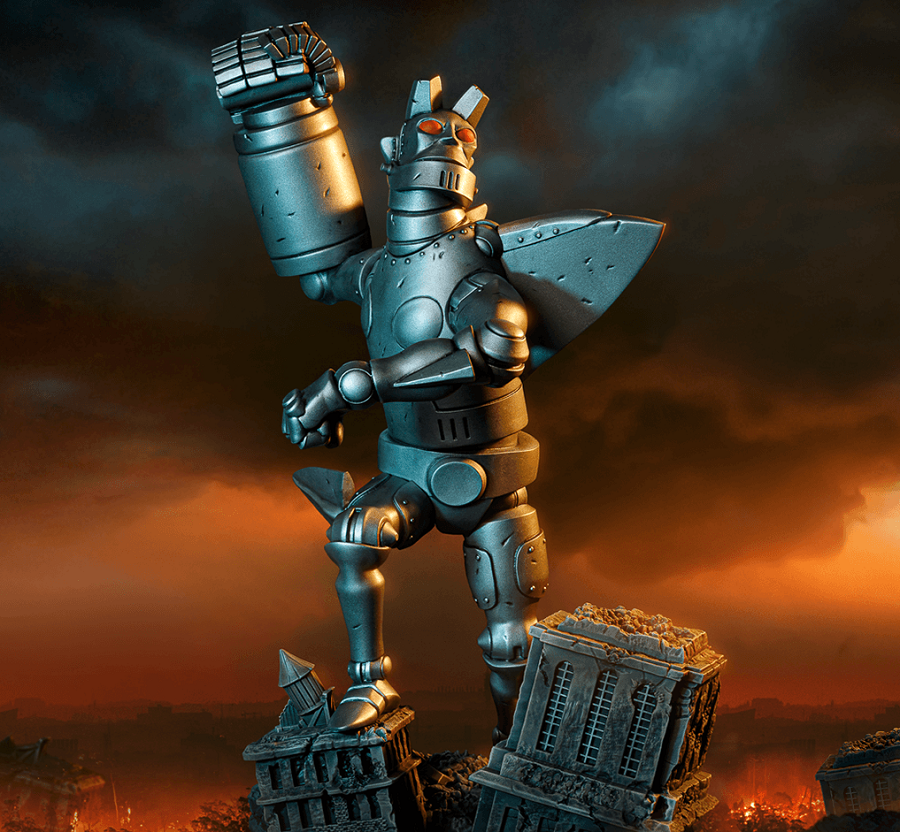 § Nice Statue: Giant Robot Hellboy Statue. It’s fun to say! The statue was designed by Mike Mignola, made by Dark Horse and there will be only 500 of them. Almost as good as an NFT!

WE’RE HIRING! @TitanBooks are looking for a Fiction Editor! This is a commissioning role, meaning you get to publish books. You read them, you fall in love with them, you buy them and you get them made. Straight up the keys to the kingdom.

§ Area men happy with television series based on their work: the local paper catches up with Brian Michael Bendis and David F. Walker on the CW’s new Naomi series, and they like it!

Speaking from their Portland homes in a recent joint interview, both Bendis and Walker say they feel lucky that DuVernay responded to “Naomi,” and that they’re happy with The CW series. “Ava knows what she’s doing,” says Walker, adding that both he and Bendis took a hands-off approach to the TV adaptation, which makes some changes to the story told in the first series of comics.

§ Graeme McMillan is newslettering! This is awesome news because we always need more Graeme McMillan. You can subscribe to Comics, FYI right here.   The most recent issue delves into a surprise simultaneous digital and print release for the latest Wolverine comic;

Wednesday brought the surprise announcement that Marvel was simultaneously releasing the first issue of new X-Men event series X Lives of Wolverine* on Marvel Unlimited alongside its release in comic stores, in what was being called a “special bonus release” of the issue. Traditionally, the MU subscription service uploads issues three months after their in-store date, although there have been occasions when issues appear earlier than anticipated; the first four issues of Donny Cates’ Thor run were added before the in-store release of the fifth in summer 2020, for example. (That’s saying nothing of accidental uploads of material ahead of in-store releases, as has happened more than once.) This “bonus” addition of the debut of X Lives of Wolverine’s premiere issue marks something new for Marvel, however – and something that might end up being a problem if it’s a trick repeated too often.

§ You can’t keep a little blue guy down. The Smurfs have a new home for licensed books: HarperCollins. The new program kicks off in April with How Much Farther, Papa Smurf? a question we’ve all asked many times. The new program will tie in with the most recent animated Smurf series, but also Peyo’s comics classics.

The publishing effort will take its cues from the entire world of the Smurfs, including the original comics created by Peyo, refreshed versions of previously published titles, TV tie-ins, and wholly new concepts. It is likely to appeal to a wide age range, from preschool up through adults, Thomas said. The focus initially will be on core formats such as board books, I Can Read! titles, 5 Minute Storybook Collections, and, for TV tie-ins, mass market formats such as 8x8s with stickers and special effects. Further down the line, unique novelty and gift formats will be added. Harper does not hold rights to the coloring and activity book or most comic book categories, but it will be publishing some titles in its new I Can Read! Comics series. The plan is to publish one to two Smurfs titles per season.

§ Over at Image, they are ramping up a whole now SF universe with Radiant Black, and Polygon has a preview, timeslines, you name it. The series was created by Kyle Higggins, along with editor/designer Michael Busuttil, artist Marcelo Costa, and letterer Becca Carey, and it’s just getting started.

Higgins and his team drew from their love for relatable everyman heroes like Spider-Man, while trying to update it for the 2020s, and a generation disillusioned by lies of a hollow future. Aesthetically, it would draw upon their collective love of Tokusatsu-heroes like Ultraman, Kamen Rider, and Super Sentai, building on the Power Rangers and Ultraman comics work Higgins had already done for BOOM! and Marvel. It would go onto become a smash-hit commercial success. Having made its debut in early 2021, this February sees the title completing a full year of publishing. But the creatives behind this are just getting started. The second year of Radiant Black looks even bigger and better than the last, and more importantly, Higgins and Image have plans to expand beyond the keystone title.

§ Meanwhile, you can also catch up with Tom Peyer’s The Wrong Earth series, courtesy of Cultured Vultures. Ahoy’s flagship title has a complicated pubishing history.

AHOY Comics launched their first wave of comic titles back in 2018. The Wrong Earth (2018-) and High Heaven (2018-2019) were the debut comic entries from the publisher. Initially, The Wrong Earth began as a limited miniseries. The comic tells a meta-story about two superheroes from parallel universes who become trapped in each other’s worlds. With one Earth saturated with campy dialogue and cotton-candy colours and the other a grim metropolis where blood runs down the noir-tinged streets, Dragonflyman and Dragonfly fight to escape their wrong Earths. After several iterations including a sequel series, a prequel series, and an upcoming one-shot crossover event series, readers who want to break through the mirror and enter The Wrong Earth comic universe may find themselves in need of guidance.

GEORGE: We really wanted for both settings of the story to contrast a lot, because there’s such a big tonal shift in the book once we leave Texas. We needed a false sense of security from the mundane life in the suburbs, so I kept some small futuristic designs here and there but nothing that would take the reader out of the slice-of-life aspect of that part. I was definitely a bit afraid of having those early parts looking too boring. But I also knew that the script was good enough to hold readers’ attention until things blew off, so I focused way more on character acting, and I think it was the right decision.

“It was so much fun,” Raimi said. “I love ‘No Way Home’ and the audience I was with went crazy. It was delightful to watch Alfred play his role, and Willem Dafoe, just seeing these guys take it to the next level. And Tobey was awesome as always. The best word I can say is it was refreshing for me.”

Refreshing indeed; departing in gloom after the mucked-up Spider-Man 3, Raimi deserves all the joy in seeing his beloved supervillains introduced into the shiny MCU. But how will Raimi fare under the MCU’s by all accounts auteur unfriendly production methods for Doctor Strange in the Multiverse of Madness?

“Marvel’s been a great team to work with,” Raimi continued. “I think that was a not-surprising surprise. I’ve been super-supported by the whole Marvel operations, starting at the top with Kevin Feige, and working all the way down to the crews that they work with. [They’re] super professional and have supported me every step of the way.”

Spoken like a trooper. He also noted that DSITMOM maybe have reshoots if tests reveal weak spots. “One thing I know about the Marvel team is they won’t stop. They’ll keep pushing it until it’s as close to being great as it could.”

Indeed. Spider-Man No Way Home is now the FOURTH BIGGEST grossing domestic film of all times.

§ It looks like another Millarworld series is going into production: ‘American Jesus’ is starting up in March under show runners Everardo Gout and Leopoldo Gout. Surely there will be no controversy over this?

First announced among the initial 2018 roster of shows and movies, production is currently eying to start in March 2022 as we can exclusively reveal. First released in 2004 under the name of Chosen, the comic book series was amongst the first batch of titles from Millarworld. It was later re-released as American Jesus and 3 issues were released in total. A follow-up comic series was released between 2019 and 2020 called American Jesus: The New Messiah with 3 issues released in total.

Nurse Ratched Actress Louise Fletcher Dies In Her Sleep In France
Negan’s Barbed Wire Bat ‘Lucille’ From The Walking Dead Hits Auction Block
The Resident Round Table: Should We Call Time of Death on the Series?
UK charts: Splatoon 3 No.1 & The DioField Chronicle enters at No.17
Christian Bale Confirms He Had To Tell Chris Rock They Couldn’t Hang Out On Amsterdam’s Set, But There’s A Good Reason