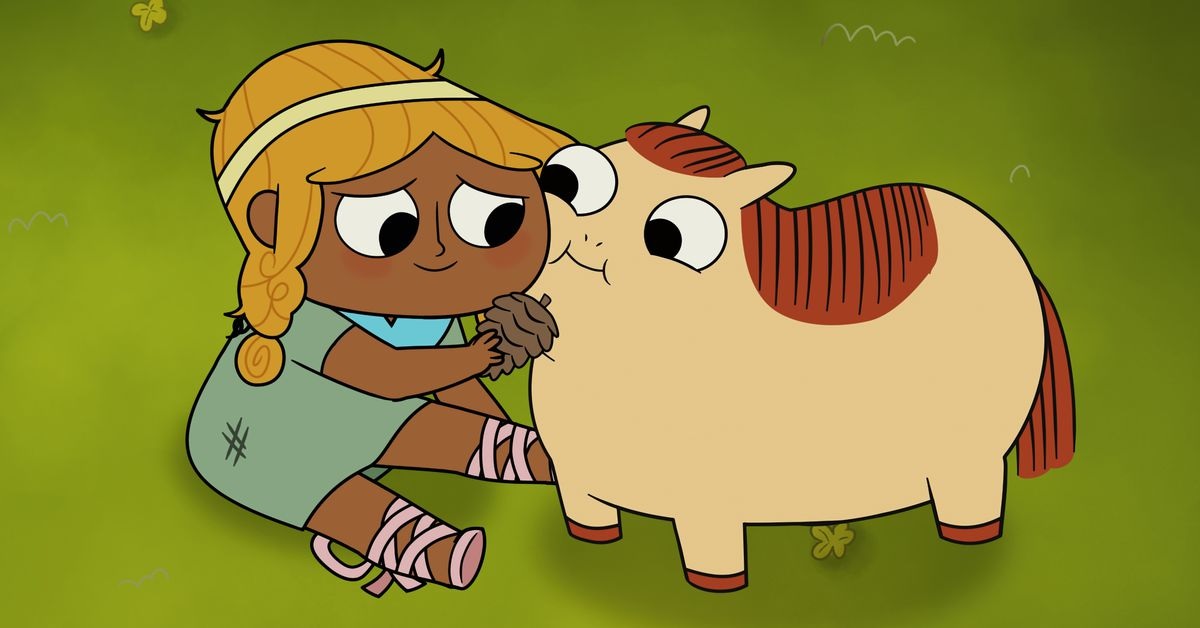 Kate Beaton’s fat pony is coming to Apple+ in just a few weeks!

If you’re a fan of Beaton‘s comics and art, specifically Hark! A Vagrant, you’re probably already well aware of the reoccurring fat Shetland pony character. The popularity of the pony inspired merchandise and even even enjoyed a cameo in “The Eyes,” a season two episode of Adventure Time. Back in 2015, Beaton this “roly-poly pony” was the featured character in the children’s picture book The Princess and the Pony published through Scholastic. So it won’t come as any surprise that Apple TV+ has adapted the book into an animated series called Pinecone & Pony which is set to debut on the streaming platform next month.

The original book followed Princess Pinecone and her desire for a strong warhorse for her birthday, but instead receives gets a very cute pony to her chagrin. Unhappy at first since she can’t teach it to fight in battle. Nevertheless, Pinecone enters it in a tournament where the other warriors are won over by the pony’s cute antics.

The eight-episode series follows the same premise about “a young girl named Pinecone who, with the help of her best friend Pony, is learning that there’s more than one way to be a warrior.”

“Together they’ll show their world how to challenge expectations, and that life can be a fun-filled adventure if you let it,” Apple wrote of the series.

The series is being produced by DreamWorks Animation and First Generation Films. Showrunner Stephanie Kaliner serves as executive producer alongside Beaton, Christina Piovesan, and Mackenzie Lush.

In addition, Taneka Stotts whose past animation credits include Steven Universe and Craig of the Craig serves as story editor as revealed by Twitter.

It is with great honor that I get to say…

✨I am the Story Editor on Pinecone And Pony✨

Thank you @beatonna for creating “The Princess and the Pony” it helped remind me, I’ve been a warrior all along.💋#PineconeAndPony premieres April 8 on Apple TV+ https://t.co/gZTzqsgvCf pic.twitter.com/YZBwWimk5b