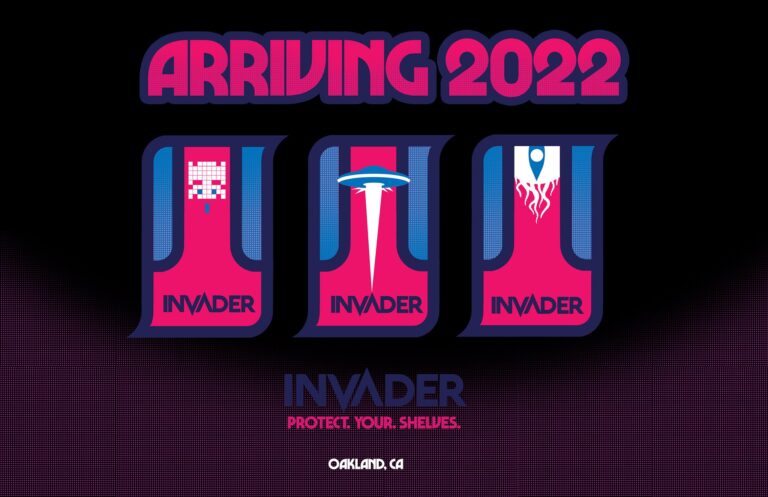 As all the disruption in the comics industry distribution system has taken place, it’s affected the biggest companies – but also the smaller ones. For instance, Invader Comics, a new indie publisher is evolving out of 215 Ink to take advantage of the many new distribution channels available.

215 Ink (named after the Philadelphia area code) has been around for a while, putting out a slate of titles like The Kitchen Witch by Steve Orlando and Olivia Palaez. 215 ink also served as a lab for projects which have moved on to larger publishers. For instance Flutter, an acclaimed series about a teen shapeshifter, started at 215 Ink before getting collected at Dark Horse and now has a TV deal in place. Jesus Hates Zombies has been in development as a film with Eric Balfour. Among the creators they’ve worked with in the past (and some currently) include Orlando, Shawn Aldridge, Micah Myers, Tony Gregori, Jeremy Holt, Jim Starlin, and logo designer Tim Daniel.

But now the company is rebranding as Invader Comics according to partner Michael D. Perkins. There are several reasons – for one, it’s no longer located in Philadelphia.

For another, the comics economy has shifted, he says. “With shops closing all over the place, we knew we needed to rebrand and relaunch with a new model that would put the readers FIRST. We want to make sure we’re giving readers a reason to buy our books – so we’ve landed on a new model that runs a Kickstarter campaign with exclusive covers and content with every book. We’re moving beyond 100% creator-owned to come out with some of our own IP. We’re aiming for bookstores and libraries and media landscapes beyond the comic tradition.”

He told us more about the reasoning behind the rebrand: “Well, I started out as just a creator (both my own books and contributing to anthologies, including the NYT best-selling series FUBAR) and joined the 215 Ink team when I sold them the book I did with my brother Will Perkins, “Beware …”. (Will has gone on to Dark Horse with “Gregory Suicide” and most recently “Goblin”, both of which he did with Eric Grissom.) Eventually I started doing editing for the books, became the editor in chief, and then a co-owner of the company.

“A few years ago, the original owner walked away due to personal reasons, leaving me in charge. Currently the company is run by myself and my two other managing partners, Keith Foster and Kevin Miller. I met Keith at NYCC when I saw him boothing for his book “Kodoja” which I brought into the 215 Ink fold and he eventually started helping out with production and planning. Kevin I worked with in my day job when we both were involved with a rebrand for the Philo streaming service. He’s a top-notch creative director (and comic creator) who was involved with the rebrand of Comedy Central and the Discovery Channel.”

The name Invader is inspired by their plan to “invade as many mediums and platforms as we can find. We want our arms (tentacles) to reach far and wide, to make sure we’re making a connection with as many readers as possible.”

Small presses like 215 Ink often marketed their books directly to readers at comics events – and Perkins says the lack of live events over the last two years was part of the thinking behind the rebrand. “We can’t wait to get back to shows. We’ve done a few in the last year – most recently Emerald City – but it’s certainly been tough not being able to get out there and see as many people face to face. But rest assured, we’ll have lots to show off when we return!”

For now, Invader is launching with the first issue of the second volume of Freaks & Gods which is in Previews right now, and the Kickstarter for issue #1 this week. “Other than that, we have a full production schedule blocked out with books planned well into 2023,” says Perkins.

Perkins supplied some artwork of upcoming projects and also a manifesto mixed with some old fashioned hype:

Close your windows. Lock your doors. We’re coming for you. We’re invading the spaces we have no business being, knocking down the barriers that have kept you separated from the stories you NEED TO READ! Don’t try to run. Don’t try to hide. We’re everywhere, and we’ll find you.

We’ve amassed an army of hundreds of creatives from all over the world. We’re likely already in your hometown, and soon we’ll be invading your bookshelves. We’re going beyond traditional models, and we’re done relying on comic shops and Diamond. No matter where you look, you’ll find us. Kickstarter? Yup. Digital? You got it. TV? Movies? It’s coming … Want to buy direct from us? You can do that too.

This is an invasion from top to bottom. You’re going to find stories from the hidden talent that was right under your nose. Stories from the big names that are sick of having other people take ownership of their intellectual property. And our own original stories like you’ve never seen before. We’re pushing the limits of the medium in content and context, challenging you to see something from a new perspective.

We’ve spent years combing the creative fields to find the talent that the mainstream outlets ignored and beam them up to our brand. Our legacy of accuracy elevating talent to new heights can’t be denied. And when the big names had personal stories they wanted to tell, they came to us too. Our tentacles reach everywhere. Soon they’ll reach you, too.

We care about comics. We care about putting out quality books, and that goes for the narrative, the art, the production, and the print itself. We’re not cutting corners with the things we love, and every single book we put out will be something you’ll be proud to display on your shelf or see in your digital library. We’re not looking to add to the never-ending pile of mediocre content we see out there. If it’s not special, we won’t put our name on it.

PC Gamers Are Warming Up to Windows 11, Steam Survey Reveals
Netflix Unveils Upcoming Arab Films & Series Including Telfaz11 Feature ‘Alkhallat’, Docu-Soap ‘Dubai Bling’
The newly revamped Xbox Games With Gold scheme disappoints for October 2022
Comics Crowdfunding Round-Up: FAIRYTALES FROM MARS, RITUALS OF A COMMON KIND, and 3 more campaigns we love!
Overwatch 2 tier lists are a mess, but most agree that one hero is coming out on top