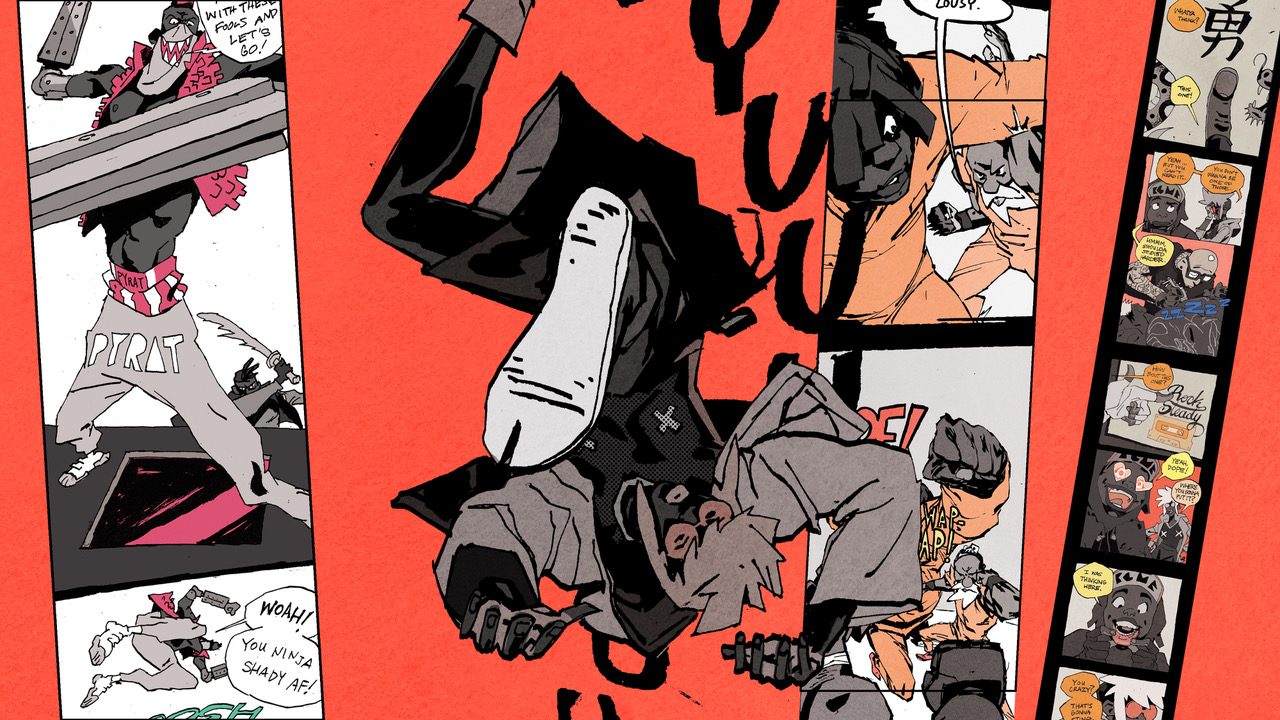 Ronald Wimberly will say something crushingly pessimistic and laugh it off in the same breath. We’re supposed to be talking about how his outer borough samurai swords comic, GratNin– that’s Gratuitous Ninja, of course- is being collected in print, but the conversation keeps drifting to stuff. Film, comics, design, ask him a philosophical question and he’ll give you a very specific answer that changes how the question felt. Wimberly is vocal about the things he loves, what he draws from them, and more, the movements they are a part of, the concepts they are born from. You just have to listen.

Today Beehive Books launches its Kickstarter campaign to fund the GratNin Deluxe Box Set. How does a boutique publisher capture an “endless scroll” comic where bad times in the Gowanus canal lead to the hardest practitioners of martial arts throwing off their hippie robes and throwing down against corruption (and pirates)? A graphic novel, but with one single page, sort of, one that’s four hundred feet long and folded accordion-style into six hundred parts. A wall sized subway map of New York’s ninja secrets, handful of cards, a variety of production levels that top off with “an edition of 26… hand-lettered from A-Z” which, how do you not love that phrasing. Here’s what they have to say about Gratuitous Ninja:

The Namba Family are masters of the deadly KyokuGen Muron Ryu (KGMR) craft, but in the police and pirate-riddled streets of Brooklyn, it’s always been best to keep those powers under wraps… But what good is being a ninja if you can’t protect your hood?

Welcome the Namba clan’s three newest recruits: Mo Brown, a weed dealer; 9ONE, an anarchist vandal; and Kibo Evars, the fastest blade and most deadly DoorDasher in all of Brooklyn. These three decide to secretly use their ninja skills to fight crime. And that’s where their trouble begins.

“GratNin has a unique dynamism that thwarts traditional publishing,” said Publisher and Editor-in-Chief Josh O’Neill. “So we’ve done what our team at Beehive does best: reimagine what a book can be. [An] accordion-folded concertina wrapping up the urban sprawl of NYC into a manifold paper world.”

Wimberly and I spoke briefly about influence and ardor in relation to GratNin and his Romeo and Juliet bushido remix Prince of Cats, and the man drops lists that will keep you occupied looking up awesome for hours after you’ve donated to the Kickstarter.

Arpad Okay: The GratNin junket talks about hippie ninjas rising up from their neighborhood community center, which got me thinking about the period piece sword story (as opposed to science fiction) being masked modern critique. A legend of chivalry like Zatoichi or Lady Snowblood about someone without status (vagabond! bandit!) defending the innocent from the wrath of knights and kings, is a contradiction of roles, but one that makes sense in the context of storytellers reacting to what they saw in postwar Japan, or wuxia made in Occupied China. Am I reading you like King Hu? Eastern Depot pissing off the wrong monks? What do you think it is about old tales of bushido and blade that suits stories of modern resistance so well?

Ronald Wimberly: I think I just like the cuts, to be honest. The clothes, the shots, the choreography.

I never got into wuxia. I love Ashes of Time. I liked The One Armed Swordsman joints. I just saw Dragon Inn recently. It was fun. I watched it right before watching Goodbye Dragon Inn. I didn’t like Lady Snowblood. But I did like Female Yakuza Tales. I wouldn’t describe Lady Snowblood or Zatoichi as having anything to do with chivalry though. Would you?

Okay: Maybe Love Song of Vengeance is a little more on the nose than the first one, but yeah 100% chivalry. Postmodern chivalry, where the head of state is an ignominious monster and those who would avenge or defend the innocent are exiled criminals. Just wrote about it in relation to Cyril Pedrosa’s new series.

Wimberly: I’ve watched a lot of jidaigeki, but I’m not into heroic samurai tales. Some of my favorites are critiques of chivalry and heroism, where chivalrous figures are tragic, demoralized, or even villains. One of my favorite chanbara is Zatoichi. He’s not a samurai. He’s an anma, a blind masseur, who hustles yakuza who try to take advantage of his inability to see. Zato does good reluctantly, and has his humanity beaten out of him every episode. [Laughs] Another one I love is Yamada Yoji’s Twilight Samurai.

Prince of Cats was definitely one of these types of stories. Tybalt is tragic. The Ninja in GratNin are similarly confused for most of the story. They get set straight though, with the help of their elders.

Okay: GratNin’s scroll style format seems opportune for experimentation in the potential size and shape of story beats. The editing techniques of classic martial arts films were super reliant on cutting as well, to make power hits and impossible acrobatics visually harmonious but also rip. Were you thinking about any of that when you were navigating how to place the breaks in the strip— did you have any control of how the folds landed when you were putting together the forthcoming print edition?

Wimberly: Unlike Prince of Cats, I wasn’t thinking too much about films when I worked on GratNin. I’m sure I’ve internalized them so much after watching them. I probably was still watching them as I worked on the comic. I was mostly just thinking about the specifics of the form and how I could use it. The same amount of care goes into the print edition. That care also extends to the packaging. Chloe Scheffe, my partner on design, and I have spent a lot of time thinking of how the storytelling experience starts at the presentation of the package and continues past the last frame of the comic.

Okay: The way you’ve talked about this strip is like its paramount reader is you: I read that it sprung from a conversation born of and tied to your earlier work, Prince of Cats, but I was struck by just how many times you referred to your choices as being self-indulgent. Do you feel like what you’re doing on GratNin isn’t how you’d normally tell a story? I’m curious about the standard you’re measuring against.

Wimberly: I feel like we’re usually our own primary reader, no? I can’t say I’ve ever thought about any of this. GratNin as a concept predates Prince of Cats. Prince of Cats is a GratNin story in the sense that it’s got Gratuitous Ninja in it. That part is kind of indulgent on my part. The aesthetic choices were very personal. I don’t really measure myself against a standard …maybe Shirato Sanpei’s drawings. Ninja Bugeichō. Naruto. Manga stuff. Maybe José Muñoz. THB. [Shrugs]

I remember thinking that certain episodes of Samurai Champloo were for me and about a dozen other people who had seen the Hanzo the Razor trilogy, read The Philosophy of Andy Warhol, knew how to give the Gas Face, and also knew the significance of the kurofune.

Okay: GratNin is a comic that has broken from the mainstream format for an avant-garde layout, but its form imposes other, even more inflexible restrictions on the content. Gesture studies are as much the foundation for realism as figure drawings, right? But anatomical accuracy is seen as sophistication, and expressive artwork like that in GratNin is breaking the rules of how serious is supposed to look. Do you think there are any actual universal rules for making good comics? What do you try to avoid?

Wimberly: [Laughs] At this point we can’t say there’s evidence of universal rules anywhere in our universe?

I do have a very strict way of thinking about comics- that I try not to impose on others. I’m mostly interested in how cartoonists approach the medium where even the writing is a type of drawing. Comics as a type of synthesis. Like I’d call Hollywood Africans or Captain Underpants a comic before I’d call a lot of projects where a writer who can’t or won’t draw gets an illustrator to illuminate a script that frankly can’t stand on its own one. That said, there are some great examples to the contrary. Even a handful of my favorite cartoonists have worked with writers.

Okay: Okay now I am going to confess self indulgence. Bringing it back to breaking into the Pharaoh’s Den grocery store and finding out Sun Ra’s Arkestra really is from space, can you say anything about the influence of music on GratNin? When you’re thinking about it, when you’re working on it, what’s playing?

Wimberly: I can’t say music directly influences the production of GratNin much because I don’t even ever listen to music until I’m inking… sometimes. Music can change my rhythm and mood. That said, the first song that comes to mind when I think of GratNin is “Slug Named God” by Melt-Banana and Otomo Yoshihide. If I had to make a mixtape it’d probably be a bunch of Flatbush Zombies, Young Fathers, Yasuaki Shimizu’s Kakashi, Show Me the Body, Otoboke Beaver, Velvet Underground, Suicide, Death Grips, Yaeji, Boot Camp Clique, A$AP Mob, DOOM/Vic Vaughn/Geedorah, and Wu of course.

To support the GratNin Deluxe Box Set, visit their Kickstarter. Also check out LAAB, the sequential arts and culture broadsheet that Wimberly puts out with Beehive Books.