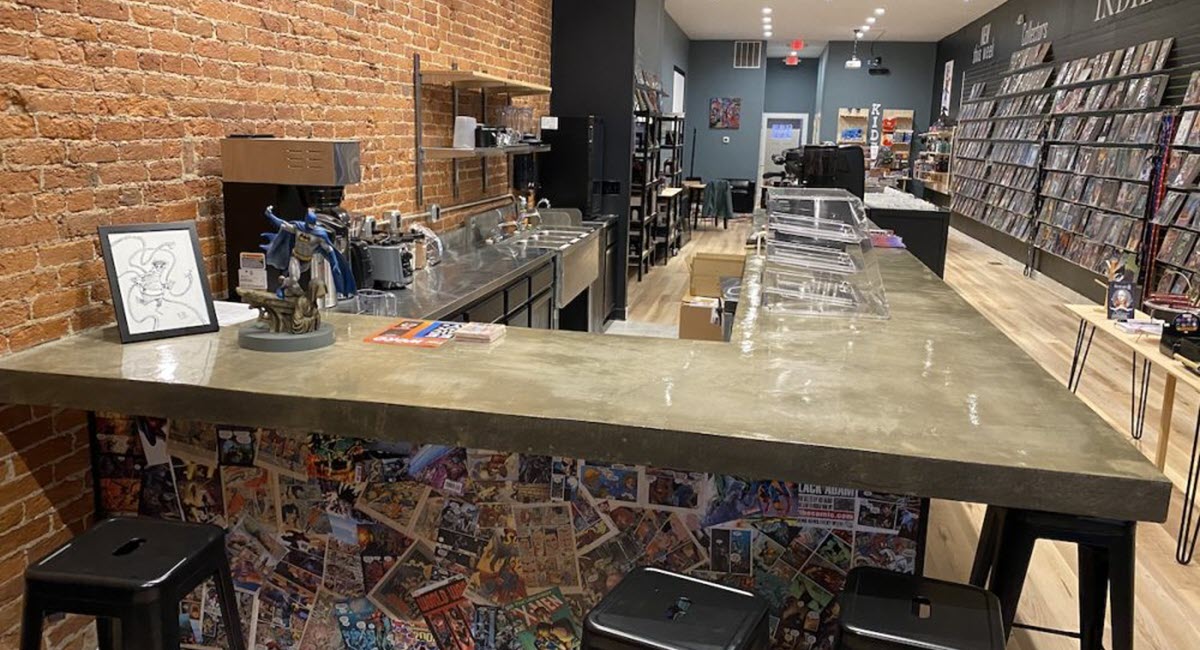 It’s always exciting when a new comic shop opens its doors, and particularly so when it’s a shop that’s more than your average comic store. Monocle Comics & Coffee looks to be one of those places. A combination comics and coffee shop, Monocle is set to open its doors at the end of this week in downtown Miamisburg, Ohio, south of Dayton. The Dayton area is one that’s always had its fair share of comic shops, but Monocle will be the first to set up shop in Miamisburg in decades, and the first ever to be located in the newly-revitalized downtown area. The Beat sat down with Monocle Comics & Coffee co-owner Adam Remillard to discuss the inspiration behind the new shop, navigating distribution issues and a pandemic, and more.

Joe Grunenwald: Congratulations on opening the shop. How long has opening a comic shop been something you’ve been interested in doing?

Adam Remillard: I’ve always loved comics, I’ve always loved going into comic book shops. My career up until now has been in the cybersecurity world. I’ve been fortunate enough for that career to give us the opportunity to pursue this. So it really wasn’t until within the last four or five years where my wife and I really started thinking about starting our own shop. But it’s always kind of been a dream, but never something that I really thought would actually come to fruition until, you know, just more recently. So yeah, I think it’s probably within the last four or five years that we really thought, you know, we could actually do this.

Grunenwald: And your wife is into comics, too?

Remillard: She is. She’s not as into comics as I am, I think, but I usually kind of push them over to her every once in a while to have a read on and she always like them. She’s really into the the movies, and she’s kind of a nerd, too, like I am, so she doesn’t have any objections to the comic book shop. She definitely has her focus on the coffee side of the house. I’ve been doing a lot of the comic stuff, she’s been focusing on the coffee side, and so it’s been kind of a good tandem.

Grunenwald: What appeals to you about running your own shop?

Remillard: So, I’m still doing the cybersecurity thing, so this is really a passion project for us, kind of a labor of love sort of thing. So it’s not something where we really need the income to survive. But it’s something where, we want to build a place where people want to come, they want to hang out, they want to be in the shop. So yeah, that’s kind of the motivator for us, rather than, you know, the financial side of the house.

Grunenwald: You mentioned a little bit when we were talking earlier, but how has the pandemic impacted Monocle Comics & Coffee’s plans?

Remillard: It’s been rough. When we first purchased the building, we were hoping we would be open a lot sooner than this. I think originally, we wanted to be open in 2020 – we actually bought the building towards the end of February [2020], and then the pandemic hit in March, so everything shut down. You know, we had contractors in here working on the building, but the supply chains and everything being closed down really put a lot of delays into it. So here we are, two years later, and we’re finally opening. It’s been a hard road, but it’s been like that for everybody. We can’t complain too much because we did finally get to, we’re able to open. I don’t know, maybe we were fortunate because we weren’t open when the pandemic hit and we weren’t forced to close down, forced to lose a lot of revenue. Trying to look at it as glass half-full.

Grunenwald: What’s your personal history with comics? It sounds like you’ve been reading for a while.

Remillard: Yeah, absolutely. When I was little, I would always read comics. I was super into the X-Men. Wolverine was awesome when I was younger. What kid doesn’t like Wolverine. Grunenwald: Absolutely. We’re around the same age, so I imagine you grew up with the animated series.

Remillard: Yeah, absolutely. But I would say I didn’t get serious into collecting until I got out of college and had some more disposable income. That’s when I really started getting into it. I think more recently, aside from you know, the mainstream stuff – Spider-Man’s my guy now – but I’ve been really into a lot of the indie comics coming out specifically a lot of stuff from Boom, like Something is Killing the Children, Seven Secrets, that stuff has been just phenomenal. So I’ve been kind of tearing through a lot of that stuff.

Grunenwald: Which distributors are you using? And how has that experience been as a new shop?

One of the big issues I’ve been struggling with, as a first-time shop owner, is really how much of each title to order before we open up, because we don’t have the pull list established yet, or the regular customer base established. So just understanding that inventory, and what folks are into right now has been a lot of research, a lot of digging, a lot of talking to people. So that’s kind of how things have gone up until now. And hopefully, as we get a little bit more established, obviously, we’ll start to kind of hit our stride and that piece will become a lot easier. Grunenwald: The store has a lot of single issues in it, and a relatively small graphic novels section. Is that something you’re planning to build out?

Remillard: Oh, yes, absolutely. I would love to double or triple both the graphic novels plus the the manga section. I’m actually really big into manga, and my kids are really big in manga and anime, too. It’s funny, my son, he’s 12, he tears through the manga. Anything in that world, he knows, understands, understands what’s popular. So I’ve been picking his brain about what to order. And, you know, what’s popular right now? What should we get this week from Diamond?

Grunenwald: That’s a great resource to have.

Remillard: It’s been helpful. But yeah, absolutely. I would love to build those sections out more, as we continue to build our inventory.

Grunenwald: Yeah, I mean, just with the way that the market has been going, it seems like reading trends are more towards trades and things like that.

Remillard: Yeah. And, you know, I’ll say aside from a lot of the conventions and things where the distributors will come and sell stuff for a little bit of a discount, it’s harder to find some of the the newer stuff outside of Diamond and Lunar, at least from what I’ve found.

Grunenwald: Have you looked into Penguin Random House at all?

Remillard: A little bit. We haven’t established our accounts through them yet. But yeah, it’s on the ‘to do’ list.

Grunenwald: Say I’m a person who walks in off the street, never read a comic before. What do you suggest that I read?

Remillard: So first, I would probably ask what your interests are. So like I was saying with indie comics, for me personally, that’s what I’ve been really, really into. Something is Killing the Children is more like the horror aspects, so if that’s something you’re into, I’d obviously recommend that. But it’s also more adult. It would be less appropriate for younger readers. So yeah, I would probably point to some of the indie stuff. Most of the BOOM! Studios [books], like I was saying, I think are just fantastic right now. If you’re more into the mainstream, like DC & Marvel, you can’t go wrong with Batman. Obviously, everybody loves Batman. And I’ve actually loved Donny Cates’s Thor, his run on Thor lately I think has been just great. That’s probably the pitch that I would give to folks.

Grunenwald: Is there anything else we haven’t mentioned that you want to call out, or that you’re excited about in the shop?

Remillard: I’m excited to get people in here. It’s been two years of really a lot of blood, sweat and tears trying to get it ready to go, and just having the first group of customers come into the shop, I’m really, really excited about.

I also want to mention the city. Miamisburg has been fantastic throughout this whole thing. Early in the process, they gave us a $5,000 grant to help us out, to help with like the inventory and everything. The city has been just awesome with any questions that we have about starting the business and getting established.

Then, on top of it, just this downtown area in general. I grew up in Miamisburg, and when I was little this area really wasn’t a place you wanted to come spend time, and over the last ten or fifteen years Miamisburg has done a phenomenal job with this main street, bringing in the shops and the restaurants and the bars. And now with the DORA, it’s great and we’re hoping a lot of foot traffic down here will generate a lot of customers and a lot of comic book fans.

Grunenwald: You’ve got a movie theater right across the street. You can’t go wrong.

Remillard: Yeah, we just walked over and saw The Batman this weekend. So it’s great, and it’s a community down here. Actually for The Batman, Doug Sorrell, who runs the theater, he actually put before The Batman, every time they show it they have a little ‘Welcome to the neighborhood, Monocle Comics & Coffee’, showing our opening date and everything. It’s definitely community and it’s been just been awesome down here. I think there’s a lot of opportunity down here. We’re glad to be here and we’re glad to finally get this thing started.

Drop It: Block Paradise Review
Matt Hancock Was Paid $400,000 To Appear On ‘I’m A Celebrity… Get Me Out Of Here!’
Five of the Most Weird and Wonderful DC Hero/Villain Team-Ups
Michael Peña Wishes Jeremy Renner Well After Heroic Snowplow Accident
Genshin Impact custom cursor gives you an ultra cute Hu Tao