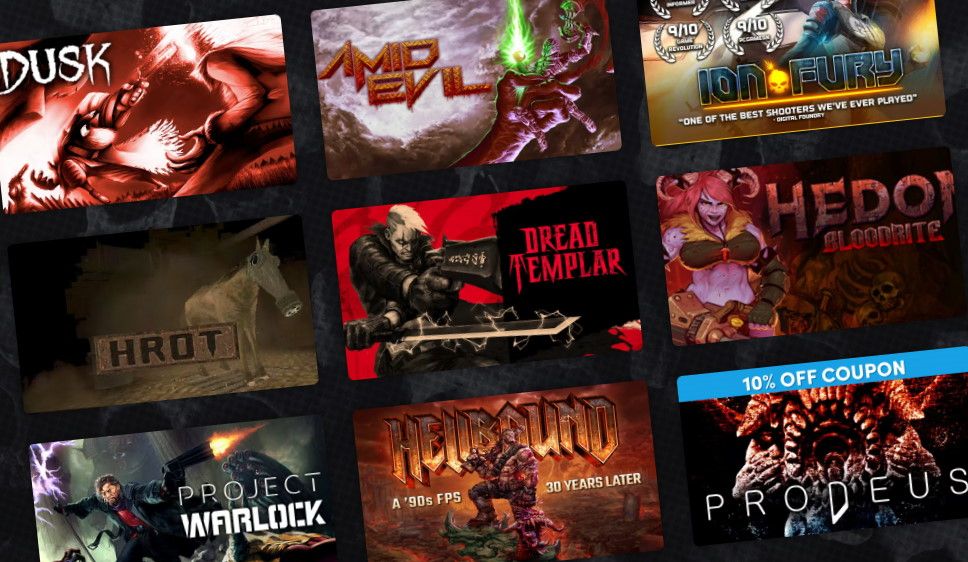 Humble Bundle has released what I personally think is one of the best cheap game collections it’s put together in a very long time: The Best of Boomer Shooters Bundle, which packs together 10 really good shooters including Dusk, Amid Evil, Ultrakill, and Ion Fury for just $12.

First things first: A “boomer shooter” is essentially any shooter that hearkens back to the old-time classics of the 1990s. Some are direct homages with a deliberately retro visual style, while others dress up old-school gameplay with the hottest in swanky new graphics. It’s a bit nebulous, as these things often are, but if you’re bunny-hopping, blasting everything that even looks like it might move, and your hand is cramped when the level is cleared, odds are you’re playing a boomer shooter.

Back to the matter at hand, that’s what the new Humble Bundle is all about. There are, as always, three tiers to choose from, but only one that’s really worth your time. For $1, you get Hellbound, a fast-paced, vaguely Doom-like heavy metal shooter. (There’s a demo on Steam if you want to check it out without spending that one single dollar.) For beating the average bundle price, currently at $11.58, you’ll get Hellbound plus Hedon Bloodrite and Project Warlock, neither of which I have played and thus cannot comment on.

The top tier is where it gets good. For $12—less than 50 cents more than the three-game bundle—you get those three, plus:

I don’t want to oversell it, but that is a hell of a deal. Dusk and Amid Evil both scored in the high 80s in our reviews, Ion Fury is the Duke Nukem game we should’ve got, and Hrot is an intensely weird and brutally unforgiving minimalist journey through an Eastern Bloc country in an alt-history 1986.

Any one of those games is worth the price of admission in my opinion (I haven’t checked out Dread Templar yet, but it looks cool), and each of them normally sell for well over $12 anyway except for Project Warlock, which is $12 spot-on. If you’re a shooter fan, getting them altogether for that price is not a deal to be missed.

Already own all these games but got the bundle just to donate anyway? (well done) want to GIVEAWAY the spare Steam keys on Twitter??@ me with your giveaway Tweet and I’ll RT it!And don’t forget to use that slider when you order. We Love You and https://t.co/yodCaUCaae pic.twitter.com/xOvoQiEXk5March 4, 2022

There are also a pair of coupons in the bundle, for 10% off Prodeus, a wildly violent blend of modern technology and retro aesthetics, and 25% off Ultrakill, the game we called “even more metal than Doom”—both of these are excellent shooters too.

Humble’s Boomer Shooter will be available until March 25. A portion of funds raised will go to support the AbleGamers charity and a charity of your choice.