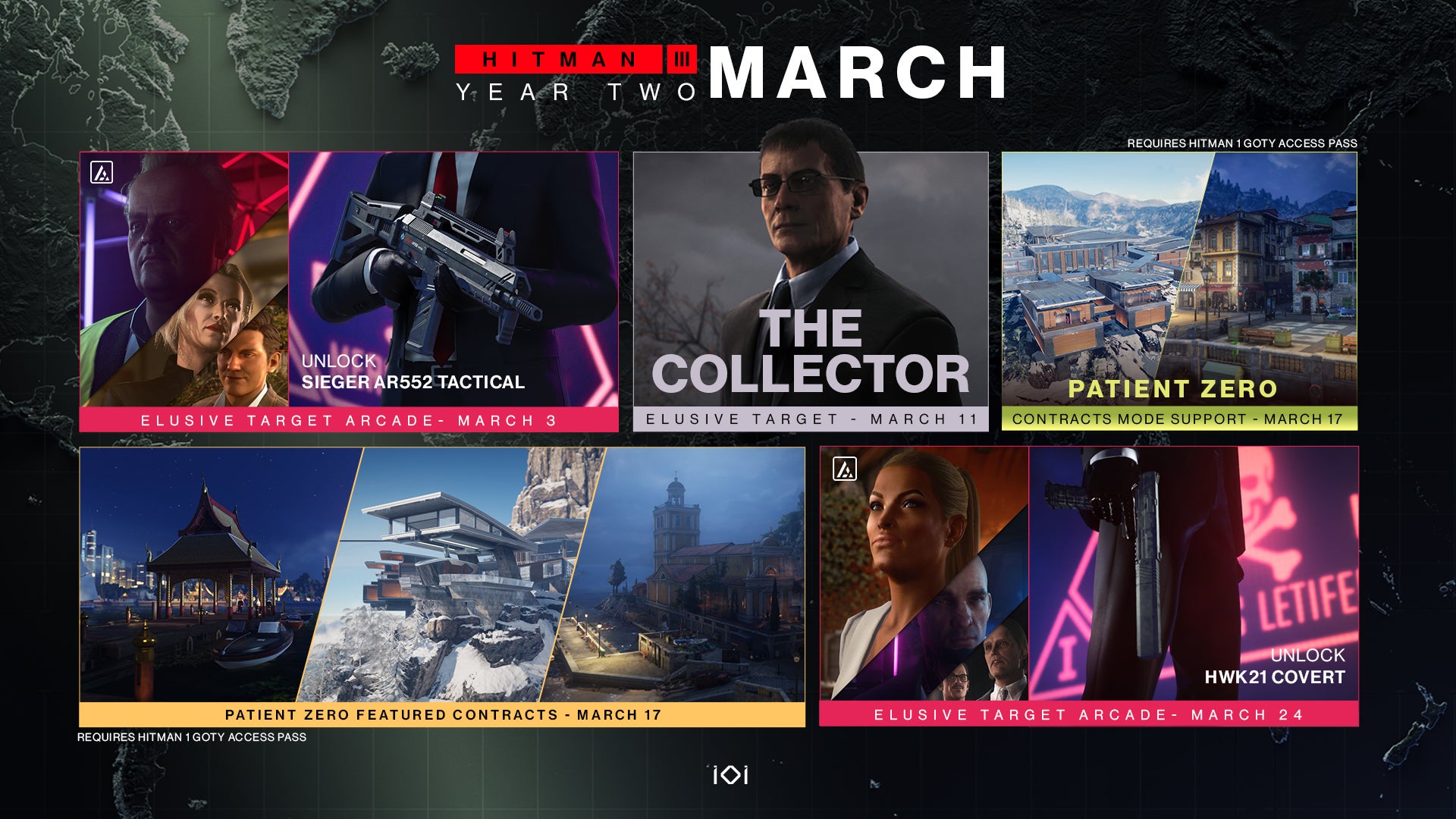 IO Interactive has outlined what Hitman 3 players can expect for the month of March.

Players can expect a reworked Elusive Target Arcade, new Arcade contracts, the return of an Elusive Target, and enhanced support for Contracts Mode.

Kicking off today is a new batch of three Arcade Contracts, one for each game in the Trilogy: Nebulae, Genera and Vitae. Complete any one of them and you’ll unlock the Sieger AR552 Tactical.

Changes include a reintroduction to the mission briefing for each individual mission, there will now be one single complication that is persistent throughout each Arcade Contract, complications from The Deceits have been removed and these include “Hide All Bodies” and “Camera Countdown”. The only remaining complication is “One Pacification”.

It has also chosen to preserve the “Hide All Bodies” complication in The Ellipses to stay in line with the choice of retaining the first complication from each Contract and to avoid issues with the leaderboards. It won’t be coming back in future Arcade Contracts.

Changes are also coming soon to Elusive Target Arcade Contracts. These will feature three targets per Arcade Contract. Complications that are considered to be “creatively restrictive” or can result in instant failure, will be avoided – this includes the ‘Hide All Bodies’ complication. The team is also investigating making all ET Arcade complications optional. If it doesn’t encounter issues, this will be implemented with the next patch.

On March 11, Elusive Target The Collector will return, taking players back to Dartmoor. You will have 10 days to eliminate him. You can find out more on the target in the video above.

March 17 will see support for more maps in Contracts Mode. Out of the four missions from the Hitman 1 GOTY ‘Patient Zero campaign’, The Source (Bangkok) is already supported and The Vector (Colorado) won’t be supported in future due to it’s dynamic nature and unique Sniper set-up. The team has revisited the other two maps from the Patient Zero campaign and added Contracts Mode support for them this month. The Author (Sapienza) and Patient Zero (Hokkaido) will be added on March 17. You will need to own the Hitman 1 GOTY Access Pass DLC to play or create contracts on these missions.

Of particular note, the virus contamination has been removed from the Hokkaido mission as the team felt it was “too overbearing” for Contracts Mode.

There will be Patient Zero Featured Contracts, one for each mission and together they will form a mini-campaign of sorts.

And finally, on March 24, a batch of Arcade Contracts for Elusive Target Arcade will be released. This batch will also include an Arcade Contract consisting of Elusive Targets from each game in the trilogy. Once you’ve successfully completed any of the three, you will earn the HWK21 Covert.