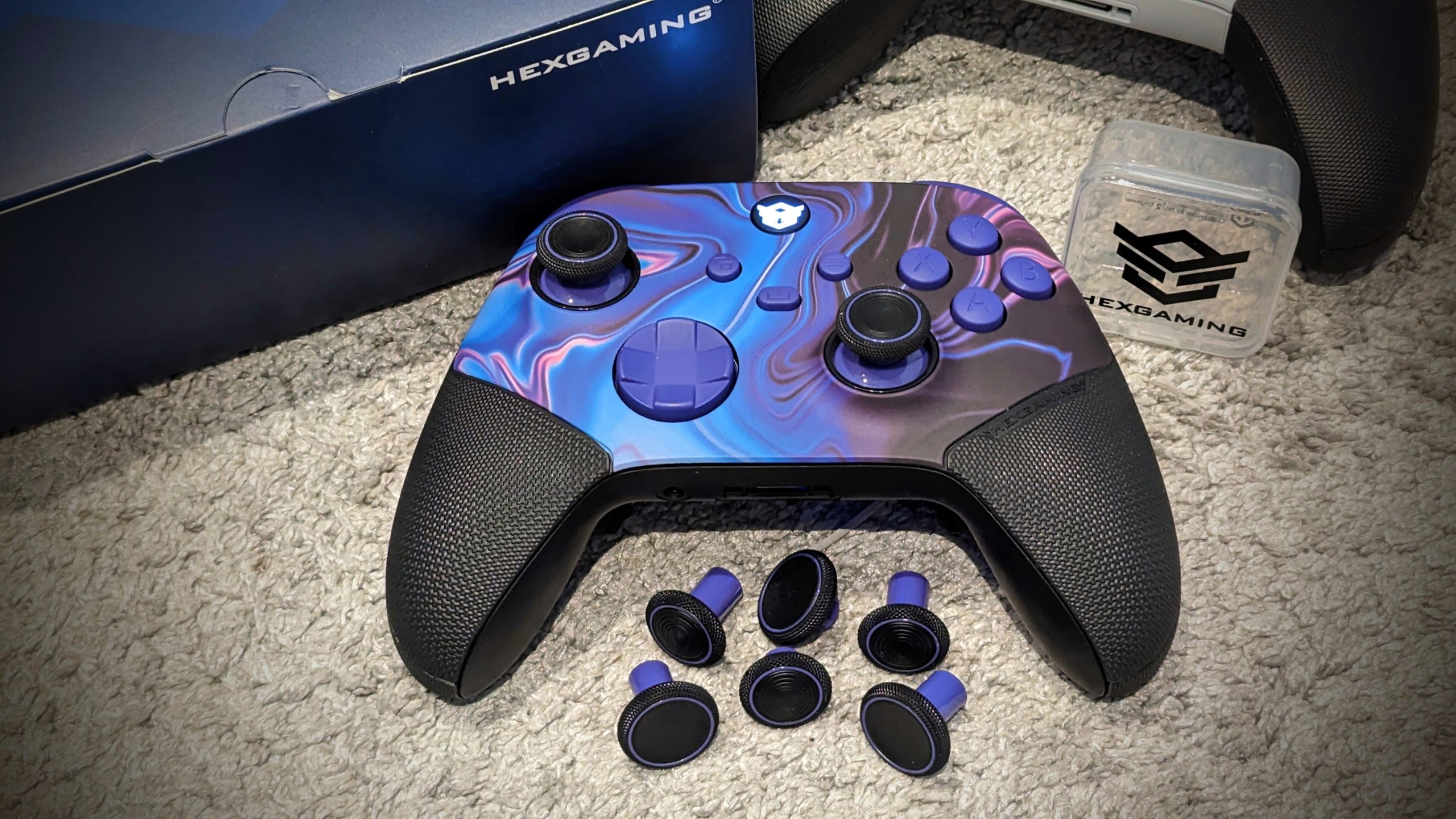 It’s taken a good few weeks. It’s taken us to put down and step away, to come back at a later time. But finally we understand the draw of the HexGaming ULTRA X Controller for Xbox. And right now, as we type this, we love it. Ask us again in a week  and our thoughts may change, but as of now, this is the controller you want in your hands. .

We’ve had a love-hate relationship with HexGaming’s ULTRA X Controller for Xbox. We’re not really sure why though for it’s a brilliantly well put together Xbox controller. It’s wireless, it’s got programmable back buttons, it’s got amendable thumbsticks, it looks flipping great in its purpley-blue Origins of Chaos twang and when combined with well textured grips, trigger stops and multiple profiles, we’re not sure how anyone can not love it.

But it’s taken us a good few weeks to fall in love with this one. Now we’re here though, we hope that adoration stays put. We feel it must.

HexGaming, as a company, wants to help you take your gaming to the next level. And they are doing this by creating performance built controllers for both Xbox and PlayStation, near on promising that they’ll help you gain more wins. With more than a decade of customising gamepads behind the parent company – eXtremeRate – HexGaming know what it takes to create a more than decent controller and it’s with this in which they are capable of creating a seriously premium, highly customised device.

We’ve been hands-on with the HexGaming ULTRA X Controller for a good few weeks now (the ULTRA X with Adjustable Triggers & Rubberized Grip Faceplate – Origin of Chaos edition, in fact) and straight out of the box, fell in love with it. But then we used it and realised that it takes a little while to get used to the quirky nature of what HexGaming have created. Much of that is down to the protruding trigger stops on the left and right of the controller; stops that initially feel strange to the touch, impeding your grip on the controller. We were also finding ourselves hitting the programmable K buttons on the rear of the controller, pressing by accident when in the heat of the moment.

Honestly, the ULTRA X annoyed us for a while. But then it all clicked, the love rolling in.

Sitting at the exact same size as a standard Official Wireless controller for Xbox, the ULTRA X will be instantly familiar to all Xbox gamers. It’s set-up in the most basic terms just as those which Microsoft ship in the thousands, running standard Xbox configurations for pretty much everything on the face – the two thumbsticks, the D-Pad, the face buttons, Menu, View and Share. In fact, looking at the controller from the top-down, it’s only the stunning Origin of Chaos faceplate design and replacement HexGaming Nexus button in place of the iconic Xbox Nexus that makes this look any different from the norm.

But pick it up and you’ll instantly find differences.

There are contoured lumps and bumps on the hand grips for one, ensuring that your grip is heightened. That is amplified by the textured grip wraps that run all along the rails themselves, front to back. Neatly that grip allows a HexGaming logo to creep in too. It’s a pretty understated logo, but it’s there if you look hard enough.

Round the side and you’ve got a couple of trigger stops, as HexGaming gives the player the opportunity to amend trigger presses between the 1.5mm Short Trip, into the more standard 7mm Long Trip. It’ll all depend on the game at hand as to which you decide to use, flipping the switch on the fly as you go. We’ve preferred to stick with the longer press, just as we’re creatures of habit and like the feel it delivers; and because we can’t keep away from Forza Horizon 5 or any of the other racers on the market. But if you’re a sharpshooter plying your trade in something like Call of Duty: Warzone, you may well feel that the shorter dips are more preferable.

Aside from those stops, the triggers and bumpers pretty much feel as you would expect of an Xbox controller. You know, brilliant.

A 3.5mm audio port sits in the standard place, as does the older school connection that is pretty much dead in the water these days, but from there switching around to the back of the ULTRA X and you’ll discover no less than four programmable K buttons. These are action buttons in all but name (K being Hex’s call, whilst the likes of GameSir tag those on their G7 as M buttons). These buttons are placed so that the two smaller ones – K1, K3 – sit right under your middle finger as you grip, making them near perfect for setting up as something like a gear change in Need for Speed Unbound. It’s these two which we found ourselves hitting accidentally whilst we were getting used to the ULTRA X.

Below those are the K2 and K4 buttons, again programmable. We’ve found that personally our middle, third, fingers have been used to hit all four buttons, whilst with some controllers it’s been a combination of third and fourth digits. The two larger buttons are just a little too high for our fourth fingers to hit with regularity. Any of the usual fourteen face buttons, triggers, bumpers and sticks can be assigned to these four buttons and programming them couldn’t be easier – use the rear-mounted, LED-surrounded, setting button to choose your profile and to action programming. It’s a simple process that takes mere seconds.

But what if you need more customisation? Well, HexGaming have you sorted there too with a plethora of thumbstick types included in the box. You’ve got a couple of standard, pretty generic concaved sticks, but these can be whipped out for lengthier, wider versions, or a standard length, widened stick. There are some domed thumbsticks too and even though we’re not sure why on earth anyone would ever choose convexed stick faces over the tighter, more precise concaved, a single regular length and two longer domed sticks are in place. It all boils down to what you want from a controller, and the type of games you play. Whatever it is though, HexGaming have you covered. Popping thumbstick tips on and off is a cinch.

We’ve used a lot of Xbox controllers over the last few years – the official, the third party, the cheap and the expensive. We’ve even detailed some of the very best alternatives to the Xbox Elite controller, but now we’ve found HexGaming and their ULTRA X Controller for Xbox. And we’re going to say it now – yes the HexGaming ULTRA X is an expensive controller, but if you’ve got the cash to spare, we’re not sure you’ll find a better option. As it stands, this is our favourite controller to use, no matter what session awaits.

Dip into what HexGaming has created and you may well discover that same love. At least in the long term.

A huge thank you goes out to HexGaming for providing us with their ULTRA X Controller for Xbox with Adjustable Triggers & Rubberized Grip Faceplate – Origin of Chaos Edition. You can visit HexGaming.com direct and pick up a version that suits you – they’ve got an absolute ton. Expect to pay around $250.