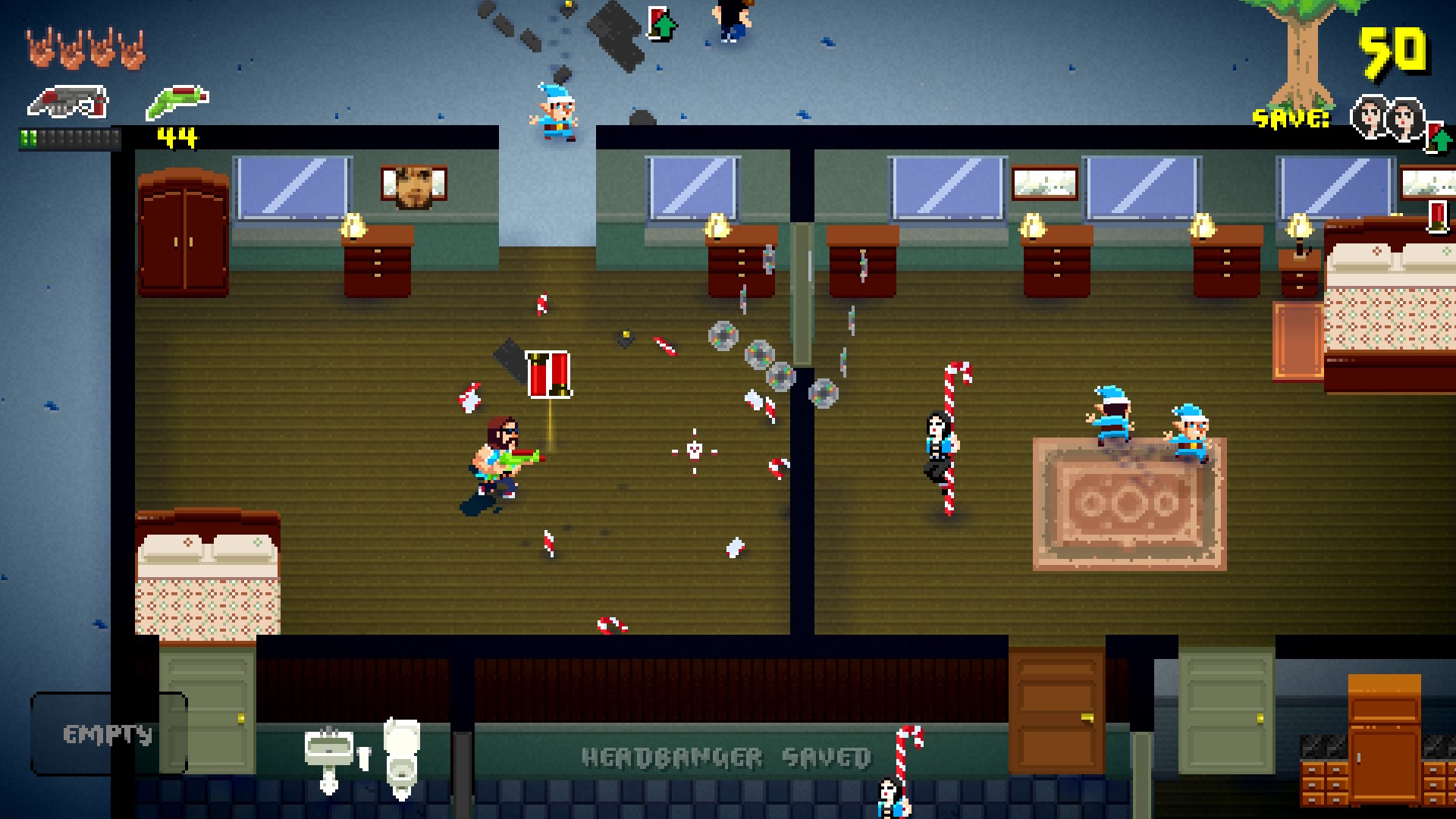 Another week, another Ratalaika Games game, with Headbangers in Holiday Hell released just in time for the holiday season. I have to be honest, I’ll be amazed if there is any bottom left in the barrel after scraping it this hard.

Anyway, what the prolific Ratalaika team have served up this time – along with Vikerlane and Hammer & Ravens – is, in effect, a twin-stick shooter with a thin veneer of Christmas, and an even thinner veneer of heavy metal to try and make it stand out. Is the world ready for another retro styled Ratalaika game, and more to the point, am I? Let’s head into the holidays and find out.

Story? Well, buckle up cos this is a deep one. Santa hates Metal. As a genre of music, I mean, not the existence of metal in general. As the game opens, Santa appears, throws an explosive present at a group of headbangers, and runs off, leaving his elves to kidnap the hapless metal dudes and dudettes. Now, clearly, we can’t let this slide, and so the very honour of metal is on the line. And who better to sort the situation out than a surviving headbanger, armed with a water pistol? Basically the story is to rampage through various levels, watering elves who must be related to the Wicked Witch of the West as water kills them, find Santa, and free captive headbangers along the way. What could be easier?

That moves us into the gameplay then, and I’m using that word very loosely here. What we have is an attempt at a twin-stick shooter, without any of the precision that the very best of these games brings to the table. The elves are a small target, to be fair, but they are almost impossible to hit, and with limited ammo on offer, it is much more efficient to forget about the gun and steam in with melee attacks. Yes, a simple press of RB will see you bring your butt into play (your gunbutt, stop sniggering) and give the elves a good slapping. If you manage to stun an elf, the melee button allows you to “glory kill” them, gaining extra rewards. I feel like I’ve seen this mechanic somewhere before…

Killing enough enemies will allow you to then make use of the overdrive state, where you suddenly have unlimited ammo for a while and this adds another level to the deep and tactical gameplay. Just kidding!

There is also a somewhat slight roguelite element to Headbangers in Holiday Hell, as when you kill enemies or smash appliances in the houses, or items outside, they drop what are either CDs or the world’s biggest coins. Collecting these will give you credits, which can be spent in-game at what look like Coca Cola machines to buy ammo, and at the end of a run to either upgrade your existing weapons, or to buy newer ones. You can also spend credits on upgrading your character, with upgrades available to your max health or ammo capacity, for instance.

Obviously, buffing yourself for your next run will make you harder to kill, so this is possibly a wise investment. My only issue with this shop, as such, is that it is very expensive to buy things, and much grinding will have to take place to buy everything. Unfortunately, Headbangers in Holiday Hell just isn’t good enough to make that feel like a worthwhile usage of time.

Visually and whenever you hear the word “Ratalaika” and “game” in a sentence, you kind of know what you are going to get, That is certainly true here as Headbangers is delivered in a pixel art, retro styled way, just for a change. The action is viewed from a top-down perspective, and while the characters are reasonably well designed, everything else looks pretty basic, to be honest. The levels are laid out in suburbia, it appears, with houses to explore people to rescue, and various elves to dispatch. And that is about it. It is suitably colourful, with it being the holiday season, but these graphics wouldn’t make a pocket calculator sweat.

You’ll find similar going on with the audio too. The soundtrack is nice, as I am partial to a bit of metal, so the thumping soundtrack works on a personal level, but more annoying are the rubbish vocal clips, with various folk shrieking “Naughty” or “That’s not very nice” as you fill them in. In fact, if I have to listen to our hero say “I’ll jingle your bells” one more time, I won’t be responsible for the consequences… Other than that, add in the usual kind of shooty effects and you are there.

So what is actually wrong with Headbangers in Holiday Hell? Well, it seems to be the usual Ratalaika experience in many ways – a game that does have good ideas that are then ruined by poor execution. For instance, why can elves fire through walls? What is the point of putting an achievement in the game for finishing a level without getting hit, then giving the enemies the ability to hit you through walls?

Also, the limited ammo thing hampers the gameplay, as the aiming is so imprecise that the best you can hope for when shooting is to hit something “over there, somewhere”. Melee is the way to go. Granted, there are clever ideas like creating pools of water and roping toasters in to kill enemies, but in reality the controls are a bit dodgy, so much so that it is just an exercise in frustration to try and get the enemies to fall for your cunning trap.

In all, Headbangers in Holiday Hell isn’t metal. It is barely even tinfoil.

Headbangers in Holiday Hell is on the Xbox Store