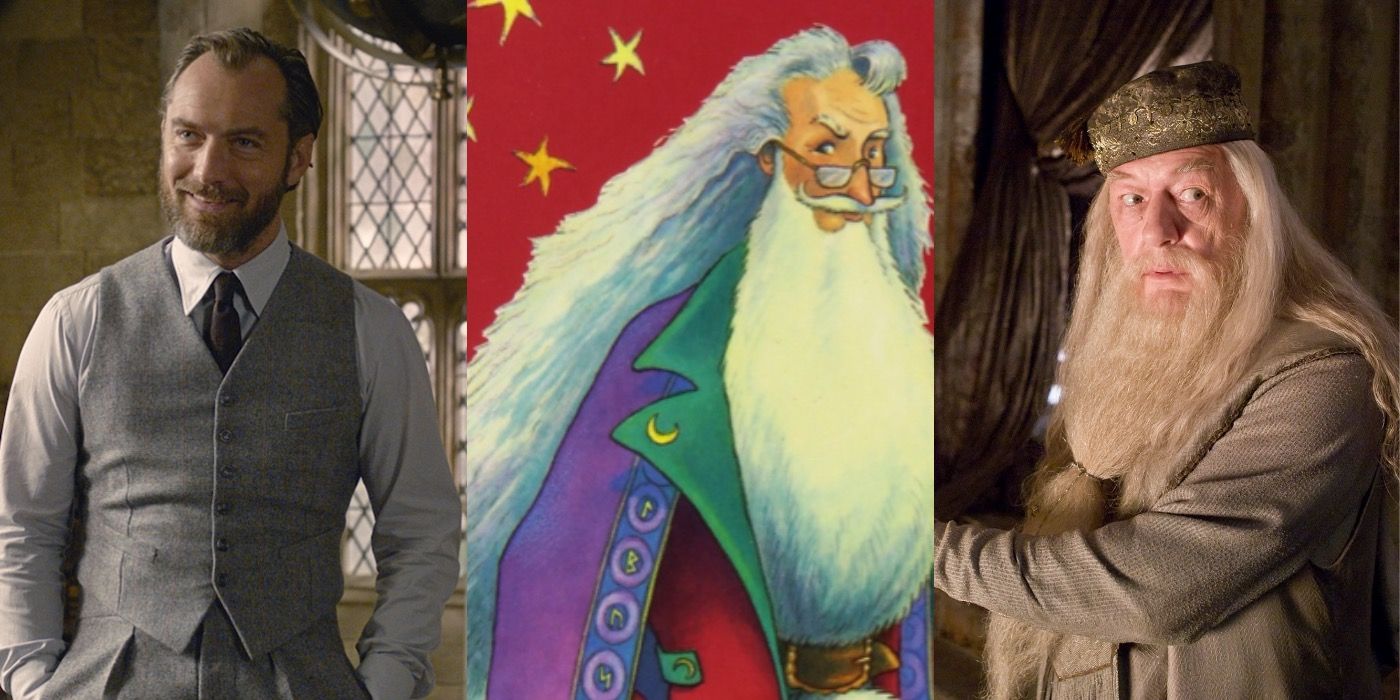 Not every Hogwarts teacher is up to the task of educating and helping young minds. Severus Snape was a bully, Dolores Umbridge was a true villain, and Gilderoy Lockhart was utterly useless, contrary to what he’d written in all of his books. No matter who is employed, though, Albus Dumbledore is a brilliant presence at the head of the castle, and throughout Harry Potter‘s time at the school, he aided the Boy Who Lived throughout his difficult battle with Lord Voldemort.

RELATED: 10 Ways That Ron Weasley Is Smarter Than Harry Potter

However, while the Harry Potter movies did a good job at bringing the character to the screen, not every little detail was able to be transferred. There are some facts that only fans of the source material know about one of Hogwarts’ most famous headmasters, from the extent of his history with Grindelwald to his opinions on those he employed.

Updated on March 17th, 2022 by Stacie Rook: Whether old or young, one of the most memorable figures from Harry Potter, with a complex history and approach to morality, is Professor Albus Dumbledore. Dumbledore has intrigued fans not only in the Wizarding World’s main series, where he was played by Richard Harris and Michael Gambon but also in the Fantastic Beasts saga, where he is portrayed by Jude Law. This younger version of the character is set to have a central role in the upcoming Fantastic Beasts: The Secrets of Dumbledore, uncovering more of the wizard’s past.

One death that the Harry Potter movies don’t show is that of Peter Pettigrew, who perishes in the final book of the series. Wormtail dies after hesitating when he’s instructed to bring Harry, Ron, and other prisoners up to the dining room in Malfoy Manor, showing Lord Voldemort just the slightest disloyalty. His silver hand, given to him by the Dark Lord in Goblet of Fire, chokes him to death – much to the horror of those present.

In the Prisoner of Azkaban book, however, Dumbledore foresees this. Shortly after Pettigrew escapes the clutches of the Dementors, the Hogwarts headmaster predicts that there will be a time when Harry is grateful to have spared Wormtail from certain death.

He Saved The Life Of Remus Lupin

One of Dumbledore’s best decisions Prisoner of Azkaban was hiring Remus Lupin as Defence Against the Dark Arts teacher. Lupin’s forced to leave at the end of the year though, after Severus Snape reveals his true identity as a werewolf. While this was a shock to Lupin’s students, Dumbledore already knew the truth.

When Remus joined Hogwarts as a student, Dumbledore put measures in place to ensure the werewolf could live as normal a life as possible. In fact, he had the Whomping Willow planted to hide a tunnel that Lupin could use to travel to the Shrieking Shack on full moons, having a place to transform without putting anyone in danger.

He Knew About The Room Of Requirement

The Room of Requirement is a secret room within Hogwarts that will be anything someone needs. Need a room to hide something? Or to lie low? Or to go sleep? It’s able to do all that. However, it’s top secret and very few people know about it’s existence.

In the Goblet of Fire book, though, Dumbledore lets it slip that he knows about it. He tells of stumbling across it on a full bladder when it was full of chamber pots. Though he doesn’t actually call it the ‘Room of Requirement’ at the time, Harry puts two and two together when he comes to teach pupils there the following year.

He Hired Sybill Trelawney To Protect Her

Divination Professor Sybill Trelawney makes her debut in the Prisoner of Azkaban. She’s able to predict some things—like Neville breaking a teacup—but generally isn’t taken very seriously. Movie fans can be forgiven, then, for wondering why Trelawney was hired in the first place, but the books have an answer.

In the Order of the Phoenix book it’s revealed that Trelawney created the Prophecy about Harry and Lord Voldemort, and that when Voldemort found out, Dumbledore hired Trelawney for her own protection. As she’s unaware of the chain of events she set in motion, Hogwarts is likely the safest place for her, though this case of Dumbledore being reluctant to reveal vital information to those it concerns is representative of a larger flaw of his character.

In the Half-Blood Prince movie, fans see two old memories. One is Dumbledore’s, showing his first meeting with Lord Voldemort at an orphanage in London, while the second belongs to Horace Slughorn, who told the Dark Lord how to make Horcruxes during their shared time at Hogwarts.

The book, though, details many more memories that Dumbledore collected. One of these is from a House Elf, who explains that Voldemort killed a woman named Hepzibah Smith in order to take her precious belongings, and forge a Horcrux from one of them. The book sequences that show these memories prove just how long Dumbledore has been working against Voldemort, and how complex the fight is.

He Snubbed Lord Voldemort For A Job

Another memory the Half-Blood Prince movie doesn’t show is Dumbledore’s himself. A detail from the books everyone forgets, the Hogwarts headmaster tells Harry about the time Lord Voldemort turned up to the school, many years after leaving, to request a job. The Defence Against the Dark Arts job, specifically.

Unsurprisingly, Dumbledore declines. He tells Tom Riddle that he’s fully aware of the wizard’s descent into darkness. Remaining determined, though, Riddle uses this trip to hide Rowena Ravenclaw’s old diadem in the Room of Requirement, which he’d turned into a Horcrux, making Dumbledore’s eventual search for them far more difficult.

He Had A Funeral And It Was A Big Deal

Dumbledore is killed by Severus Snape during the sixth movie. Though it remains a poignant affair, the Hogwarts headmaster’s funeral wasn’t shown.

In the Half-Blood Prince novel, it’s a huge affair. Just about everybody turns up to pay their respects to this big figure of the Wizarding World. Allies from the Order of the Phoenix, Hogwarts, and Ministry of Magic all attend, while even the odd enemy like Dolores Umbridge and Rita Skeeter make an appearance.

He Got His Own Portrait

Shortly after Dumbledore’s death in the sixth book of the series, Harry, Ron and Hermione all go to his old office. Once there, they see a portrait of their old headmaster looking back at them.

It’s Hogwarts tradition that, when a headmaster dies in service, they get a portrait of themselves put up on the wall. This is no different with Albus, and though the wizard made some questionable choices, with some believing that Dumbledore is the real villain of the franchise, Harry remains glad to see Dumbledore receive this honor.

He’s Unsure If He’s A Killer

In the Deathly Hallows book, fans learn plenty about Dumbledore’s backstory. While he was a brilliantly skilled wizard, he made many mistakes over the years. It’s revealed that he was once a fanatic keen on enslaving muggles with Gellert Grindelwald, a dark wizard with who he harbored a deep, romantic longing for.

When Dumbledore came to his senses, a battle broke out between himself, Grindelwald, and Dumbledore’s brother Aberforth. In the crossfire, his sister Ariana Dumbledore was devastatingly killed. In the frenzy of battle, though, none of the trio knew who had fired the fatal shot, and this secret of Dumbledore could be explored in the newest Fantastic Beasts movie.

He Became Prefect And Head Boy

During his time at Hogwarts, the young Dumbledore was a great student and was inevitably top of every class – just like Hermione Granger.

It’s revealed in the Deathly Hallows book that he became Prefect and Head Boy during his time at Hogwarts. This story is told by Aberforth, who is rather bitter about the whole thing. This makes sense though, as it must be pretty difficult to be stuck in the shadow of such a wizard, especially knowing all he did about his brother’s darker years.