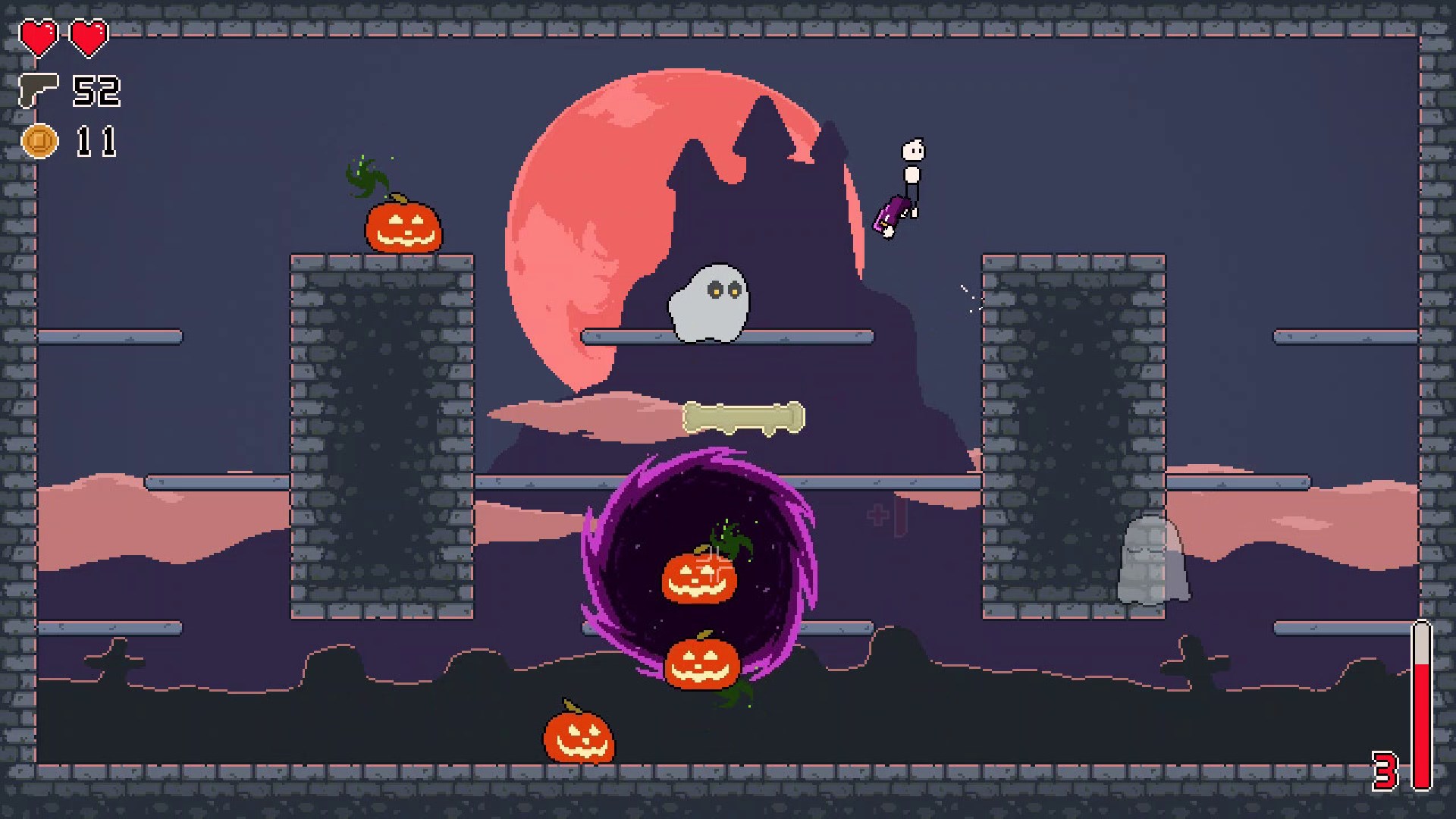 Gunkid 99 from developers Yongjustyong fills out a genre that I’m not really sure about. Basically, this is a score chaser with a gun collecting/shooting twist, and I for one haven’t really played anything like it before. Is different good, or is this too different for its own good? Join me as we dive into Gunkid 99’s weird world…

Now, normally in this section of any review I would give you an overview of the narrative threads running through the game. However, in the case of Gunkid 99, it’s going to be a short paragraph – there isn’t a story at all. What there is in place of any narrative though is an objective: run through a series of 2D side-on arenas, collect weapons and stay alive. The collection of the weapons is the main point of the gameplay: in order to complete a level, you have to pick up and stash a certain number of weapons that spawn in random locations around the stage. So far, so easy, right? Well, it will come as no surprise to learn that it’s a little more involved than that!

In Gunkid 99 there are enemies that are trying to stop you from achieving your goal. These enemies spawn in continually, and while there are no points for shooting them, with running about and collecting firearms at the fore of things, it would be almost rude not to blast a couple of them.

This means that there is an element of a twin-stick shooter to go with the platforming antics, and obviously the more enemies you shoot, the easier your life will be as you have more room to jump about the place. There are a few different enemy types in place too, ranging from creatures that float about the place, to ones that try to headbutt you into oblivion, to things that shoot fireballs and many more. Luckily, as you go through the levels, you can also unlock various power-ups to help you – and neatly it is possible to create a loadout of your favourite types of guns, so the only weapons that spawn are ones that you find easy to use. It’s obviously a lot easier to shoot a baddie with a single round from a shotgun than to fire off six rounds from a weedy pistol after all.

So that’s a brief overview of the game, and to be fair, there’s not a massive amount more to say about the way it plays. What I can talk about is the actual presentation of Gunkid 99 though…

The graphics are best described as simple, but it must be said that the enemies, while being just a collection of pixels, do manage to portray a certain amount of personality. The hero character is also made to the same quality, and as he jumps and double jumps about the level, the weapons he picks up, equips and shoots are represented very well. I mean, it’s not of the level of a Tomb Raider reboot, but the speed of the gameplay and the way the game tears along at a great pace is pretty impressive. The sound is fairly minimal, mind, being mainly gunfire, but it all fits the aesthetic of the Gunkid gameplay perfectly.

In terms of actual impressions and unfortunately Gunkid 99 doesn’t quite stack up. In fact, things are all a bit strange, mostly as the whole setup and any form of progress is tied to the amount of weapons that you collect, not of the things that you kill. It’s an odd premise but not necessarily a bad one, however it’s all too easy to be caught up in a firefight, and miss collecting a gun in the fairly tight time limit after it spawns. Do so and you’ll fail the level.

On the other hand, if you spend all your time just going for the weapons, the screen soon gets overrun with enemies, and this makes it impossible to move. I struggled with finding a happy medium if I’m honest, and that in turn affects the experience as a whole. The score chasing is the whole point – that and comparing yourself with those on online leaderboards – but to be brutal, it’s difficult to care when there is no overarching narrative to drive the action along. This means that while the controls are tight and up to the task, after a couple of levels Gunkid 99 begins to feel like a bit of a chore.

All in all, if you’re after a bit of arcade score chasing, Gunkid 99 may be right up your alley. Sadly, though, the more you play, the more you may well struggle to care about the fate of the Gunkid.

Gunkid 99 is available from the Xbox Store

Days of Our Lives Round Table: Is Clyde the Killer?
Review: Airoheart – Adequate Adventuring For Link To The Past Obsessives
A Plague Tale: Requiem Won’t Have Any ‘Filler’ Content
NBC Hurricane Reporter Using Condoms to Protect Microphone
Terraria’s Huge New ‘Labor Of Love’ Update Is Now Live, Here’s What’s Included