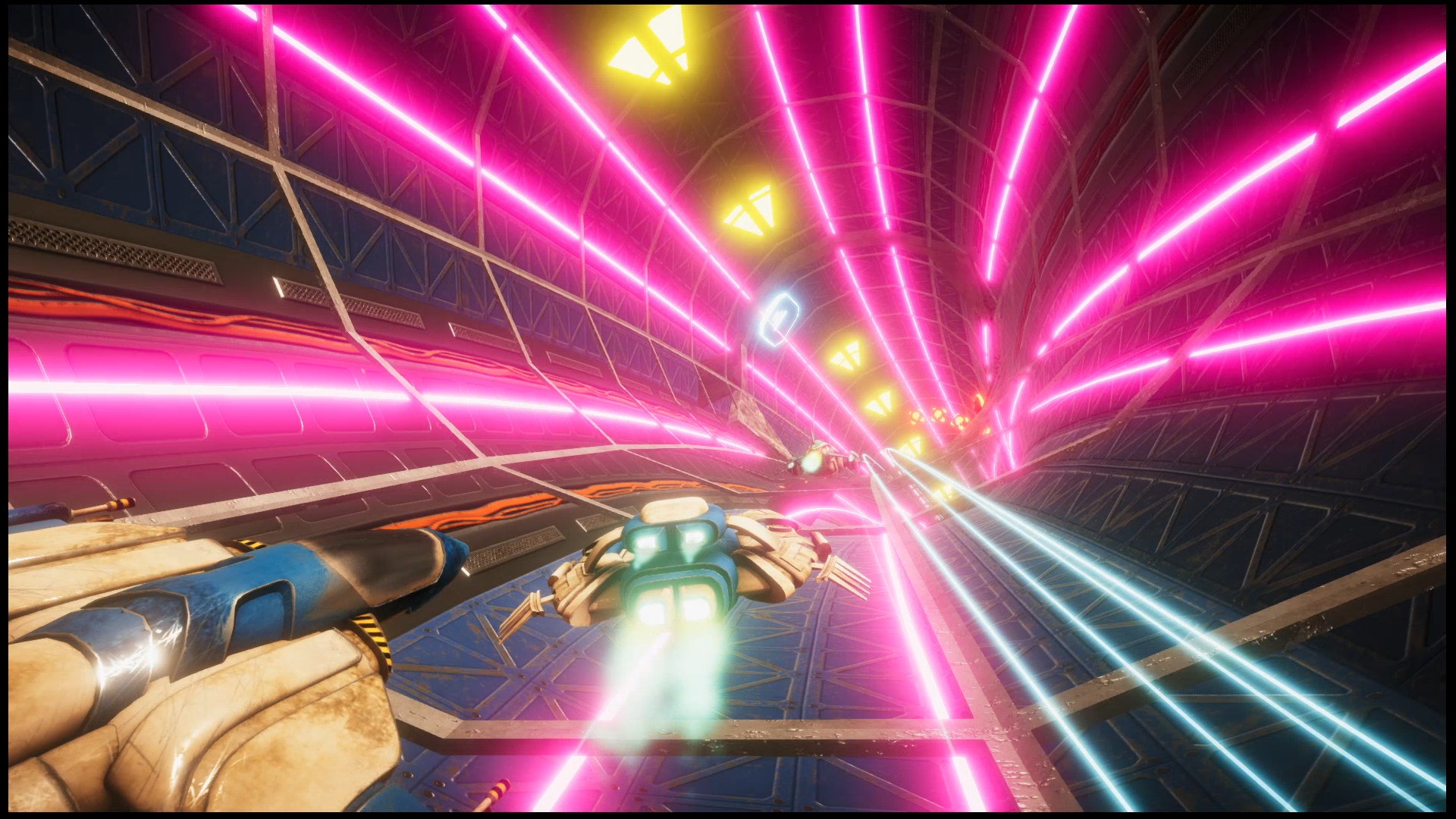 For years the anti-grav racing scene has followed in the stream of the genre founder, and leader, WipeOut. In fact, even though it’s been decades since that game first arrived on the scene, there’s been little to match it. That’s not stopping Repixel8 from giving it a go though, dropping players into the cockpits of Gravity Chase.

The latest anti-grav racer which is attempting to make a mark on the scene, Gravity Chase comes to market in an initially barebones stylee. In fact, from the menu screen, Repixel8 have left players with nothing but a ‘Race’ option. Thankfully from there, it all begins to open up a little more. Not a lot, but a little.

Giving options of racing through as a single player, or utilising up to four players via local splitscreen, your task is to get into the cockpit of any of ten different anti-grav crafts (split across three speed classes) and leave all other opponents in your futuristic dust. The best way of doing this is by flying over speed pads, dodging those which slow you down and picking up additional boost pickups. It’s a simple premise, but for the most part, Gravity Chase is just that. Simple.

Choosing a race type is also totally in your hands, whether that be a straight-up Arcade race, Combat racing or Eliminator events, as is the choice of difficulty, from beginner, through advanced and into expert. The higher the difficulty, the greater the rewards you’ll receive in terms of in-game cash and points. And what are cash and points used for? Well, the former of these upgrades your ships, but this is fairly limited, restricting the player to amendments to the handling, acceleration and top speed stats. The points themselves are then accumulated, with multiple unlockable tracks hidden under their lock and key. Hitting point milestones and unlocking tubular tracks is what Gravity Chase is all about.

When you do get into a race, no matter which of the three event types you decide to run, Gravity Chase just about does what is required of a game from the genre. It’s fast, it’s very fluid and it runs without a single stutter. Hats must go off to Repixel8 for being talented enough to have such a well rounded racer in their catalogue.

For all the good ideas though, Gravity Chase fails to really ever run with them.

You see, at no point through your race career will you ever really feel like you’re in a race to the death. Standard Arcade race types mostly play out with you keeping one eye on the track, with the other focused at the placings in the top left of your screen. Without being able to see, at a glance, how far ahead or behind you are in comparison to other racers – hell, Gravity Chase doesn’t even have a ‘look behind’ view – any event you are in just boils down to nailing the throttle, dodging the red slowdown pads and hoping for the best.

It’s a similar story for the Combat racing too. Whilst additional pickup options let you fill an ammo meter, you’ll only get to make use of that when your crosshairs begin to home in on opponents. A simple firing off of them will either see your opponents slowed or taken down, but there’s not really ever any skill required to do so. It’s just as bad when you’re the one taking damage; there’s no way of avoiding any form of destruction and rarely will you ever realise you are actually being hit, aside from an increase in your damage meter and additional cries of critical damage being splashed on your screen.

Thankfully the Eliminator races bear a little more fruit – but not a lot. With a countdown in place, eliminating the racer in last position as it ticks by, these do at least deliver a modicum of a race. Again, whether you can actually do anything in regards to your finishing placement, other than hope that you’re hitting the optimum line to get your around the track, is pretty much hit or miss.

Whilst Gravity Chase fails to bring too much to the anti-grav table aside from some serious grind and repetition, it does at least look and sound good. The variety of ships are neither here nor there, mostly as things turn into a blur no matter what class you are running, but the tracks themselves – the tunnels, the loops, the outer spheres and half pipes that they bring – all look good. And not once have we seen or felt a hint of slowdown, even on the fastest ships and across the quickest tracks. In terms of the Zero-G racing that it attempts to harness, there’s little faulting Gravity Chase.

It’s complemented well by a banging soundtrack too. WipeOut audio this is not, but the beats that power it certainly aid immersion.

On the whole, Gravity Chase falls short of being the anti-grav racer that you need in your life, but for some quick hits of adrenaline and speed, it just about does the business. Be understanding of a bit of grind and repetition, and you’ll find the flow of Gravity Chase to excite.

Gravity Chase is available from the Xbox Store

Don’t Worry Darling Red Carpet: See Harry Styles, Chris Pine, And More From The Premiere
Next Week on Xbox: New Games for September 26 to 30
Overwatch 2 Review in Progress
Outer Banks Season 3 Teaser Trailer: When Will the Pogues Return to Netflix?
Where to find scarabs in Genshin Impact 3.1