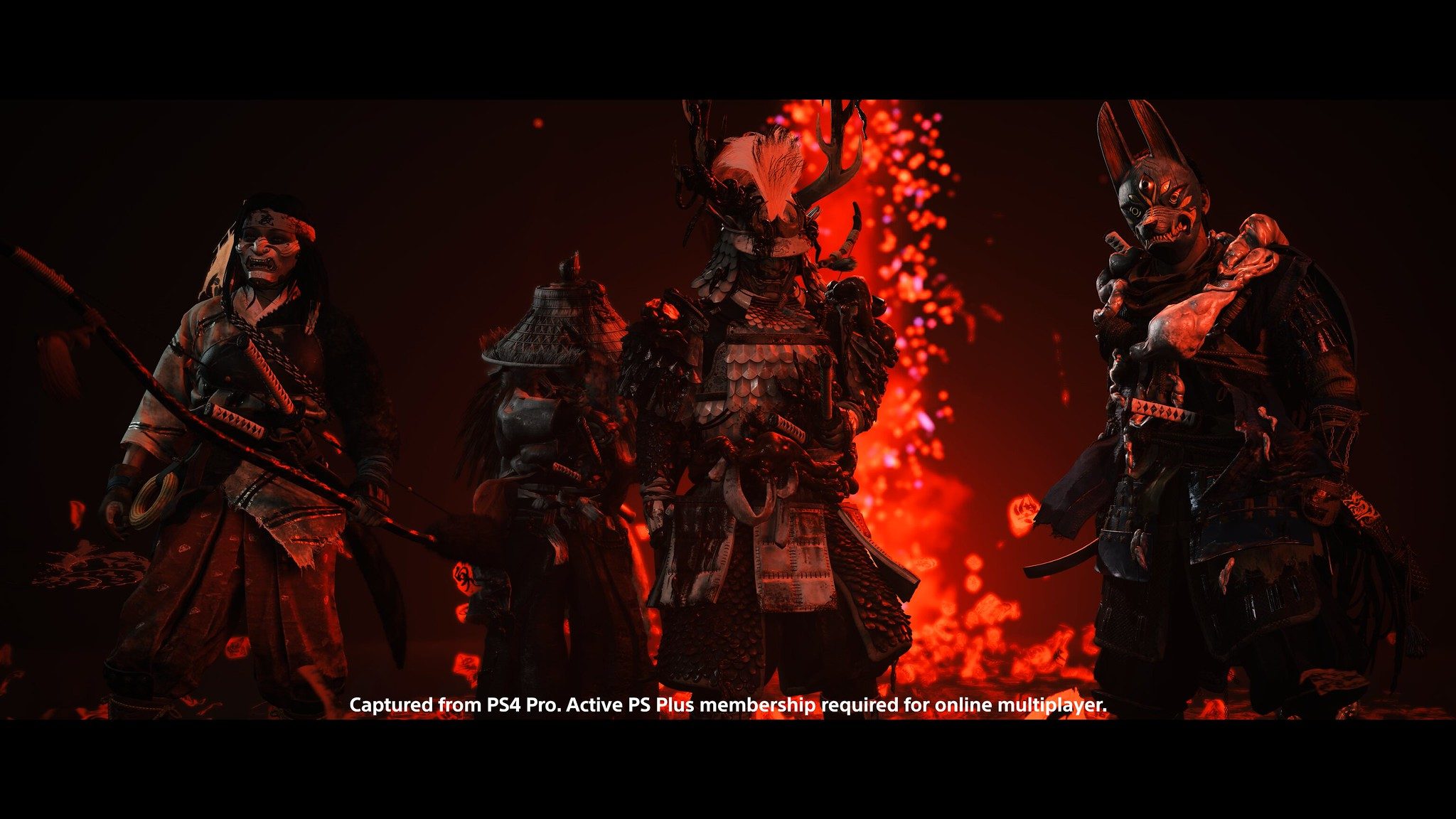 Hey everyone-  My name is Darren Bridges, and I’m the lead co-op designer for Ghost of Tsushima: Legends. To celebrate Legends’ inclusion as a bonus game in this month’s PlayStation Plus lineup, I wanted to give you all a window into our development philosophy and process.

For me, the journey started in 2016, when Nate Fox showed me the original pitch for Ghost of Tsushima and asked if I’d lead the design on the cooperative mode. I was excited… and intimidated! I knew it would be a challenge.

Concept art of our playable heroes

I happily agreed to work on it, and my first goal was to make sure we had the flexibility to make decisions that would enable a great co-op experience. A lot of the choices that work in single-player don’t translate well to multiplayer content (and vice versa). After several pitch attempts, we came up with one that really resonated: co-op would be set in a world of supernatural tales told by an eccentric storyteller that Jin meets in his travels.This “Legends” story framework gave us freedom to design and optimize the experience to be inviting, challenging, and enjoyable for multiple players, while still connecting thematically to the world and characters of Ghost of Tsushima.

Finding the fun… with friends (or randos)!

Once we had established a versatile foundation, we needed to ask ourselves- what actually makes co-op fun? There are many good answers, but here are three major elements that we focused on:

#1: Co-op is fun when you can play with other people

Short tutorial: The training mission takes about 10 minutes, and then you can immediately start matchmaking or playing with friends.

Wide availability: One of my early mantras in development was “The best feature we can add for co-op is all of your friends.”  We made the decision ahead of release to offer the mode to everyone who owned Ghost of Tsushima rather than as a paid DLC

Focused matchmaking, and Join In Progress: We intentionally designed our difficulty structure and Quick Play system to minimize the total number of matchmaking pools. This makes it easy to play the type of content you’re interested in while minimizing the amount of time you have to wait for a match. Additionally, if other players disconnect during a session, you can activate matchmaking again to fill their spot and keep going.

Escalating, Fresh Challenge: As you start replaying missions on harder difficulties, you’ll notice the introduction of new mechanics, rules, objectives, and enemies. This helps the content stay fresh and surprising, and also increases the necessity of working together as you get deeper into the experience.

An early prototype of co-op puzzles

It feels great to pull off a perfect parry counter or a headshot, but it’s even better when you know that someone watched you do it. Legends gives a lot of opportunities for players to be the “hero of the moment.”

Death from Above: My personal favorite co-op hero moment is to jump off a high point into a skirmish, and assassinate an enemy right in front of my allies. It makes me happy every time I manage it, and it makes me laugh when other people do it in front of me.

Ultimate Moves: One of our designers pointed out early the importance of audio for Ultimates. No matter how far away you are, you can hear the battle cry of another player using their Ultimate move… and when you’re laying on the ground and need help, it’s the best sound in the world.

Speaking of laying on the ground- the opposite side of being a hero is being helped by your fellow heroes. I am decent at Legends, but I still make dumb mistakes. Every time I get wounded in the first wave of a Survival match, I laugh to myself when someone kindly comes over to help me up. If only they knew they were helping up the lead designer… they’d probably be shaking their heads. 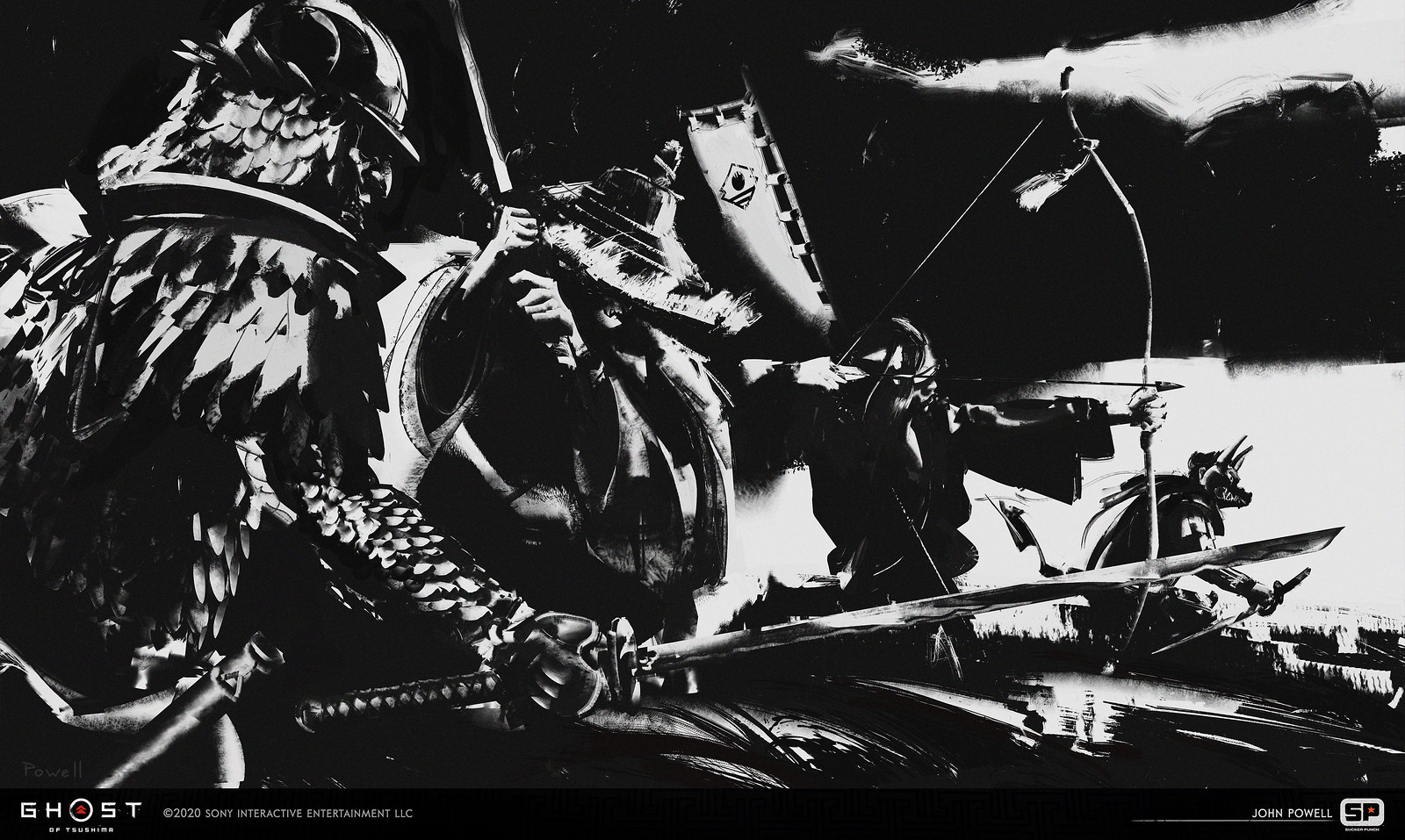 Four heroes stand at the ready

In our very first co-op playtests, we would ask players two survey questions: “Did you feel like you were contributing to the success of the team,” and “Did you see other players contributing to the success of the team”? We didn’t want Legends to feel like you were just playing a solo game with other people nearby. The essence of cooperation is working together, and we wanted the game to invite players to do so at every opportunity.

Easy Communication: It’s easy to work together if you’re on microphones with friends, but the Ping system allows players to coordinate actions even without voice communication.

Shared Success: Whenever possible, we designed the game to align players’ goals. Using a “Gift of the Kami” in Survival will benefit everyone (and if you coordinate, you can optimize the value). When you hit a Healing Drum, it will heal you, but also anyone else nearby (and you can Ping it first to let others know you’re going to activate it).

Purifying Cursed Gear items grants a currency reward to you, but also to everyone else who finishes the match.

Enemy and Encounter Design: Many of the enemies and mechanics you’ll encounter in Legends are specifically designed to invite coordination. Soul-Linked enemies must be defeated at the same time, or they’ll come back to life. Enemies with Attuned armor can be defeated more quickly if they’re first damaged by a player with a matching Attuned sword, or a shot from a Spirit Bow. Even the encounter design contributes- it feels great to sneak up together on two unsuspecting enemies and take them both down before they even know you are there. 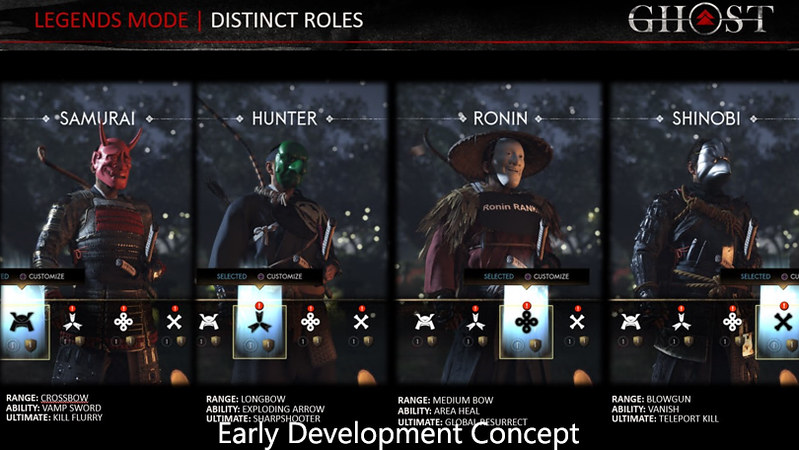 One of our earliest mock-ups of potential classes

We always planned on having Hero Classes to help enable cooperation, but the mechanical depth and cosmetic style evolved over time. Our first pass at Gear was more like the single-player systems in Ghost. As the mode grew, we decided to switch to a loot-based system, which was a better fit for the replayable gameplay we were building. We also added class-specific tech trees, unique Ultimate moves, and signature gear items. With each addition, the classes and their gameplay styles became more distinguished and engaging.

Hero classes originally had no distinct visuals except for the mask they wore and the class icon over their head. Players weren’t able to distinguish them, so we made a big shift to allocate specific cosmetic sets to specific classes. Later, we also added class-specific voice acting to help give them more character.

The visual style for Legends was undefined for a long time- most of it was implemented during the last 9 months of development. Our earliest breakthrough was the concept art for the main villain, Iyo. We had requested some villain sketches, and the concept team created two very different but very awesome variants- a pristine, elegant, but unsettling human-scale woman, and a giant, building-size monster in a terrifying mask. Both variants were so compelling that we decided to develop them into a two-form raid boss, which eventually became a visual touchstone for everything in Legends- from the Story Missions to the Raid world, and even the main title art.

Concept art of Iyo, our villain

This pattern was true of the Raid in general- it was a massive investment, but the benefits extended beyond the mission itself. We believed from the beginning of development that Legends needed a “North Star” for the players to work toward- something that would justify and reward all the effort they put into building up their gear and skill set. The Raid would be the most challenging experience for players, but it would also be the most cooperative. For Story and Survival missions, the cooperative mechanics are mostly optional, but in the Raid we could completely put players’ lives in the hands of their allies. We described the Raid as “an escape room, but with enemies who are actively trying to kill you.”

The final boss battle came together very late- so late that we were afraid we might have to cut or delay it. But we knew it was vital to the macro of the game, so we redirected resources to make sure we could finish it, and it was definitely worth the effort. The final battle delivered on the cooperative experience we wanted, while also allowing players to challenge Iyo face to face.

A Spirit of Cooperation

We worked to build a cooperative experience within the game- but it’s been equally awesome to see the cooperative spirit that has grown in the community. Here are some of the highlights:

Free Rides: One player has been completing Survival Nightmare solo (which is mindblowing on its own), then activating matchmaking to bring in three random players as the mission completed so they would get instant rewards.

Helpful Allies: It’s common to see social media posts asking questions or requesting support, and to see a flood of players happy to give answers and to shepherd a player through challenging content as needed.

Silent Respect: I’ve personally played so many matches in 2-Player Story mode with a random player where we worked together throughout, completed the mission, and bowed in respect at the end. It’s a beautiful feeling, and is exactly what we wanted to enable from the beginning of the project.

It’s been an incredible challenge, but also an incredible privilege to be able to build Legends. The entire Sucker Punch team worked very hard to deliver on the vision, and we’re so happy that the content is now open to a wider audience. Thank you to everyone who has already played and to everyone giving it a try this month. Maybe we’ll even get matched into a game together soon!

It Cracks Anna Kendrick Up How Twilight Stars Went From Heartthrobs To ‘The Butt Of Every Joke’
The Marvel Rundown: Terminal antics in X-TERMINATORS #5
Kelsea Ballerini and Chase Stokes Hold Hands in Date Night Video
Miestone’s Heavyweight Super Heroes Clash in Icon vs. Hardware!
Emilia Clarke’s The Pod Generation Is A Clever Sci-Fi Satire About The Future Of Pregnancy