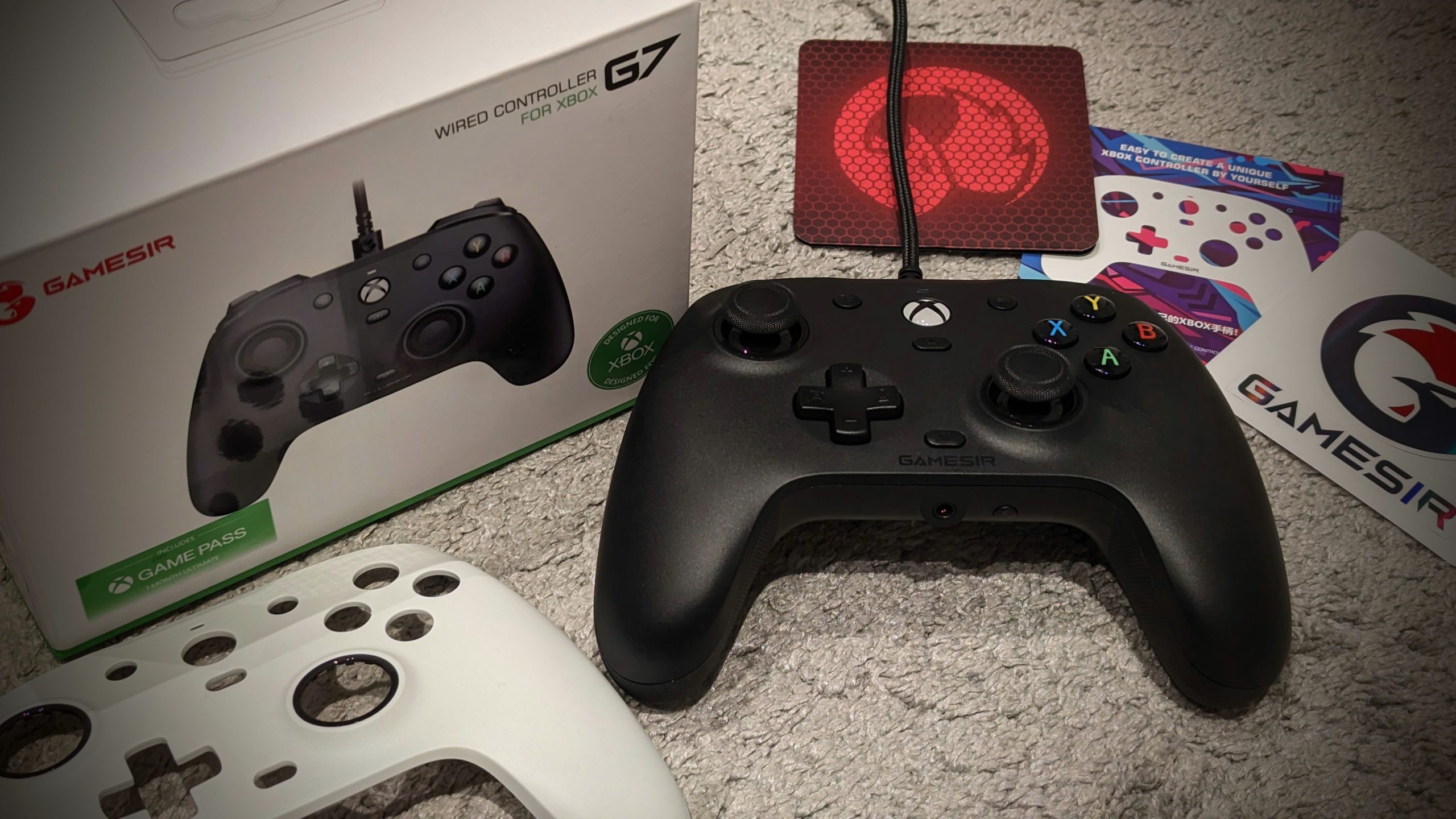 Even though the GameSir brand isn’t one that immediately springs out, it is one that has delivered the goods over the years. We’ve been hands-on with a number of their products, with them becoming one of the leads in the Cloud Gaming scene – we especially like the GameSir X2 Pro Gaming Controller as a way of immersing ourselves in the Game Pass scene.

But GameSir have big ideas and limiting themselves to mobile controllers probably won’t allow for the world domination they crave. It’s with that in which the GameSir G7 Controller, Designed for Xbox comes in.

A wired controller, the GameSir G7 is a rather noble take on the official Xbox controllers that have done the rounds for some time. This one doesn’t have the ease and accessibility of a wireless pad, requiring the player to have themselves connected to their Xbox console via a detachable 3-metre long braided USB-A to USB-C cable. If you can handle being tied down, you’ll be fine here.

From there, standard third-party controller vibes emit. This is your everyday wired Xbox controller, one that has all the usual Xbox buttons you would come to know and expect, mostly in their usual spots with only very slight variations on placements. A smidge smaller than an official Xbox pad, it weighs in just a little less too – some 224 grams for the G7 against 271 for the official wireless. Aside from that, to the general gamer, they’d struggle to tell the difference between the two.

That means you’ve got access to a couple of decent feeling thumbsticks, the usual face buttons (albeit feeling a tad smaller than the norm), a D-Pad, Nexus button (inverted black on white instead of white on black), View, Menu and Share buttons. If you know your way around an Xbox controller, you’ll be absolutely fine with the G7.

Texture and grip comes in too, with some roughness on the bumpers, the triggers and the hand grips themselves. We’d not say these are the most tactile of offerings, occasionally feeling a bit too rough to the touch (especially the bumpers), but they do the job in ensuring that you won’t slip off the G7 in the heat of battle. It all feels decent enough to action though, albeit a little spongy in button use, never wowing. Hidden in the G7 are quad rumble motors too and honestly, whether it be those hidden up in the triggers or down in the grips, we love the feel of them.

GameSir are wanting to do more than just replicate the official Xbox pad though and they’ve added to the D-Pad with what we can only describe as some Turtle Beach REACT-R -styled volume controls. An up, down, left or right press when in conjunction with an M button will ensure you can amend your game volumes on the fly, moving between game and party chat with ease. It’s a nice system, one that we’ve found to be a real help and means that rarely will you ever need to remove your hands from the controller when playing.

That idea is amplified by a mic mute button just to the right of the standard 3.5mm audio port too. Hitting up, it glows red to signify voice-out is kept under control. Again, keeping those hands firmly attached to the controller is GameSir’s aim.

Further are a couple of M1 and M2 back buttons, programmable to deliver the action of your choosing. Again these work with that M button in tow, pressed and programmed with ease. We find these back buttons to be extremely helpful in the best simulation racers, those games which require quick gear shifting, but individuals will find a best use case for themselves. It’s neat then that by downloading and installing the GameSir Nexus App it’s possible to set a few different player profiles. Adjusting triggers and sticks, playing with deadzones, button mappings and wotnot can also be taken in.

So far, and even with some neat features, it’s all pretty standard. In fact, the GameSir G7 Controller, Designed for Xbox doesn’t really do anything new, aside from the fact that a weird little quirk is that it comes with a couple of different faceplates. Out of the box, you’ll have access to an all-black affair, but getting your fingernails under the faceplate will allow you to prise it free from six small magnets, replacing that black upper with a white alternative. It doesn’t look as good as an all-white official Xbox controller, but there’s something oddly satisfying about a white on black G7. Even more unique is that the uppers are both amendable and customisable if you have access to a paint marker – yep, there is absolutely nothing wrong with drawing all over your Xbox controller. GameSir want you to do just that. If anything, that makes the G7 totally unique.

Aside from that though, you shouldn’t expect any game-changing moments to come about via the GameSir G7 Controller, Designed for Xbox. It’s certainly a well put together pad and will be of appeal to those looking for a cheaper alternative to an official Xbox product – the sub-£50 asking price makes it all the more tempting. You’ll need to be aware of the need to cable in for any use and the removable, paintable faceplates are a nice gimmick, but we’d still go for something a bit beefier for our most intense gaming sessions.

And unfortunately for GameSir, there are a ton of alternatives to the Xbox Elite Controller that blow this one out of the water.

Huge thanks go out to GameSir for providing the G7 Controller for review. You can grab one from GameSir direct, or via the likes of Amazon, for around £49.99.

TheXboxHub may receive a small commission if you use our Amazon link.