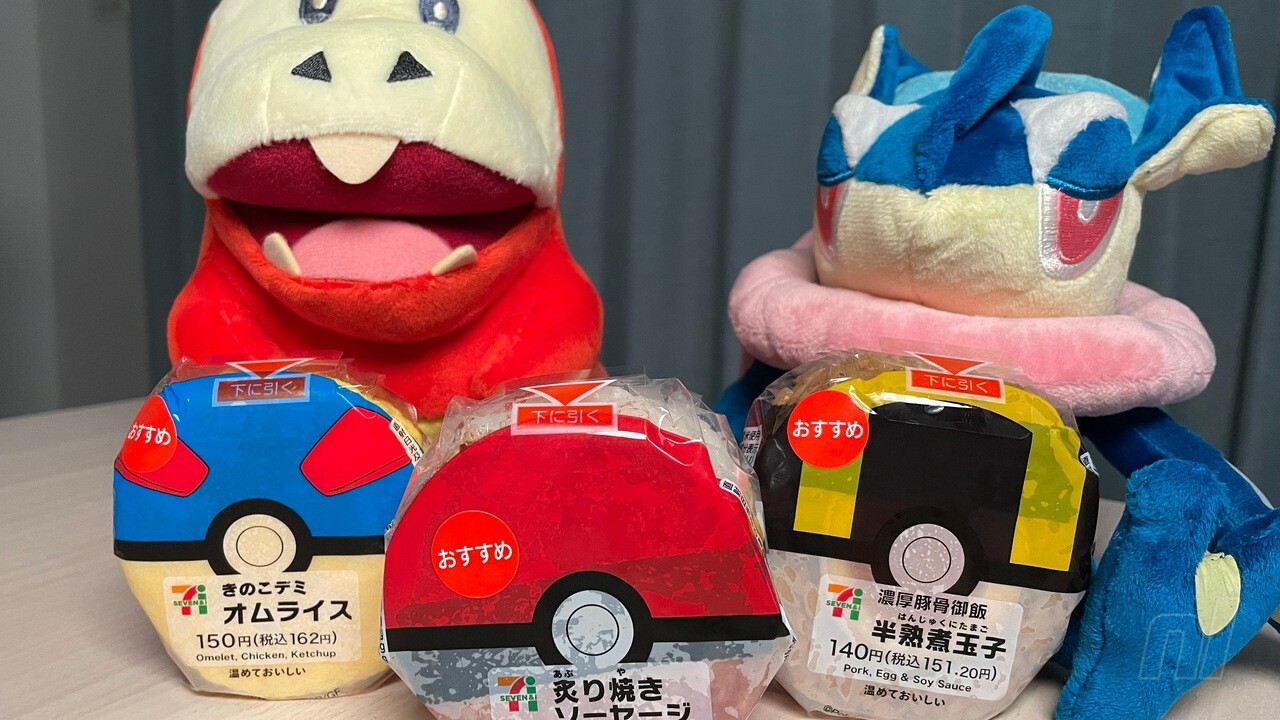 Pokémon – both the games and the anime – have always featured food prominently. Moomoo milk, sodapops, slowpoke tails, and more recently curry mixes and sandwiches – there’s no end to the edible and drinkable in the Pokéworld.

We’ve even covered Pokéfood before on Nintendo Life, both reviewing Japan-exclusive actual donuts and ranking the ‘mons we’d find the tastiest. Those ancient Pokémon fans among us might even recall that during Ash, Brock, and Misty’s early adventures, they often dined on what they called donuts. These white-and-black triangle-shaped pastries were actually rice balls — onigiri — dubbed ‘donuts’ in the English version of the show as kids presumably wouldn’t know onigiri from fried dough.

We’ve now come full circle with Poké Ball onigiri released by 7-Eleven Japan to commemorate Pokémon Scarlet and Violet. Yes, these are real rice balls and not donuts, and we managed to snag one of each flavour before the noontime rush scooped them all up (onigiri sells out quickly no matter where in Japan you are).

And much like we did with the Pokémon donuts, we’ve gone ahead and reviewed all three flavours: Pokéball, Great Ball, and Ultra Ball.

We, of course, must begin with the ball that started it all… 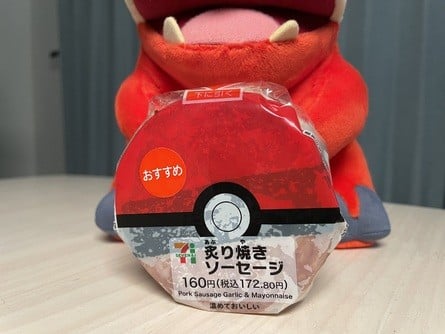 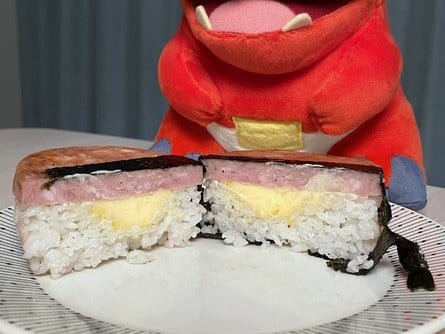 This red-and-white original comes with roasted pork, garlic, and mayonnaise.

Of all three balls, this was the hardest to eat…the sausage slab slid off the rice and we were forced to eat them separately

As you can see in the photographs, the Pokéball design consists of the outer plastic wrapping only. Beneath, the spherical onigiri loosely resembles what we used to catch our first Caterpies and Weedles. Still, the colour of the pork and the dark band of seaweed invoke the image of a Poké Ball. As seen in the cross-section, the chefs at 7-Eleven sandwiched a dollop of mayonnaise between the rice and meat.

Before we bit in, we questioned where this pork came from. With Scarlet and Violet’s release, perhaps this sausage was made from a Lechonk, or maybe the chefs pulled from Pokémon’s past to fillet a different pig-themed Pokémon such as Tepig. They neglected to specify which Pokémon we’re feasting on, though we’re sure they all taste somewhat the same anyway.

Of all three balls, this was the hardest to eat. Immediately after taking a bite, the sausage slab slid off the rice and we were forced to eat them separately as if it were an unfinished Lechonk fried rice dish. That said, the Lechonk slice was quite tasty, if a little salty, despite the onigiri costing only 172 yen from a convenience store. The band of seaweed, or nori, and the rice itself we enjoyed as they were quite fresh.

However, as we admittedly do not like Japanese mayonnaise, the little blob in the middle turned us off the whole package. It overpowered any hint of garlic like a Dragonite using Hyper Beam on a Pidgey, leaving us overall disappointed with the original Poké Ball. 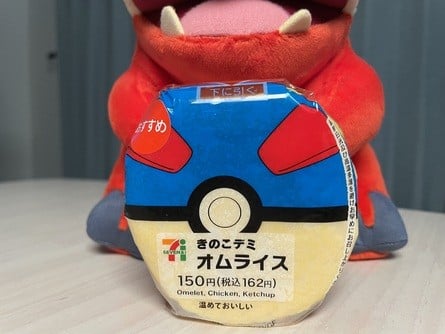 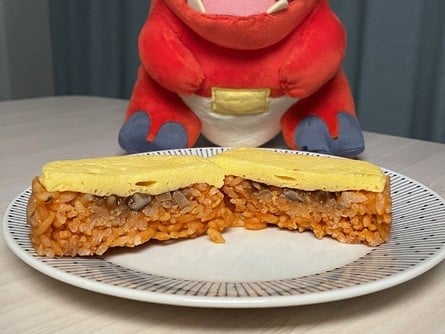 The blue and red Great Ball takes the popular Japanese dish of omelette rice and compresses it down into a compact rice/Pokéball form.

While the omelette itself lacked any fluffy butteriness, the rice had a spicy little zing to it that made up for the egg

Omelette rice – or omurice – typically sees fried rice wrapped in a thin omelette before being topped with ketchup. In this form, a somewhat thick layer of omelette tops the onigiri, and instead of being drizzled with ketchup, the chefs mixed the ketchup into the rice itself. Within, a mushroom and chicken blend awaits hungry Pokémon fans and Japanese businessmen that wanted to spice up their convenience store lunch a little.

Much like the Poké Ball, we wondered from which Pokémon the eggs came – was it a Togepi? Or a chicken-like Pokémon such as Torchic? Who can say? What we can tell you, however, is that the mushroom inside definitely reminded us of Amoonguss. Or maybe it was Shiinotic.

We digress. We enjoyed this onigiri more than the first because the omelette on top stayed put. Eating it by hand, as Arceus intended of all onigiri, was a much more pleasant experience. While the omelette itself lacked any fluffy butteriness, giving it both bland taste and texture, the rice had a spicy little zing to it that made up for the egg – and no, it didn’t taste strictly of ketchup.

The Amoonguss and Torchic mixture, however, combines for a strange, mushy mixture that we could’ve done without. In fact, we weren’t certain if any Torchic was present. Admittedly, we’re not big mushroom fans. 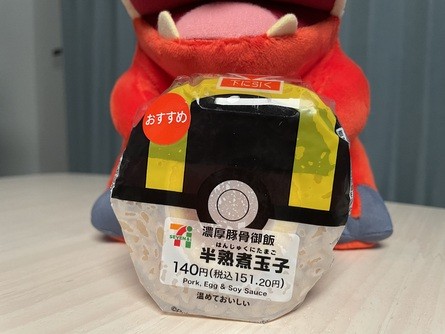 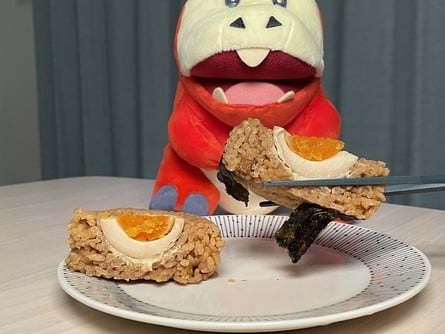 Much like in the actual games, the Ultra Ball captured our taste buds the easiest. A combination of pork (Grumpig?), a medium-boiled egg (Happiny?), and soy sauce doesn’t seem that special when compared to the other two, but it all comes together to create a much more savoury onigiri.

If you squint, the half of a boiled egg in the centre could represent the Ultra Ball’s release button, or perhaps a Pokémon itself. A band of seaweed envelopes the top half to symbolise the black design of an Ultra Ball. Other than this, it thematically has little to do with its packaging, and of the three we’d argue looks the least appetising.

Sometimes, simplicity wins the day. The half of an egg in the centre was cooked well, being neither dry nor runny, though we wanted a pinch of salt to sprinkle on it. The seaweed provided a slightly crunchy texture with an aromatic taste. But it was the rice itself, mixed together with soy sauce and chunks of Grumpig, that resulted in our taste buds being critically captured.

It was, in fact, not too far gone from a regular old fried rice ball – our personal favourite. Of the three, we wouldn’t hesitate to purchase the Ultra Ball onigiri once again.

Hungry for some rice balls? If you had the chance to pop into a Japanese 7-Eleven, which of these onigiri balls would you want to eat most – if at all? Be sure to let us know in the comments!