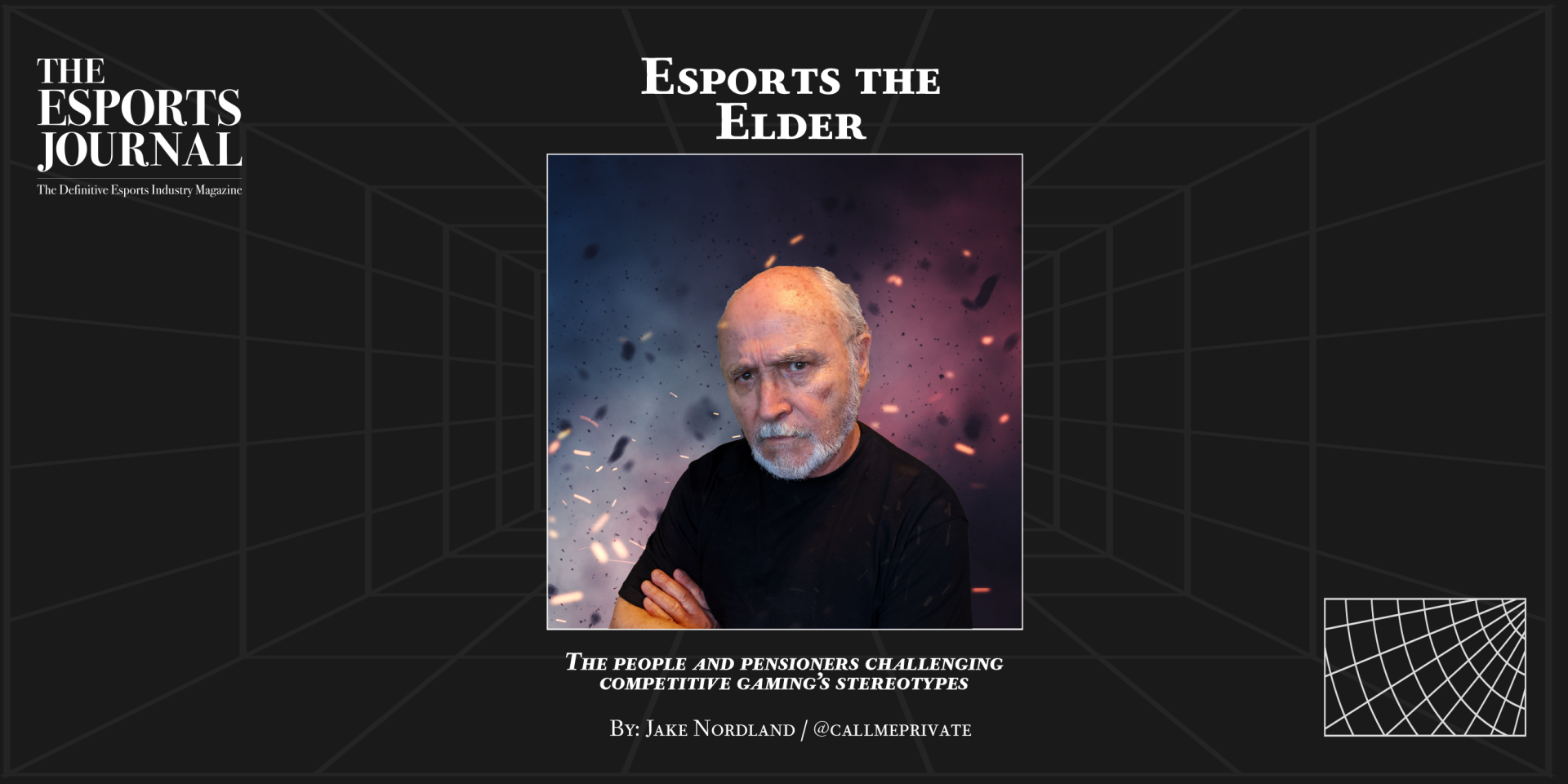 Ask any marketing professional working in esports and they’ll boast about the industry’s valuable young, tech-savvy, Gen Z audience. It’s a defining narrative in the esports industry and a largely unchallenged truth that esports is young, hip, and rich in the cultural currency of younger generations.

The esports audience is one that is stereotyped from all angles — by fans, players, even business owners — a product of the fact that traditionally, esports’ young, notoriously hard-to-reach demographic has been one of the industry’s biggest commercial selling points.

However, such reductions might not reflect the reality of esports in 2022, now a proven global phenomenon counting over 500 million fans. Esports already is much more diverse than the clichés personify — and it may just pay to accept that.

David Drake, Founder and Chairman of New York-based family office LDJ Capital, doesn’t really game. It’s his father, Abbe ‘DieHardBirdie’ Borg, the 79 year-old captain of all-senior esports team Golden Snipers, who does most of the gaming in the family.

“I was shocked when he showed me a picture with a trophy on his lap in 2019 in a text message,” Drake told The Esports Journal, traces of surprise still obvious in his voice. “I was like, ‘what!?’, I had no idea he was at that level.”

“He’s gaming every day now. That’s kind of just his way of relaxing. He games a couple times, goes onto his Twitch account and creates videos, which we taught him how to do. He does it every day, that’s just part of his routine.”

In 2019, Borg and his team won a championship title in the Senior CS:GO World Cup, held live at DreamHack Summer 2019 — and sponsored by peripherals brand Lenovo. For the world’s oldest senior esports champion, it isn’t really about winning or losing; he’s more interested in the benefits competitive gaming offers his generation.

“It’s fantastic because I know that he’s exercising his mind and hand-eye coordination,” Drake continued. “It’s a safety net knowing that he’s always on the top of his game, pun intended, mentally, and physically with his hand.”

RELATED: Dabbling in Dribble: How EVOS went from esports to basketball

A growing number of senior citizens are participating in gaming — seemingly obvious, in hindsight, considering it’s as physically taxing as sitting on a coach. Today, 42 percent of Baby Boomers actively play some sort of video game, according to research by gaming and esports research firm Newzoo. One in three seniors started gaming during the pandemic alone, found Stannah, a stairlift brand.

Additional research has shown that seniors who play video games report better overall emotional well-being, reaction time and short-term memory. Little research has been done into the health benefits of esports for senior citizens — but it’s easy to see the appeal.

“I think it’s indisputable that there are health benefits,” Drake said. “It keeps your mind exercised and active. Gaming gives a sense of accomplishment, acuity, mental health, exercise, and all of that is tremendously helpful for all ages.”

With social interaction curtailed by the long bouts at home necessitated by COVID-19, loneliness and boredom were particularly acute amongst older generations. Zoom and FaceTime kept minds sane, but for some, gaming proved the best recourse for isolation.

“Anyone who plays CS:GO at the age of 63 is a person of the 21st century,” ‘Oleg’, a NaVi fan and part of Ukrainian senior team (and Golden Snipers rival) Ageless Shooters, told Youtuber TUT.BY, per a translation by AFK Gaming. “The game and this age are absolutely compatible. It’s a link between generations.”

For Drake, that compatibility is obvious. It’s always been the case — you do gaming to stay in touch with friends, keep your mind busy, and disconnect from challenges and problems in life. Why wouldn’t that extend to seniors?

Brandon Sivret is the CEO of Original Gamer Life (OGL), a gaming community hub targeted at senior citizens and military personnel. OGL acts as a community and ‘social impact’ platform, providing a toxicity-free environment for its non-typical gamers. DieHardBirdie was named as an ambassador for OGL in November 2021.

“It really did start with DieHardBirdie with his background and everything,” Sivret said. “This idea that games can be therapeutic, physically, mentally and emotionally. It grew from this focus on esports into a whole community.”

That community is needed because of prevailing misconceptions around who gaming and esports are for. “Esports is seen as a younger person’s sport, but really I’ve been doing it my entire life,” Sivret said, with a hint of nostalgia.

“My age group, we’re kind of growing into — I hate to say it [laughs] but — these older age brackets, and we still love to play competitively, I still like to join tournaments and things. It’s about staying connected to others, still gaming with friends and family.”

As a former US Air Force Major,  Intelligence Officer, and game developer, Sivret used gaming to unwind and connect with family while deployed — though finding internet in rural Afghanistan was a challenge.

For an older generation of gamers, like Sivret, there’s an appetite for esports, but ingrained stereotypes mean the elderly are missing out on its potential benefits. Senior teams are the exception, not the rule: trailblazing attempts to reclaim gaming by the generation that invented it. The interest is there, but to go mainstream they must contend with a world in which the very word ‘boomer’ is itself wielded as an insult.

“You look at the mainstream tournaments and leagues and everything is for the younger generation,” Sivret opined. “Even some of the esports promoters and management staff comment on how you basically get aged out in your 20s. It’s prevalent.”

According to Drake and Sivret, this isn’t just a missed opportunity: it’s an untapped market. At the end of the day, while the young portion of esports’ audience holds value, it’s equally difficult to monetise. Emphasis often rides on reaching esports’ young audience to build brand awareness for the future, but what if you could reach a generation that already has ample disposable income and leisure time?

Drake said: “We’ve talked to financial ETF investment groups that want to get to a senior audience because they have more disposable income and more capital. And they love that idea because they can get to people… that don’t have any kids at home.”

For Sivret, creating OGL was an opportunity to offer a valuable service to senior citizens — a vehicle for combatting the social problems of an ageing population — but it also makes business sense. As a game developer, he knows that’s a rare crossover. “With Environmental, Social, and Governance (ESG) becoming a big part of how businesses are redefining themselves, I think there’s an opportunity to really try to tackle both.”

Senior esports is still profoundly niche, to be sure. DieHardBirdie’s Golden Snipers, Ukraine’s Young Guard and Japan’s Matagi Snipers are some the firsts of its kind. Nevertheless, the benefits are there, and the interest arguably is too.

“Our struggle has been, who’s the financial sponsor, who’s the one who gets it and wants to support this and that we haven’t been able to figure out yet,” Drake said, arguing ‘they’ — the esports industry — ought to tackle the issue.

“They see the opportunity there. The infrastructure is just not in place yet.”

This article first appeared in The Esports Journal Edition 10 (page 40). Read the rest of Edition 10 for free using the embed below, or at theesportsjournal.news