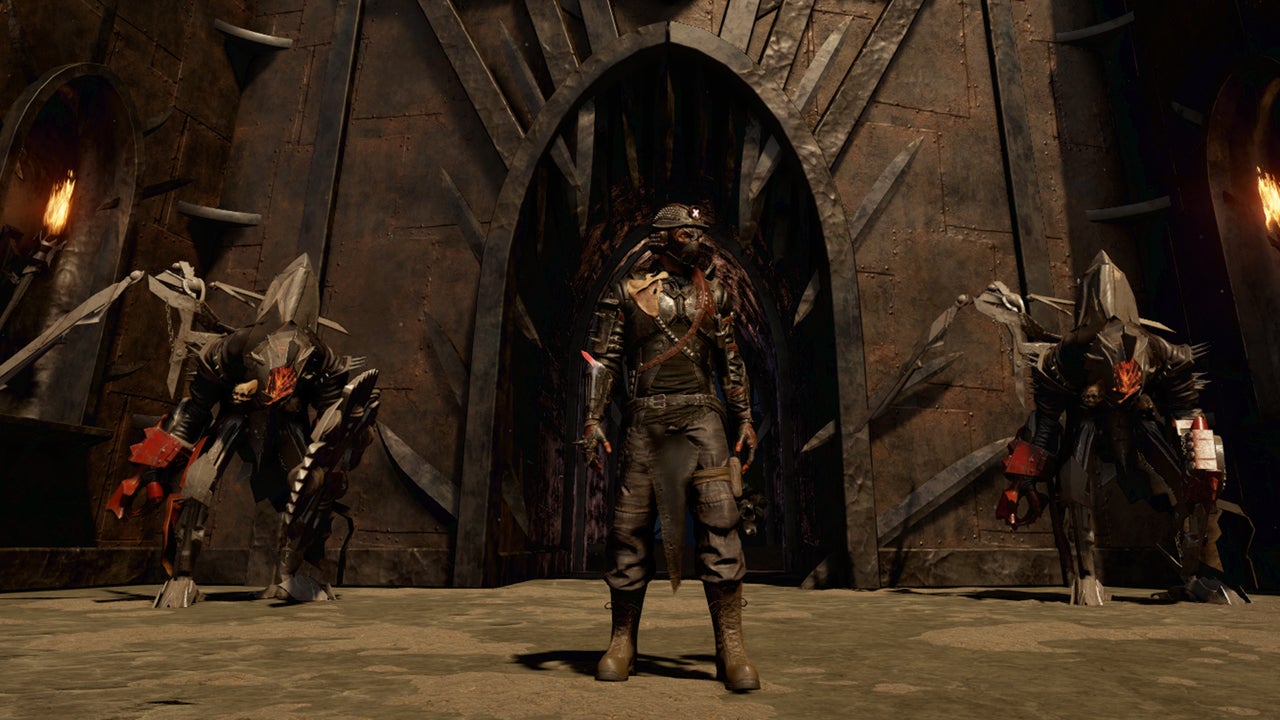 It’s been a while since we checked in with the inventive sci-fi world of Magalan and its standard-issue bald video game protagonist Jax in 2017, and while the landscape has changed, a lot has stayed the same. I wish more had changed, to be honest, because the hold-overs from the original Elex are most of what makes Elex 2 a disappointment. Underwhelming and sometimes confusing character writing undermines an interesting main quest scenario, graphical glitches sabotage an often beautiful post-apocalyptic world, and straight-up terrible combat tears down everything else.

I’ll get this out of the way right up front: I can’t think of anything positive to say about the combat, and that makes it very hard to recommend Elex 2 in spite of anything else it gets right. It feels clunky, imprecise, and annoying. The hitboxes are ridiculous. Many enemies repeat these glacial, downright silly attack animations where it’s almost impossible to tell when it’s actually dangerous to be standing near them. Jax, who has already saved the world once at this point, can still be killed in two hits by some random varmint along the side of the road. They do at least provide helpful skull icons on each foe’s health bar this time to let you know when you’re fighting something that is currently out of your league, so I had fair warning that whatever stray rodent just murdered me is meant to be a certified badass.

Combat in Elex 2 is not bad because it’s too challenging – take that from someone who’s currently loving Elden Ring. It’s just badly designed. The poorly-balanced stamina system makes it difficult to smoothly transition between attacking, defending, and maneuvering, even after you upgrade your stamina regeneration much later on. This creates an almost turn-based feel, and not in a good way. I attack, then I stand back and watch the bad guy swing ponderously at the air, then I get to run back in and attack again. Standing your ground usually gets you killed, since even basic enemies are flush with hitpoints and it takes Jax dozens of levels to feel more robust than a wet sheet of paper. Much like the original Elex, the scarcity of ammo and mana potions makes it very difficult to go for a pure ranged build – though being able to craft your own ammo helps a bit. On top of that, there are too few effective options when you’re getting ganged up on in melee.

Shields are all but useless until much later on, with some of the early ones only allowing you to take three direct hits instead of two. I often had to farm money for potions to get through tough encounters, which is a drag. The one thing that’s been improved from its predecessor’s combat system is that you don’t have a lot of encounters where you’ll get 360 noscoped by a firing squad offscreen, thus being forced to kite melee troops around a cliff for ages to break their line of sight. So that’s nice.

What We Said About ELEX

The best-case scenario for ELEX is that it’ll be worth picking up on sale a year or two from now after it’s been heavily patched to fix its rampant bugs and infuriating balance problems. It has enough good ideas that one day it might be talked about as one of those hidden RPG gems that people play and wonder why it wasn’t successful at launch. But the frothy mix of joy and frustration that ELEX presents today skews too heavily toward the latter. I wish it well, but I don’t think I’ll be calling it up for a second date.” – Leana Hafer, October 19, 2017

The reason this is especially disappointing is that I’ve seen other studios who make these kinds of hardcore, Euro-style RPGs improve tremendously in recent years without losing the things that make this subgenre unique. The Witcher 2, as much nostalgia as people have for it, also had a terrible combat system – but CD Projekt Red fixed it up with grace and fluidity for The Witcher 3. The Technomancer, from Spiders, also had abysmal combat. But its next game, GreedFall, was a huge step in the right direction that tightened up hitboxes and attack windows, fixed enemy tuning, and provided more interesting defensive options. We live in a world of “Post-Eurojank” RPGs, and yet it seems like Elex’s developer, Piranha Bytes is the one studio in this wheelhouse that still hasn’t caught up.

Don’t get me wrong: there are things worth preserving about that era of RPGs. But many of the ideas Elex 2 seems determined to hold onto are not among them. Why do I need an animation of my character bending down to pick up every single lootable item in the world? Why does every quest need to involve being sent on an errand that will inevitably involve being given another errand by a third party, as if they’re just trying to stall for time? Why do I have to convince an overseer to give her workers a raise, run across town to tell them about that raise, then run all the way back to tell the overseer the workers are satisfied? There are so many little bits of archaic design clinging to everything that feel like getting something stuck in your sock if you’ve played any other modern RPG recently.

While it’s by far the largest, combat is not the only problem here. A decent chunk of the dialogue ranges from fine to good, but certain characters often sound like they were written by aliens. They’ll say and do things that don’t make any sense. They’ll spit out one-liners that make me cringe so hard my face hurts. “Hey! C-can I go now?” says a frightened prisoner on a recording I found in some ruins. “Oh, yeah, sure,” his captor responds. “You can go… Go crawl up your own ass, you dipshit!” I spit coffee all over my screen, and I didn’t get a sense that this was intended to be so bad it’s funny. At least the writing can be quite entertaining at times, in a schlocky B-movie way.

And then there are mind-boggling failures of logic, like the fact that you can’t get into the main Berserker settlement without running a few small errands even if you are accompanied by Caja, a high ranking Berserker Warlord and the mother of your child. If you ask her why she can’t just vouch for you, she says something about avoiding rumors – a line of dialogue I’m pretty sure was directly lifted from a completely different conversation. It’s like the idea of bringing her along as a companion was added later in development, and they didn’t want to let you skip any pointless busywork quests so they had to jerry rig an explanation.

Certain characters often sound like they were written by aliens.

It gets worse than that. At one point I raided an underground base full of enemy spies who were working against the faction I was trying to join. I chose to kill them all, which you’re allowed to do. That was cool. But somehow, someone reported this as a crime, even though it took place two stories underground with no witnesses and the blessing – nay, encouragement! – of the authorities. Hilariously, I had to pay a fine to the exact same guy who paid me a bounty for taking them out. This kind of thing happens regularly.

Eye of the Beholder

Magalan sure looks nice, when there aren’t weird glitches and distracting pop-in happening, which seemed to get worse if I was alt-tabbing a lot on PC. It’s roughly the same setting as the original Elex, but a lot has changed in interesting and dynamic ways. Elex’s Berserker ending has been made canon, and as such the central desert is now blooming with new life thanks to the post-apocalyptic medieval druid LARPers and their magic world seeds. Most of the Mad Max-esque Outlaws faction has been absorbed by the Berserkers, creating new styles of architecture and fashion that mix pelts and amber necklaces with scrap and old car tires. If you didn’t play the original, some of these changes might be lost on you, but Elex 2 does a decent job of bringing you up to speed most of the time.

I really liked all of this clever worldbuilding. It was interesting finding out what a lot of characters, like the femme fatale Outlaw, Nasty, or the mistrusted Albs, the bad guys from the first Elex, had gotten up to since I last saw them. And the new factions, particularly the death-worshiping Morkons, have interesting ideals and aesthetics of their own. The new threat, the alien Skyands, also come sporting some very unique and downright cool designs for their soldiers and beasts of war, and a few unexpected secrets. I just wish I liked the gameplay enough that I could appreciate them without constantly being annoyed.

The big, shiny, new toy you get to play with in Elex 2 is an upgradeable jetpack. And I’ll admit, taking it from the modest utility it was in the first Elex to something you can eventually supe up and use to fly around like Iron Man, is fun and rewarding. It just doesn’t make up for the fact that the other progression systems are yoked to an obnoxious combat system that becomes marginally more tolerable the more skill points you throw at it, but it never crosses the line into being fun. Exploring this world can be great, right up to the point where you have to fight anything or speak to anybody.

Jennifer Coolidge Is Hasty Pudding’s 2023 Woman of the Year
Anna Faris Signs With CAA
Austin Butler On ‘Bittersweet’ Oscar Nomination After Lisa Marie Presley’s Death
Complaints about Cyberpunk 2077 being too linear are ‘completely justified’ says quest director
Star Wars: The Bad Batch — Are the Ancients Tied to the Jedi?