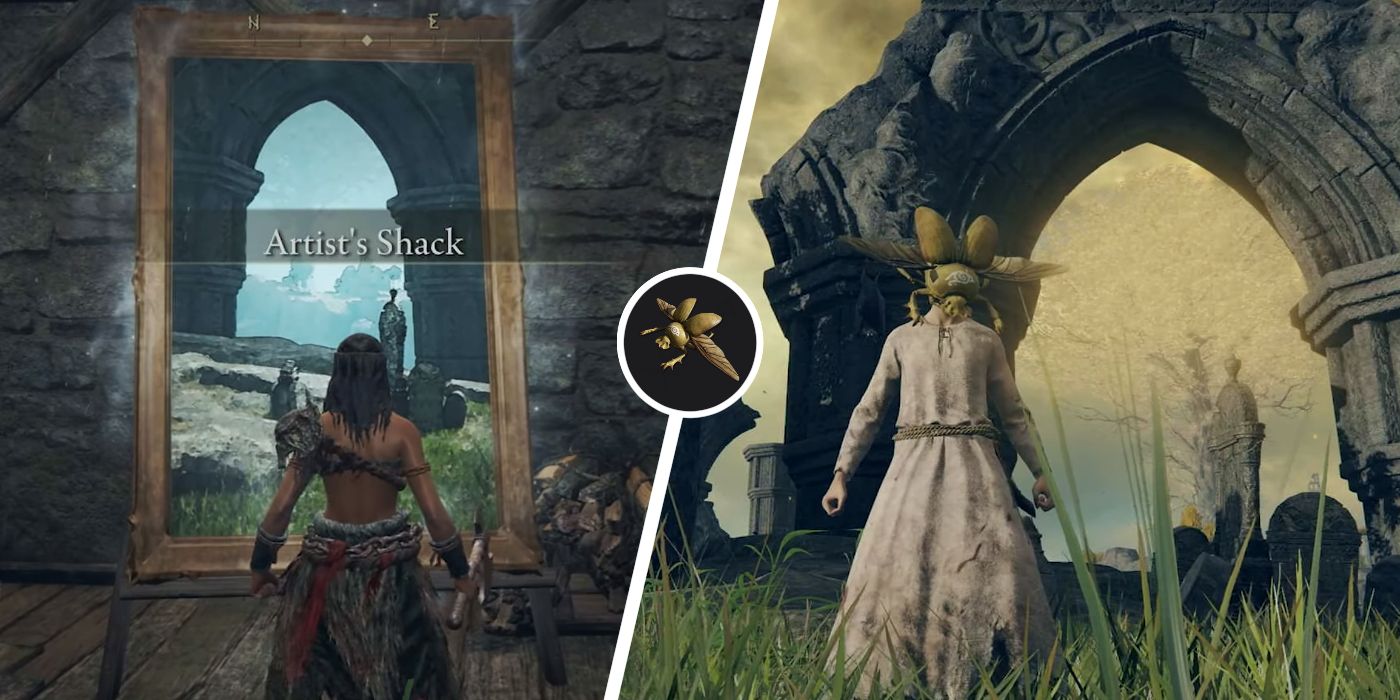 The Incantation Scarab is a helmet in Elden Ring that functions similarly to the Glintstone Scarab, but instead of reducing the FP cost for Sorceries, the headpiece lowers mana consumption for Incantations. However, this buff comes at the price of reduced damage negation, resulting in more damage received from enemies. Still, adventurers skilled in dodge-rolling and avoiding attacks will find great utility for this Spell-related helm in Elden Ring.

To acquire the Incantation Scarab, travelers must first examine and solve the puzzle of the Homing Instinct Painting within the Artist’s Shack. The shack’s location is in northeastern Limgrave, on the eastern side of the river from Lake Agheel. Tarnished can reach the Artist’s Shack by traveling north from the Church of Elleh and riding eastward from the Gatefront Ruins. Then, head north after crossing the footbridge, taking the off-road path to the hut. After arriving, the player can interact with the painting to spawn the Incantation Scarab.

The Incantation Scarab is located in the area below Lake Agheel, southwest of the Dragon Burnt Ruins in Elden Ring. Tarnished can easily reach this location by fast traveling to The First Step Site of Grace and going directly east. Be mindful of the Giants Bats while wandering through the rugged terrain.

Look for a group of tombstones next to a large collapsed arch. The Homing Instinct Painting ghost artist will briefly appear before vanishing in the wind, leaving behind Incantation Scarab. As mentioned above, the scarab helmet will increase the amount of damage taken from foes. As a result, low-level Faith Spell users who wish to wear this unique-looking headpiece are recommended to equip a defensive build to mitigate the loss of defensive stats. It should be further noted that some in the Elden Ring community have mentioned the Incantation Scarab is bugged and does not decrease the FP cost of Spells. While this dilemma may not be the case for all Tarnished, it is a necessary detail to consider and inspect.

Travelers who have yet to explore much of the world may not find much use for the Incantation Scarab due to the lack of usable Incantations. Luckily, once the player has progressed enough through the world, either by traveling to several Sites of Grace or defeating Margit, Melina will visit the protagonist and teleport them to the Roundtable Hold. Within this hub location, Tarnished can purchase new Faith Spells from Brother Corhyn, allowing the Incantation Scarab to become a more practical equipment piece in Elden Ring.

Next: Elden Ring: How To Cure Scarlet Rot

Ethan is an American from California and holds a double-major degree in Business Admin. and Media & Comm. While adept in writing a variety of articles, he currently focuses on writing game guides for Screen Rant. He has a lifelong purpose of conquering his Steam backlog someday.

Jeffrey Dahmer’s Prison Glasses For Sale At $150k
Grey’s Anatomy: 4 Times ABC Baited Us Into Watching Station 19
NYCC ’22: AMC+’s MAYFAIR WITCHES Looks To Be A Spellbinding Follow Up to INTERVIEW WITH THE VAMPIRE
Sonic Frontiers is getting some Sonic Adventure 2-themed DLC
Johnny Depp’s Lawyers Got Some Of The Best Seats In The House At Recent Concert After Defamation Wins