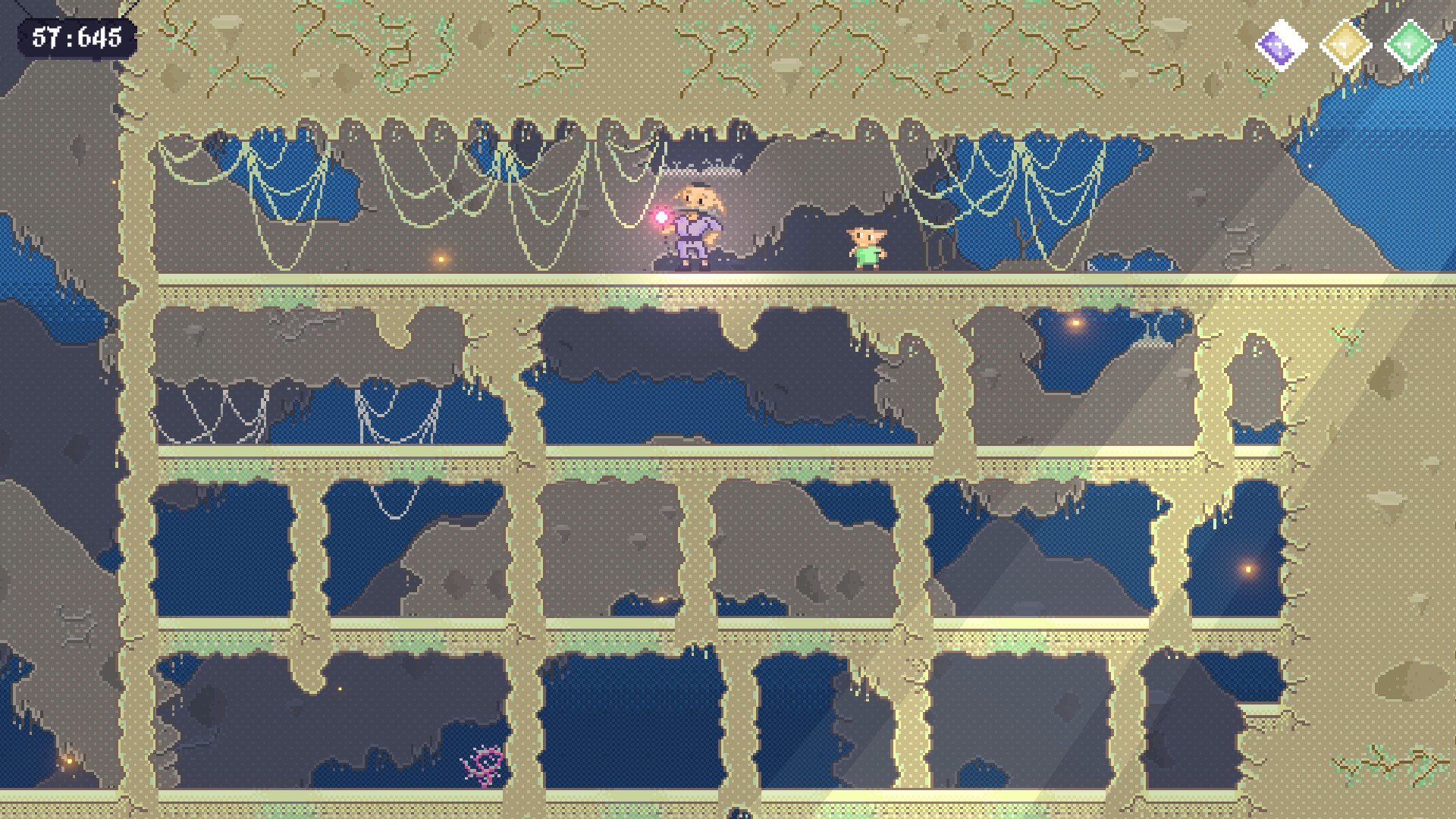 When code for Dobo’s Heroes came into TheXboxHub Towers, there was only ever going to be one man for the job. His nickname is Dobo, his Gamertag begins Dobo, it’s even in his Twitter handle. Step forward: Me.

In a far-off land, a man named Dobo is the hero people have needed. In his aging years however, he has become a bit of a recluse, locking himself away quite literally. To improve his mental health, his grandchildren take it upon themselves to bring him out of his dark hole and get him back outside where he is at his happiest.

His grandkids have inherited some of his powers as well it would seem, and their powers are suited perfectly for a 2D puzzle platformer. Each one has the ability to temporarily transform themselves into a platform to aid Dobo to find the portal in each level. In his aging years, Dobo cannot jump all that high, so some assistance is greatly appreciated.

In each of the forty-five levels, Dobo will need to find the portal in order to progress to the next one. There are hidden areas and books to find, but they’re not too far off the beaten track. The books provide an insight into the life of Dobo from his nearest and dearest and, to be honest, is far more exposition than we were expecting.

The main emphasis however is on finding the optimum path to the portal using his grandkids.

You start off with just the one – they have names, but Dobo’s mind isn’t what it used to be and he can’t remember them – and things start relatively simple enough. As you progress, more grandkids join, and each one acts a little differently. Whilst all can act as a platform, later ones can work as launch pads, or break the ground to find new areas. The latter levels will test your mind as each grandkid will have a specific function in the level, but it may not be immediately apparent. There can be some tricky moments if you aren’t prepared to think a bit more laterally about the problems before you. The answer is always staring you in the face, but the workings will require some thinking.

And there is the fact that some of the middle sections will require some intricate platform placement and jumping in order to find the solution. And it was at these points Dobo did nearly rage quit. Having worked out the solution, being out by mere millimetres was hard work. Persevered I did though, and thankfully the later levels are much more forgiving whilst retaining some degree of difficulty.

To make things worse, the middle section is where the soundtrack for Dobo’s Heroes is at its most tedious too. The rest of it is pretty good; this middle section gets very repetitive.

Fortunately, for the most part, it fits in rather well with the retro look and feel to Dobo’s Heroes. The lands themselves are a bit similar to one another, as the actual platforms you are navigating around do not change appearance once. But the backgrounds do try and mix things up as you progress between tranches of levels.

Dobo’s Heroes should only take a few hours to complete, so providing you find all the collectibles, there is an easy 1000G on offer. But there is a weird quirk in place and every time you earn an achievement out pops the sign-in screen on the left-hand side. It doesn’t sign you out, but it does require you to confirm it is you still playing. It gives a weird Inception-like moment: Yes this is still me, Dobo, playing as Dobo, the titular hero from Dobo’s Heroes.

But just who are Dobo’s Heroes. Well, aside from the Leeds United team circa 2001/2002, in-game, that is for you to find out. Could it be his grandkids that you also control, or the other characters referenced in the memory books found within the levels? Perhaps the ambiguity leaves it for you to decide.

I’m not sure why any kid would wish their superpower to be the ability to change into a platform and have every man and his dog jump up and down on them, but in the context of Dobo’s Heroes, it works. Your best time is tracked on each level and there is an online leaderboard to contend with should you be that way inclined. But if not, there is a pleasantly fun puzzle platformer found in Dobo’s Heroes – if you can see it through to the end, it will put a smile on your face.

Dobo’s Heroes is on the Xbox Store