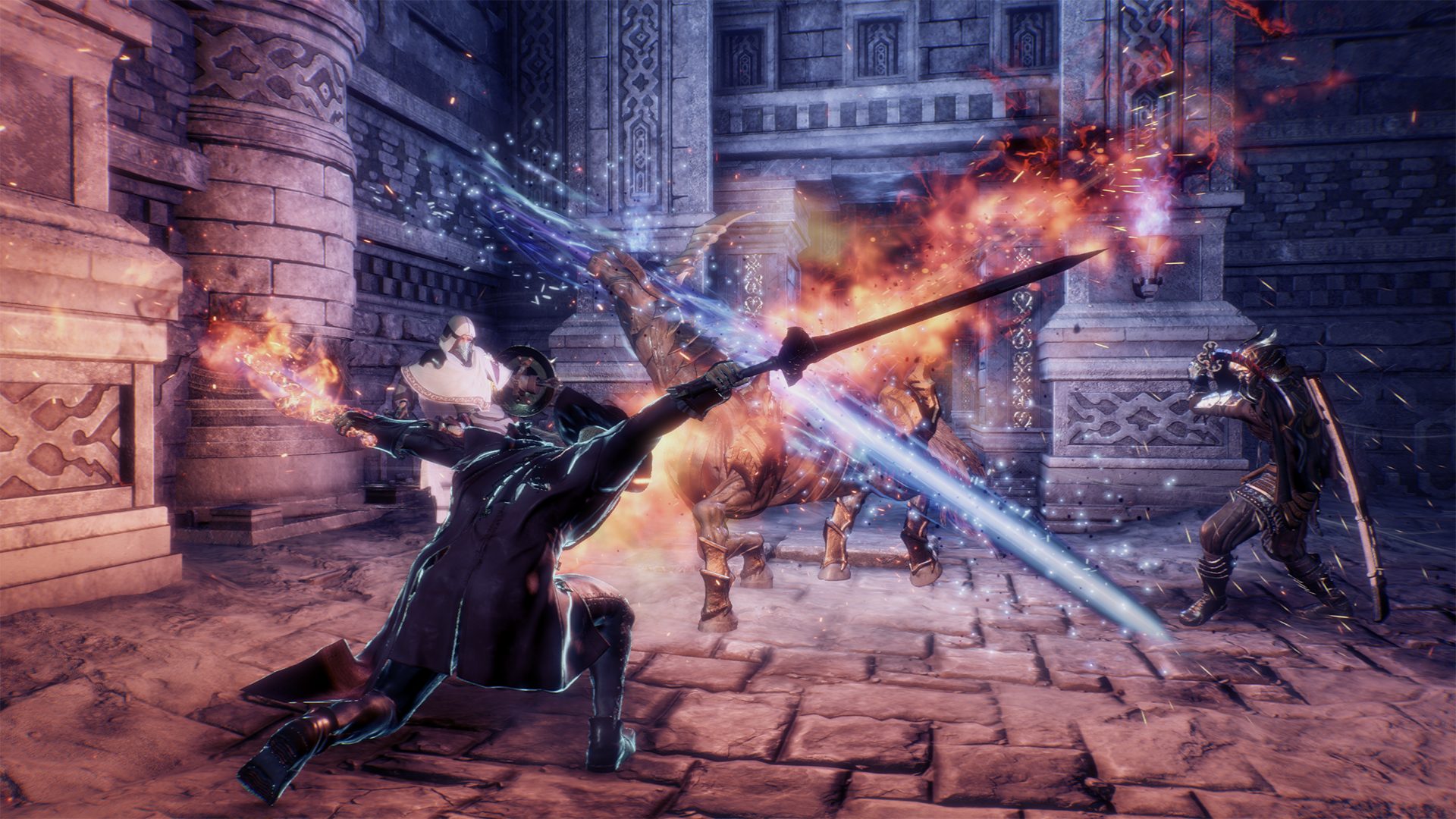 The release of Stranger of Paradise Final Fantasy Origin’s (SOPFFO) is just around the corner on March 18. For those who are too excited to wait, we’re pleased to announce that a free demo is available for download right now. Your save data will carry over to the full game once it’s out, but even better, this demo supports three-player co-op, so there’s no reason why you and two friends shouldn’t get a head start on the action-packed battles to come.

To get your blood pumping, we wanted to shed some new light on how multiplayer is handled in our game.

Kumabe-san: In SOPFFO, the host player will control Jack, and the guest players will control the two companion NPCs which the host selected ahead of time (between Ash, Jed, Neon, and Sophia). Jobs and equipment will not be restricted by character for your companions during multiplayer, allowing you and your friends to freely determine your ideal party composition.

To make multiplayer enjoyable for everyone involved, mission progress will carry over for all players. Furthermore, the MP from performing Soul Burst on enemies, gear dropped by enemies and experience points earned will all carry over to each individual player, ensuring once the multiplayer session is over, everyone leaves feeling rewarded for their efforts.

Inoue-san: Our in-world explanation for the multiplayer system is that your friends are sort of like Garland’s thoughts from a parallel world who are coming to save Jack in the host player’s world. Teamwork is a big theme for SOPFFO, so even with more utilitarian systems like multiplayer, we were keen to have a lore-based approach, too. 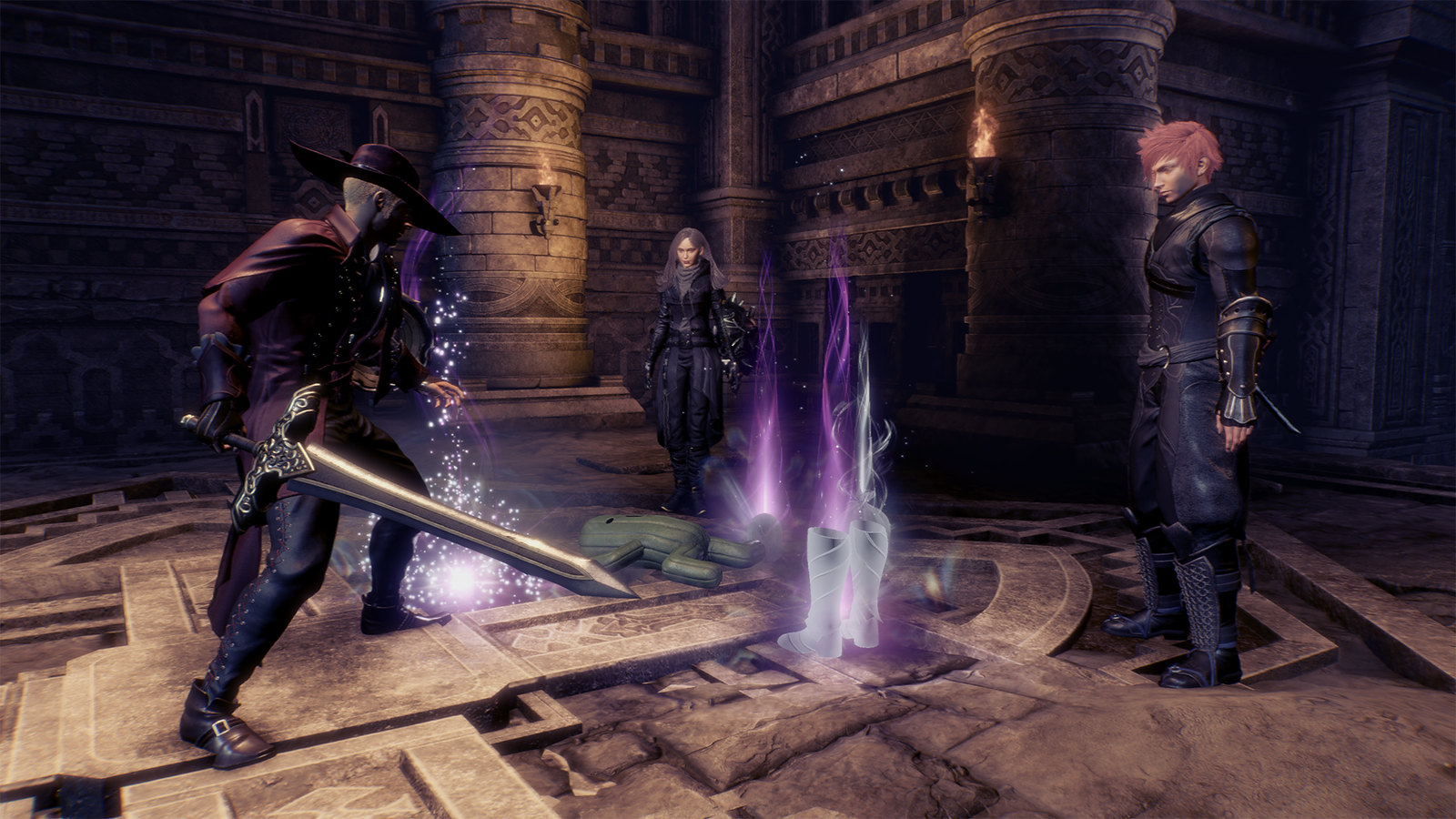 Kumabe-san: We approached balancing both single and multiplayer together in parallel to ensure that both gameplay experiences would be fun for players. Even during solo gameplay, players have their NPC companions, so we aimed for a balance that gives a sense of the fun that awaits in multiplayer. At the same time, we aimed for a balance that ensures that the difficulty isn’t mitigated too much in multiplayer, so we made quite a few adjustments while having various staff try out the game. 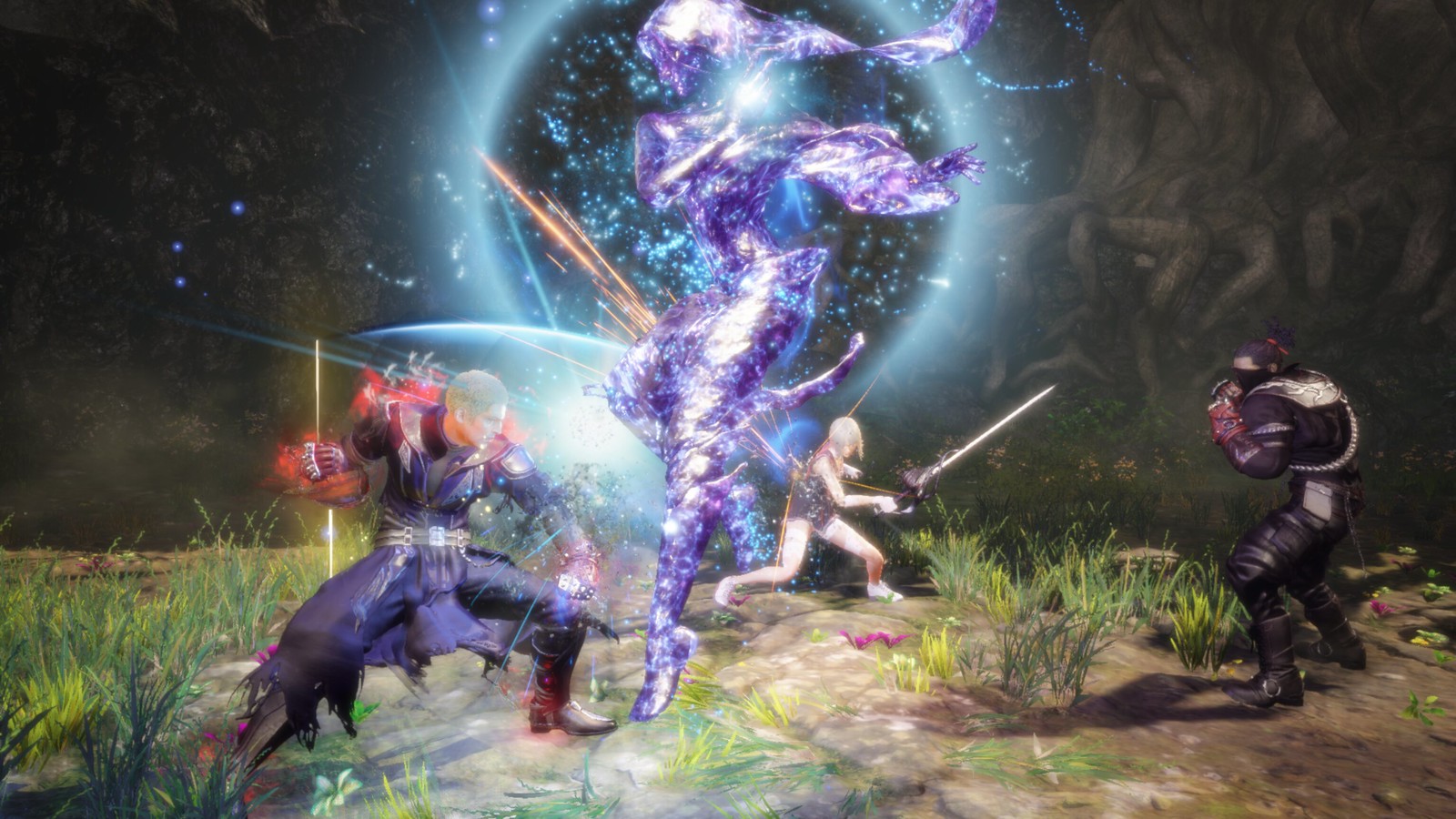 Developing multiplayer and the team’s inspirations

Inoue-san: From the very start of development, we knew we wanted to include multiplayer in the game. I had experience working on past games that also incorporated multiplayer, so from the get-go I was motivated to create something that would be enjoyable to play with friends. Early on, though, we did consider the idea of a four-player co-op since we see a party of four in the original Final Fantasy, and it’s fun to romp about in multiplayer, but we found that the space could also get too chaotic when there are too many players. We also considered a two-player co-op at one point, but felt that players would sense a high risk towards participation since the responsibility of failing a mission will unilaterally fall on the guest when participating, so ultimately, we decided three players would be best.

Kumabe-san: The team drew inspiration from various sources for SOPFFO’s multiplayer, including Nioh, where the high difficulty in single player can be mitigated through multiplayer. Personally speaking, I was a core player of Final Fantasy XI, so that was a big reference for me, in terms of the synergy between companions and jobs to tackle formidable foes. The team is really pleased with the system we’ve created where players can progress with friends in multiplayer through trial and error, without fear of the party disbanding, even in the case of a wipe. 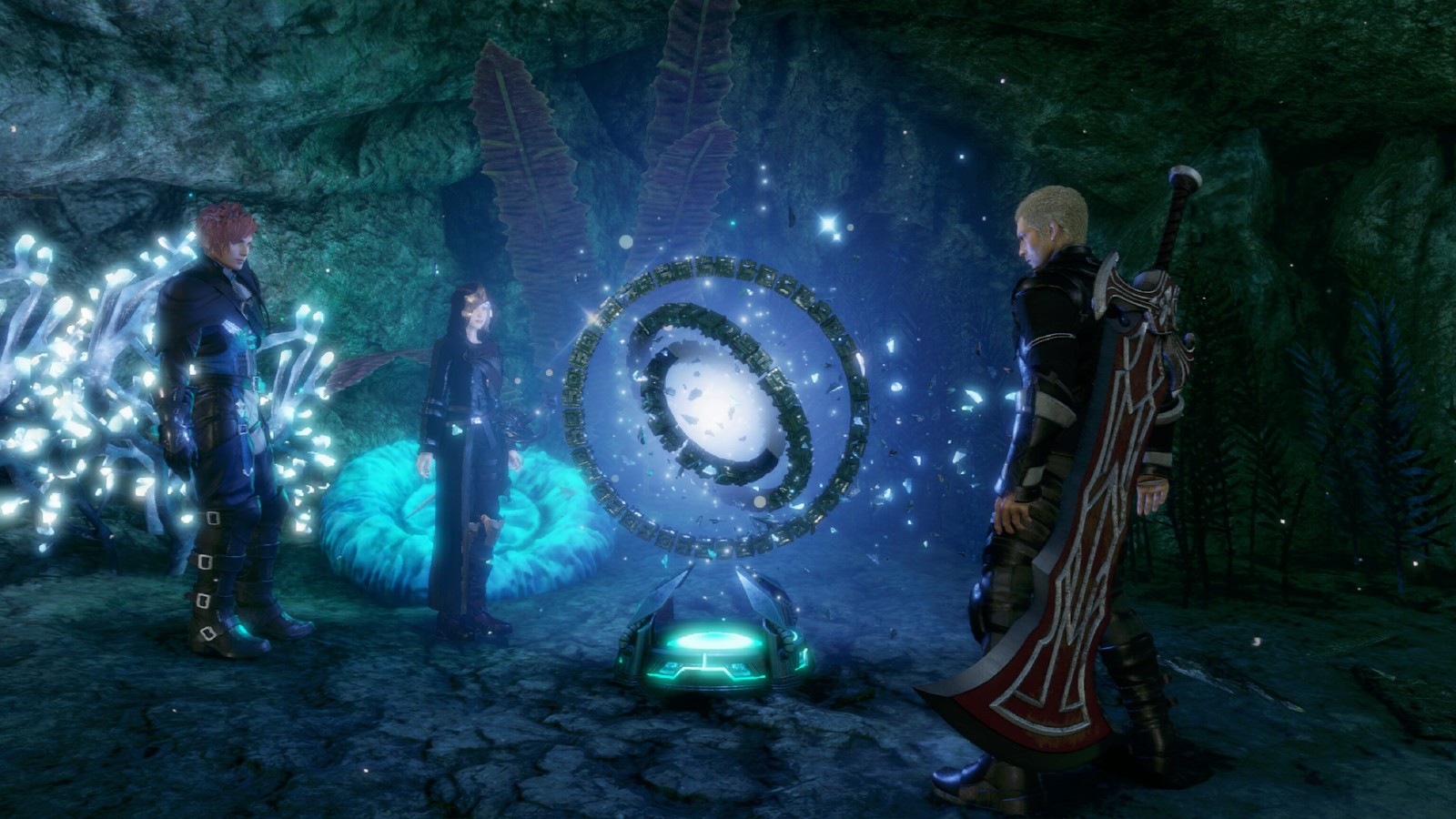 Inoue-san: As we alluded to above, optimizing the multiplayer in SOPFFO was not an easy thing to do. Possibly the most challenging aspect to nailing our multiplayer experience was having our job system. In single player, the companions basically have one job, and those controls can be imagined to some extent by the developer. In multiplayer, however, each player has two jobs, so potentially we could have six jobs total in a single space, which could make it rather difficult for players to keep up with.

Despite the difficulty (or chaos) having six jobs in one space would create, we felt it was important to create room for players to enjoy the game and show off various jobs in their own way. We also wanted to give players the freedom to fully consider their job compositions and team synergy, and not be limited in their job selection. Team NINJA took great care in adjusting the system to ensure that all of this was possible in the final product.

Kumabe-san: As the game isn’t balanced like an MMORPG, where certain content may be drastically more difficult unless you take on the challenge with a particular job, there really isn’t an ideal composition players need to abide by each time they team up with friends.

Inoue-san: That said… players may find it beneficial to use jobs that excel at long range attacks and support abilities, if they’re having a rough go. Support-type jobs like White Mage and Red Mage would be good for players who don’t feel very confident with action games, and they’ll get to provide support to their party members and hang back from the action. As you gradually get used to the action, it may also be good to start thinking more about the job composition, such as switching one to a job that excels in melee combat so you can lay down an attack at an opportune moment. 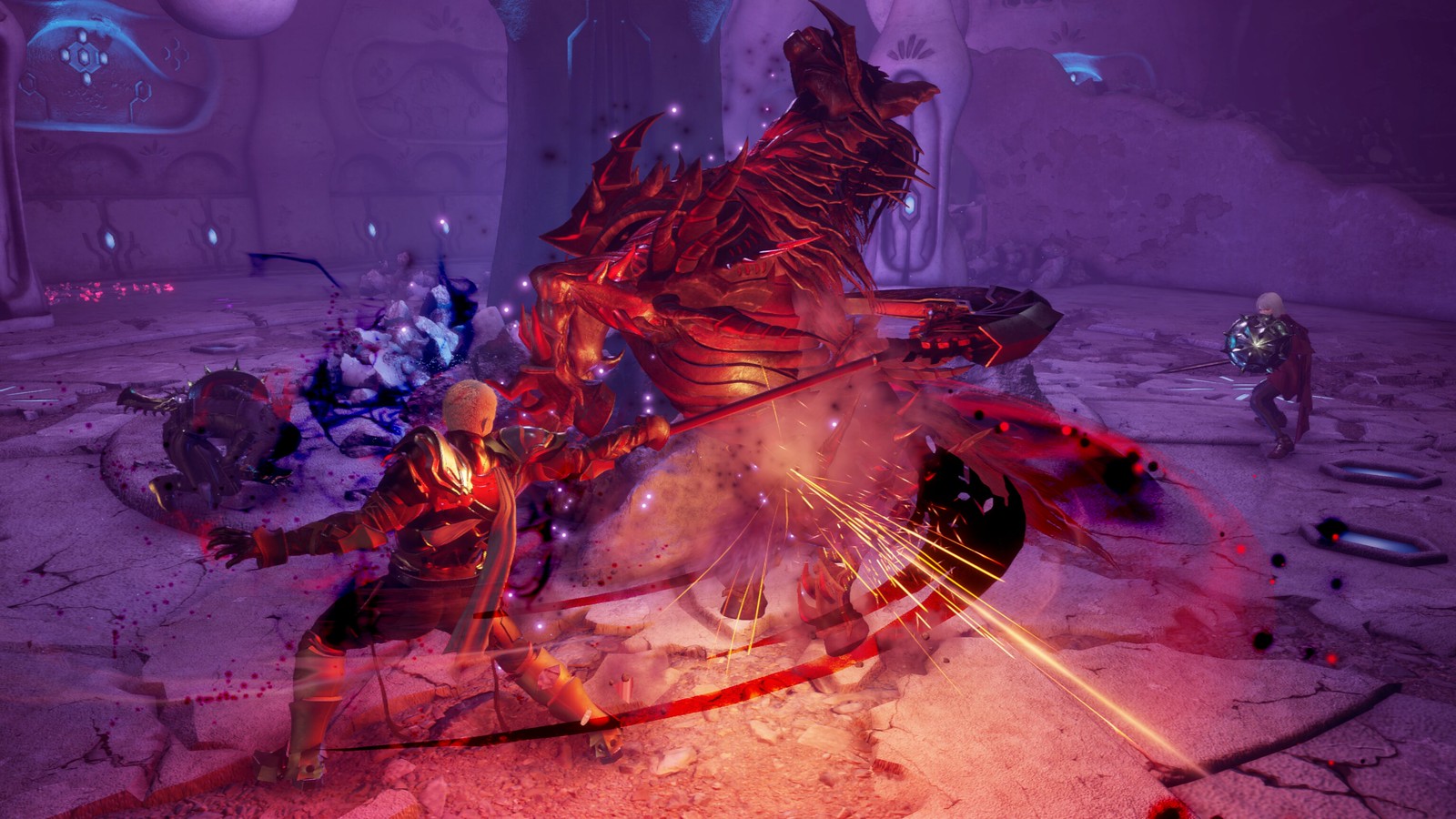 Kumabe-san: As for any personal recommendations to try out, I always took on a tank role in Final Fantasy XI, so I like to draw the enemy’s fire as a Knight or Void Knight while masterfully using Runic. That frees up my companions to use whichever jobs they personally enjoy.

Inoue-san: I find pairing the Knight (which makes it easier to build a party for aggressive hand-to-hand combat) with the Dark Knight (whose true strength is revealed when the player is running out of steam) to be really enjoyable. Perhaps a party that has Knight control enemy aggro up front, and then when their energy is running low, they have a Berserker go on the offensive could also be fun.

Kumabe-san: Party composition aside, we’d like to stress that the best approach is probably just diving in without thinking too much. If it seems like the enemies are getting a bit stronger, or if you have a job you’d like to advance or gear you’d like to collect, that might be the perfect time to give multiplayer a shot.

So, now that we’ve talked a bit more about multiplayer in SOPFFO… why not go try it out for yourself? Players of the demo will be matched with other players of the demo, so even after the game launches on March 18, demo players will be able to team up with others who are at a similar level and with similar experience with the game. You can download the demo right now by going here.

As a reminder, Stranger of Paradise Final Fantasy Origin launches on March 18. By pre-ordering either the Digital Standard or Digital Deluxe editions, you’ll be entitled to various goodies, including early access to the game on March 15. We can’t wait for everyone to fully experience the game in just a few days’ time – and maybe we’ll even see you in game!