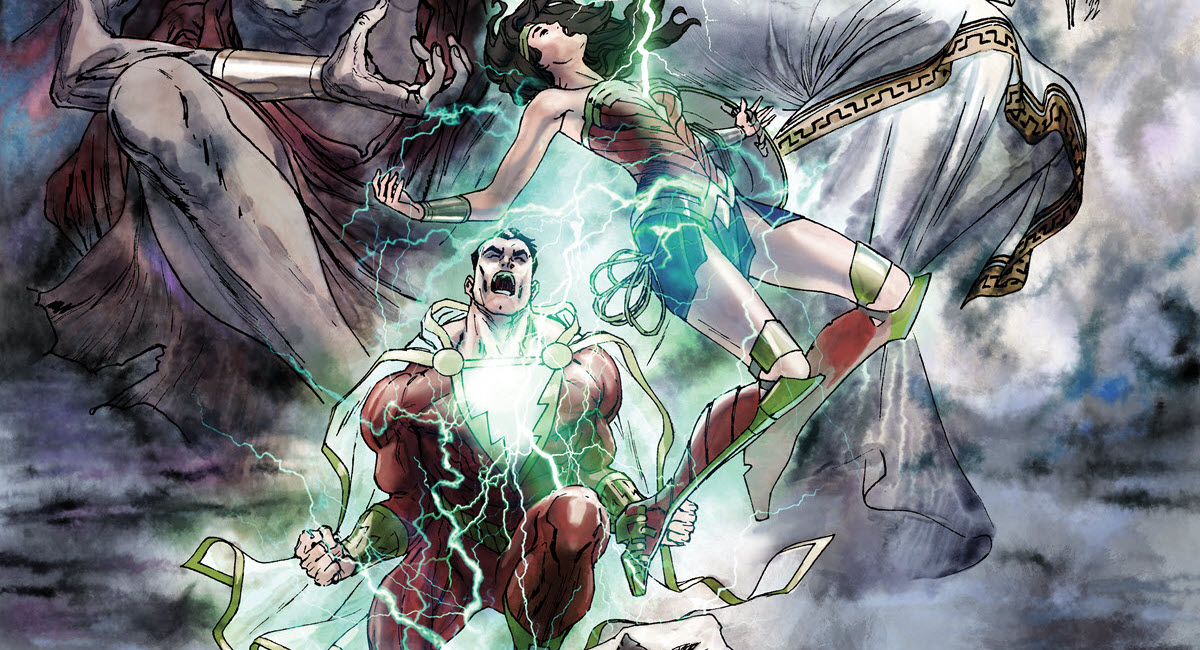 The upcoming Lazarus Planet event spinning out of the pages of Batman vs. Robin has already been solicited as wrapping up in February, but that doesn’t necessarily mean the story is over. Today DC announced Lazarus Planet: Revenge of the Gods, a four-issue miniseries launching out of the storyline. With a main story by G. Willow Wilson and illustrated by Cian Tormey  and Emanuela Lupacchino, and back-up stories written by Michael W. Conrad & Becky Cloonan and illustrated by Alitha Martinez, the series will ship bi-monthly beginning in March, and will also tie in to the March and April-shipping issues of Wonder Woman.

Here’s how DC describes Lazarus Planet: Revenge of the Gods:

The gods of the Multiverse have decided to take down the heroes they once called champions and the world they’ve sworn to protect. For years the gods sat idle atop their mountains as their legends faded into obscurity along with their bodies. Now is their time to remind the selfish mortals of their existence and take back the world with something more powerful than belief…fear. Only the brave heroes Wonder Woman and Shazam stand in their way, but will their combined powers be enough?

And here’s a description for the two tie-in issues of Wonder Woman, #797 and 798, which will feature main stories by ongoing writers Conrad & Cloonan and art by Amancay Nahuelpan, as well as back-up stories starring Mary Marvel from The New Champion of Shazam writer Josie Campbell and artist Caitlin Yarsky:

Wonder Woman #797 and #798 will also tie-in to Lazarus Planet: Revenge of the Gods while also setting up Diana Prince’s story in Dawn of DC in 2023. After Diana’s shocking choice to align herself with the gods, her world has changed. Could godhood be the answer to all her problems? Find out as Diana ascends! Wonder Woman #797 and #798 will feature Mary Marvel backup stories by The New Champion of Shazam Writer Josie Campbell and art by Caitlin Yarsky (Black Hammer).

Wonder Woman and Shazam being at the center of this storyline is a natural fit, given the two characters’ connections to the gods in terms of either their heritage or the source of their powers. “Revenge of the Gods” is also pretty close to “Fury of the Gods,” so maybe they’re looking to pull off a backdoor movie tie-in.

In the statement announcing the series, Wilson and Tormey expressed their excitement at bringing the story to life:

“I’m excited for readers to see what we’ve been cooking up–old favorite characters, new favorite characters, and team-ups you’ve never seen before are all coming your way,” said writer G. Willow Wilson. “Diana will be tested in ways she’s never been tested before, and find new allies in unexpected places. There are some twists and reveals that I guarantee will have you jumping out of your chair.”

“I am incredibly excited to get to work with G. Willow Wilson. I have been a fan of her work for years now and I couldn’t have chosen a more exciting book to work together on than Lazarus Planet: Revenge of the Gods,” said Artist Cian Tormey. “The story is going to feature things that I’ve never even thought about drawing before, so I hope everyone is ready for what we have planned!”

Check out all the assorted variant covers for the first month of the series, as well as an updated checklist for the overall Lazarus Planet event, below. Lazarus Planet: Revenge of the Gods #1 (of 4) arrives in stores and digitally on Tuesday, March 14th, with issue 2 out on March 28th. Wonder Woman #797 goes on sale on March 21st.

A Million Little Things: Things We Must See Before It’s Over!
MLB The Show 23 Running Switch Technical Test Later This Month (North America)
Take The Journey Of A Lifetime In Deliver Us Mars, Out Today On Xbox Series X|S and Xbox One
Capcom has treated us to 12 minutes of Resident Evil 4 Remake gameplay
Researchers discover way of layering graphene to mimic brain synapses