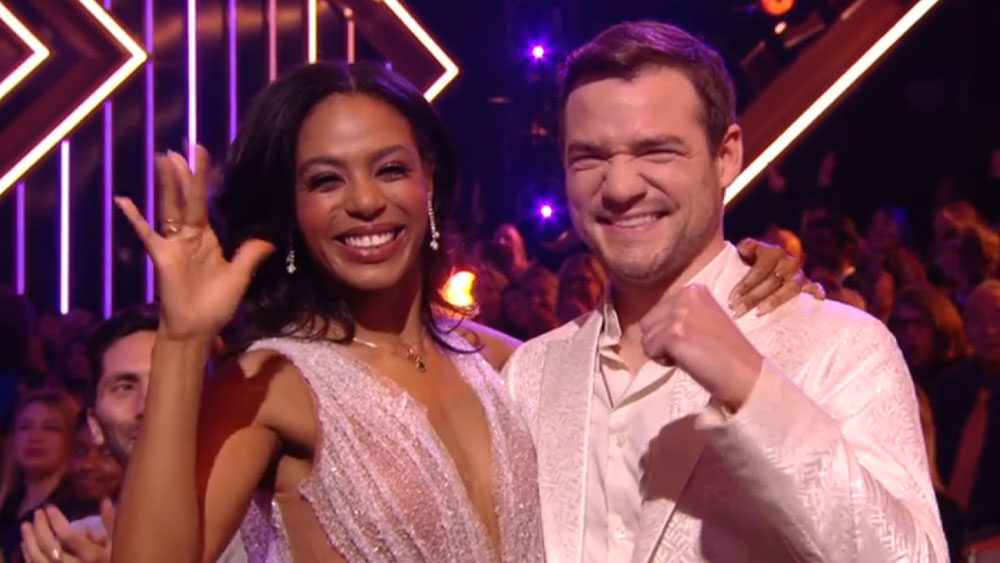 It’s semi-finals night on Dancing With The Stars! We have to wonder how many people have been watching along with us during the 31st season. Disney+ has yet to release any viewership numbers for the former ABC show, which isn’t an encouraging sign. And that’s too bad: DWTS under Executive Producer Conrad Green has once again found its glory, from inspirational participants like Selma Blair and Daniel Durant, to the refreshing way it has put the spotlight back on ballroom dancing.

Case in point: throughout the season, the judges have given us “master classes” on how to perform a perfect genre of ballroom dance. Monday, for example, featured Pasha Pashkov and Daniella Karagach executing a flawless Viennese waltz while Derek Hough and Len Goodman provided insightful commentary. So that’s why we love this show so much! Thanks for the much-needed reminder, Mr. Green.

Trevor Donovan and Emma Slater. Slater doesn’t like her chances in the semi-finals; the last three times she’s performed cha cha with her celebrity partner, she’s been eliminated. Tonight may not be any different: the judges weren’t entirely sold on his shirtless performance. (Will he dance in only briefs if he makes it to the finals?) “It’s unbelievable to see how much you have improved,” said Hough. “It’s always so much fun to watch you and you always make me insecure about my body.” Score: 32 out of 40

Daniel Durant and Britt Stewart. The CODA actor feels like he’s in the cool club after last week’s great scores. What’s better than the cool club, the divine dancer’s guild? Because Durant’s Viennese waltz should qualify him for immediate membership. “You really are Prince Charming,” said Bruno Tonioli. “Everyone here has fallen in love with you. What you bring to the dance floor is absolutely fantastic. You were sailing across the dance floor.” Score: 35 out of 40

Shangela and Gleb Savchenko. No one seems to be having more fun in this competition than Shangela, who’s never once broken down during rehearsals or complained about her partner (who, to be fair, seems like one helluva fella). Tonight, Shangela was giddier than ever, dancing the Paso doble to Lady Gaga’s “The Edge of Glory.” “It is so easy to love you because everything you do,” said Carrie Ann Inaba. “You do not dance fear. You are never afraid to fail and I love that so much. It makes your performance so exciting.” Score: 36 out of 40

Wayne Brady and Witney Carson. Okay this is awkward; the Let’s Make a Deal admitted during rehearsal that he once looked fondly at another woman during his marriage. He didn’t act on it but he had some splainin’ to do with his wife. To make a short story even shorter: they eventually got divorced. Oof. Anyway, that was his inspiration for his Paso doble. Sure? “Great first dance,” said Hough. “We have to be very particular. Your shoulders kind of rolled forward a bit. It felt a little too angular to me. It’s semi finals. But overall, it was still a strong dance.” Oh, and Carson announced she is expecting baby number 2! Score: 36 out of 40

Gabby Windey and Val Chmerkovskiy. The Bachelorette talked about her recent breakup with Erich Schwer and how she wants to channel her parents’ relationship — not her failed showmance — into her Viennese waltz. It worked! “You really looked like you stepped out of a dream,” said Tonioli. “We have seen a Viennese waltz earlier on that was stunning. This was equally beautiful in a different way. The way you used the changes of pace …. beautiful my darling!” Perfect Score

Charli D’Amelio and Mark Ballas. The frontrunner’s body is finally breaking down. Well, maybe it’s just happening to her feet. Actually, we’re talking about one toe: she has an ingrown nail! But it certainly didn’t get in the way of her Viennese waltz with her very much alive pro partner. It even made Inaba cry! “That was perfection on top of perfection, just so open and so powerful!” she said. “Mark, I know I’ve been pushing you guys but you brought it to this dance floor tonight. That was beyond spectacular.” Perfect Score

Goodman began the second hour of DWTS by announcing some sad news: this season will be his last! The head judge wants to spend some time with the grandkids, but he sure will miss the fancy hoofers. “I cannot thank you enough, the DWTS family,” said Goodman, who has been a part of the show since the beginning in 2005. “It has been such a wonderful experience for me. I’m looking forward to next week’s finale. I’m sure it’s going to be absolutely brilliant.”

Trevor Donovan and Emma Slater. The actor is pretty freakin’ pooped; he kept forgetting the steps during rehearsal and he’s feeling the weight of being this season’s underdog. But the judges were happy to throw him a bone after his graceful Viennese waltz. “What I liked, there was a nice amount in hold,” said Goodman. “A little bit skippy at times, and it could have had a more flowing motion. Dancing has not come easy to you. But I enjoyed watching your progression throughout the season. Well done.” Score: 33 out of 40

Daniel Durant and Britt Stewart. Seriously, how did he do that? The actor’s samba was not only on the beat, but … as Inaba said, “had swagger.” “Oh my gosh, samba is the hardest dance on this show,” said Hough. “That has so much content in it. So fantastic, there was a moment when I was in awe of the technique.” Score: 34 out of 40

Wayne Brady and Witney Carson. Brady chose “It’s a Man’s World” to perform the Viennese waltz because it made him think of the important women in his life! It also got him all verklempt when talking to Alfonso Ribeiro. “Well this is a man’s world, I wish someone would tell my wife,” said Goodman. “As always, a polished performance. As always you really give it everything you’ve got.” Score: 37 out of 40

Shangela and Gleb Savchenko. The drag queen got an adorable close-up before performing a silky (and acrobatic!) Viennese waltz to Whitney Houston’s “I Have Nothing.” “I love when you show your fragility,” said Tonioli. “Elegant, sophisticated. You are class, and it shows.” Score: 37 out of 40

Charli D’Amelio and Mark Ballas. The frontrunner doesn’t understand how the Paso doble works. If Ballas is the matador, then isn’t she the bull? No! She’s the cape and Goodman is the bull, Ballas says! Awww, that ain’t nice on the night he’s quit! Goodman probably wouldn’t mind. Onto another stellar performance by the social media star. “Perfection is different on everybody,” said Inaba, who began her critique with a hug for both D’Amlio and Ballas. “I do believe your perfection is another level, madam. It’s unbelievable.” Perfect Score

Gabby Windey and Val Chmerkovskiy. The pro thinks his partner is super fun, but he’s a tad worried about her ability to appear full of fight during the Paso doble. No more goofy Gabby, he insists! Windey left the hijinks backstage, but it sure would be nice if her face showed a little more emotion. The judges were nevertheless impressed. “That was a dramatic buildup to the full ending,” said Tonioli. “I was like a pressure cooker about to explode. Another great job, Val. That was genius!” Perfect Score

Donovan and Slater were sent home immediately because they had the lowest amount of votes and lowest judges’ scores on Monday.

Durant/Stewart and Shangela/Savchenko were left in the final two. Tonioli, Inaba and Hough saved Shangela and Savchenko, so Durant is heading home. What a great run for the CODA actor!