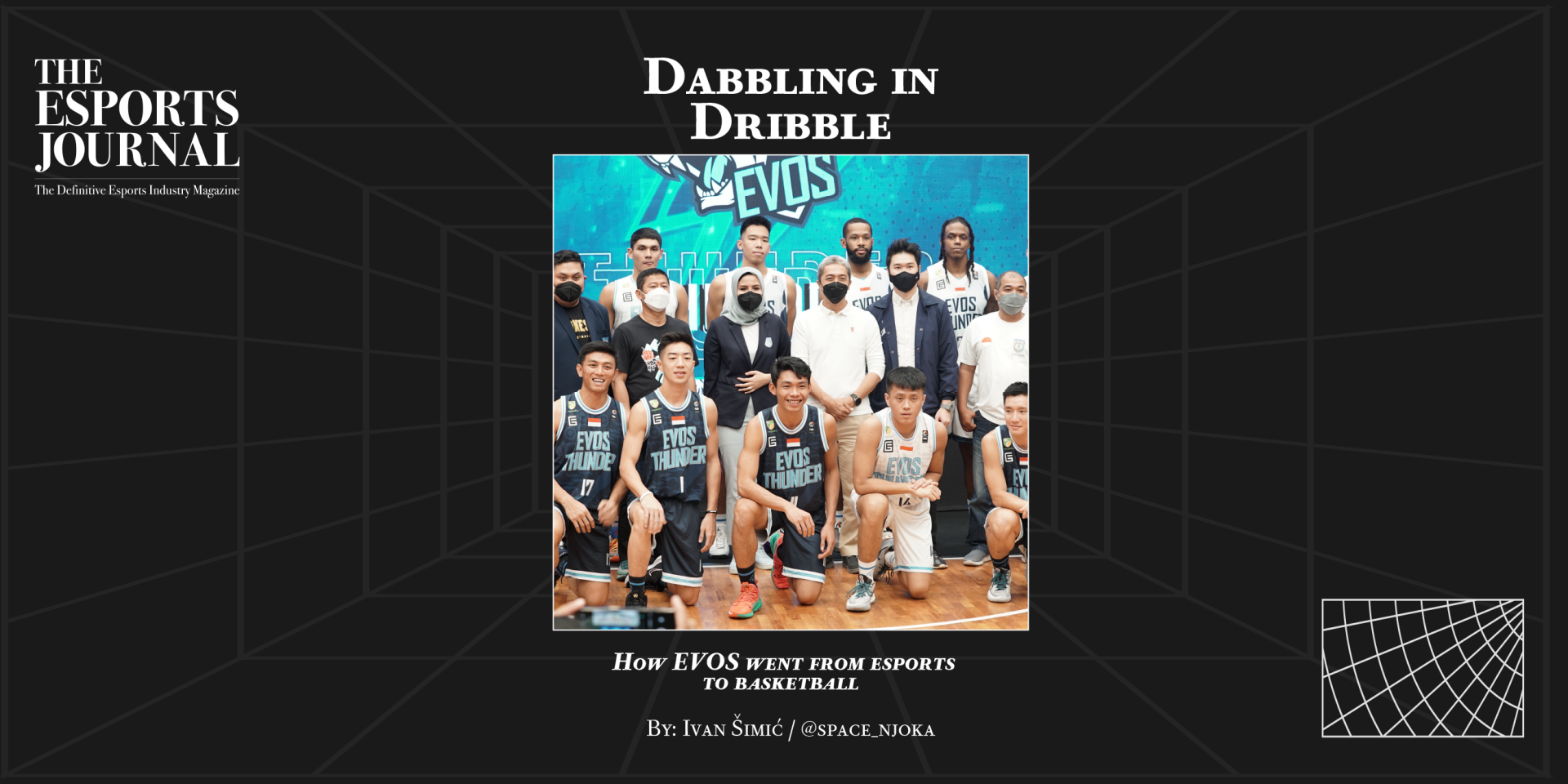 Chances are, you’ll know at least one major sports team that also — unbenounced to you —  fields an esports team. There’s enormous choice in the field; from NBA teams having their own esports franchises to football clubs such as Manchester City playing FIFA and Rocket League. Schalke 04 went even further and competed in  the non-sports- based League of Legends. That is, before they sold their franchise slot for €26.5m (~£22.8m) last year.

Sports teams have found a certain appeal to going digital, it seems. There’s a good business plan here — esports is growing and attracting large audiences, rosters and associated costs are smaller, and viewership for traditional sports is declining. Sports teams see esports as a way to reach more people — especially young people — which makes a lot of sense. But what about the other way around?

Founded in 2016, EVOS Esports is one of the most popular esports organisations in Southeast Asia. Boasting successes in a series of mobile esports titles and has a dedicated fanbase. EVOS currently fields teams in Arena of Valor, Free Fire, Mobile Legends: Bang Bang, PUBG Mobile, and League of Legends: Wild Rift. Like a spectacular no-look dish, it came as a shock when its founders announced an exploration of a very unusual new business venture: starting a basketball team.

Called EVOS Thunder, the new team competes in the first Indonesian Basketball League (IBL), a top-flight basketball league within the country. The new IBL season has just started, and at the time of writing, EVOS Thunder is 2-3.

Hartman Harris, Co-Founder of EVOS Esports, told The Esports Journal about EVOS’ interesting shift from computer to court and why the organisation decided to shoot its shot in basketball.

The goal was to try and start a team in a sport both Harris and Yuwadi enjoy and try to make the most out of it. “We’re pretty optimistic,” added Harris, stating that the final goal is to inspire younger generations to be bold and dream big.

EVOS Esports surely does dream big — the Indonesian team is likely the first esports organisation to start its own traditional sports team in a professional sports league.

Starting small, and focusing on the fundamentals

Of course, starting a brand new basketball team from nothing is no small feat. Although esports has its own challenges, it does not require physical training venues, regular travel for away games, or other physical logistical planning to the same extent. The first idea was to start small and focus on grassroots events to build a community. Harris said this approach is one of the main lessons his team learned from climbing the ranks in the esports space.

For a few years, the club’s focus will be on growth and community. Bogor, the city where EVOS Thunder is based in, is a well-known basketball city in Indonesia, so there should be no issues with finding fans to watch home games after the pandemic restrictions ease in the country, Harris hopes.

“From there, we’ll start to build a business,” he said. “Then, add better training and better facilities for our players so they can always try to give their best for EVOS fans and all of the basketball enthusiasts throughout Indonesia.”

There’s a number of similarities between esports and traditional sports. The number of young talents is impressive in both fields and the potential young players have is a ‘core strength’ for EVOS going forward.

EVOS Esports’ founders have years of experience in growing a brand in this part of the world. Still, EVOS Thunder is a completely different venture. Harris agreed that basketball isn’t the same as esports, but the team is still focusing on the same end product.

“We are focusing on what we want to build, as we have a lot of experience and practice in shaping our brand’s experiences to be meaningful for our target audience,” he said.

The ‘basketball scene’, as Harris put it, will surely guide EVOS to expanding the target audience and bring new products. The venture will also bring opportunities for brands that want to approach this market.

Of course, there’s also the question of its core esports fans. The organisation has a large fanbase in the region, but the majority of the fandom  is there for EVOS Esports. The challenge here is to approach those fans, or Evos Fams as the organisation calls them, with a completely different sport. Harris and his team are aware of this, but think that the inclusion of a new sport in the organisation’s portfolio can only bring good things to all supporters.

“We are convinced that the extraordinary support from EVOS Fams combined with the quality of our teams can fuel us to excel in various competitions,” he said. “Small steps that will be significant in the future are holding competitions, appealing events, and also involving and gathering our EVOS Fams through Discord.”

EVOS will try to approach its existing supporters with the benefits of basketball and make use of the fact that the company fields teams in esports and traditional sports as a positive side — those who don’t support esports can still support EVOS Thunder, and vice versa.

Basketball doesn’t need to be expensive

EVOS Thunder plays its home games in the Bucketlist, a basketball venue in Bogor, West Java. The venue provides everything needed for basketball fans, including cafes and even a museum. EVOS and Bucketlist are keen on working together to try and bring basketball to as many people as possible. Harris said that one of EVOS’s goals is to tackle the negative stigma that basketball is a very expensive sport.

Flipping the script to field a traditional sports roster as an esports org has a sparkling novelty to it, though the move is far more than a marketing ploy. If it ends up being a business success for the org, perhaps more organisations might entertain the idea of expanding their representation and fully blurring the line of what is and isn’t considered sport.

Maybe we’ll one day live in a world where Fnatic and G2 compete with the likes of Bayern and Ajax Amsterdam, both on the rift and on the pitch.

This article first appeared in The Esports Journal Edition 10 (page 38). Read the rest of Edition 10 for free using the embed below, or at theesportsjournal.news