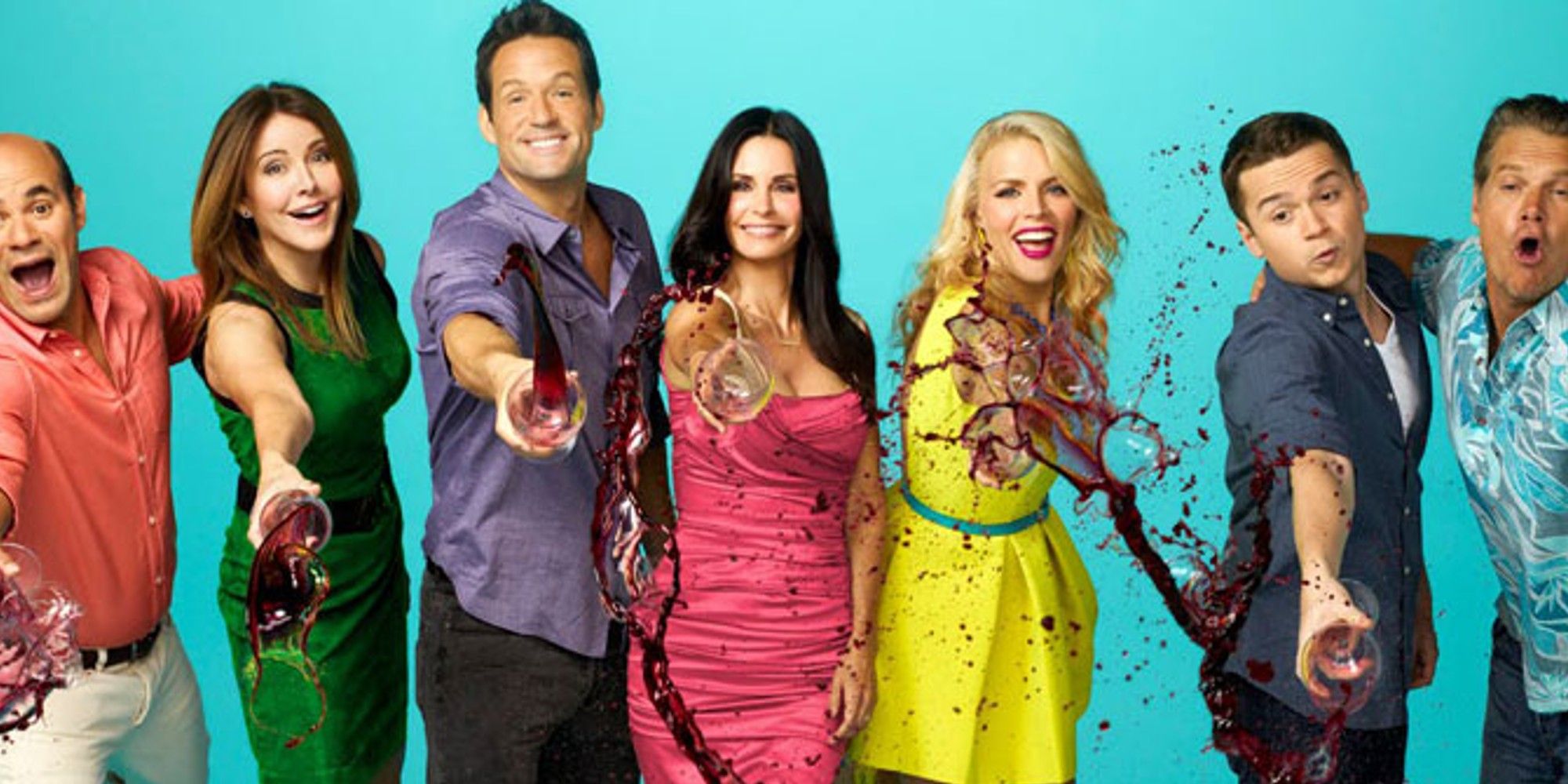 On a recent podcast guest appearance, Courteney Cox discussed the likelihood of the cast of Cougar Town reuniting for a future special program. Cox starred as Jules Cobb in the American sitcom series. Cougar Town ran for five seasons for 102 episodes across six seasons from 2009 to 2015.

In Cougar Town, Cox played recently divorced single mother Jules Cobb, who slowly re-enters the world of dating after spending a great deal of her adult life focused on her familial responsibilities. Initially having a preference for younger men, Jules developed over the series as she learned to love again alongside her friends. Starting out as an ABC production before being picked up by TBS for the final three seasons, Cougar Town saw Christa Miller, Busy Phillips, Dan Byrd, Josh Hopkins, Ian Gomez, Brian Van Holt, and Bob Clendenin star alongside Cox. While the star has returned to horror with shows like Shining Vale and reprising her role of Gale Weathers in 2022’s Scream, many have wondered if Cox was interested in returning to another of her sitcom roles, with the actress offering her answer in a recent interview.

Related: Friends: Every Time The Cast Acted Together After The Show Ended

Speaking to Mark Malkin for Variety‘s Just for Variety Podcast, the host asked Cox whether she had an interest in returning for a Cougar Town reunion program, to which Cox quickly stated that she was uninterested. Malkin then asked why she would be opposed to returning after similar projects like Scream and Friends‘ 2021 HBO Max reunion special, and Cox suggested she would be willing to return for a special where she’d discuss the show, but not a scripted episode. Cox elaborated by saying neither she nor the writers were ever interested in returning to the special, as they couldn’t simply do what had been done before. Check out Cox’s response below:

“I doubt it, no… Well, reunion as in, y’know, maybe just talking about it, But I knew that there would never be a reunion as in we’re gonna come back and played these characters again. It doesn’t work, I mean the writers never wanted to do that. We were in our 30’s, we can’t come back in our 50’s and expect to be trying to find ourselves.”

One of HBO Max’s most-watched programs upon release, the Friends: The Reunion special saw Cox reunite with co-stars Jennifer Aniston, David Schwimmer, Lisa Kudrow, Matt Leblanc, and Matthew Perry, coming together on the set of the acclaimed sitcom to look back on the series. In the special, the cast performed table reads and reenactments of select scenes and episodes, sharing behind-the-scenes stories while discussing with guest stars and celebrity fans, such as Lady Gaga, David Beckham, Kit Harrington, and many more. Meanwhile, Scream continued the story of Cox’s reporter-turned-writer Gale Weathers, who reunited with co-stars Neve Campbell and David Arquette when she is brought back to Woodsboro following a new Ghostface killer’s spree.

While Cox has reflected on series such as Friends in recent years, she hasn’t opened up about her time working on Cougar Town as much. Though, her point of wanting to avoid a continuation of Jules’ story is respectable, as projects such as those can fail under expectations and the pressure to recapture what made the original series successful. However, following the success of HBO Max’s Friends reunion, it would be interesting to hear Cox reflect on her Cougar Town experience, along with perhaps more sitcoms bringing their casts together to celebrate their legacy.

Nathan is a young writer whose interest in film started when watching behind-the-scenes features on DVDs as a kid. He graduated with a degree in Film Studies. He has an interest in stories, how they can affect people and inspire. Nathan also has a fondness for comics and games, doing his best to keep up to date.

Shenmue The Animation has been cancelled after its first season
‘Leopoldstadt’, ‘The Piano Lesson’ Lead Broadway Newcomers At Box Office; ‘Funny Girl’, ‘Phantom Of The Opera’ Major Draws
Valve’s Steam Deck, and official dock, can now be bought without a reservation
Trevor Noah’s ‘Daily Show’ Host Spot Could Be Filled by Roy Wood Jr
Collect ‘em all in L.O.L. Surprise! B.B.s BORN TO TRAVEL