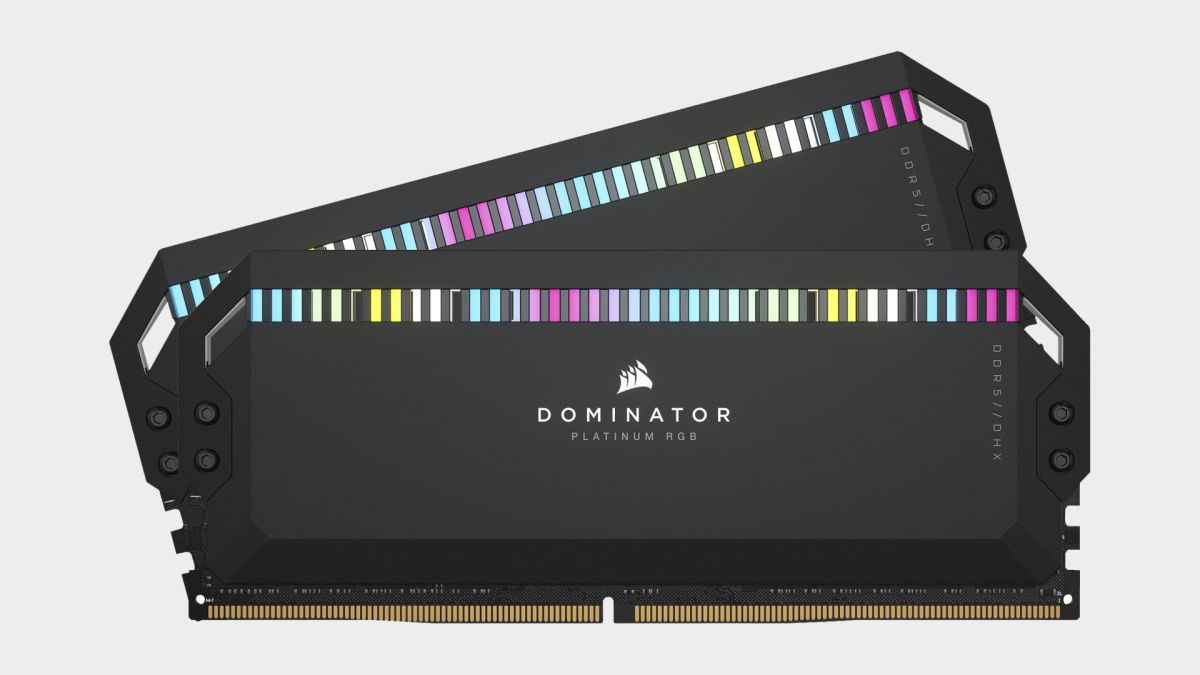 The latest in our series of DDR5 memory reviews is here. Unlike our reviews of the G.Skill Trident Z5 DDR5-6000 and Teamgroup Delta DDR5-6400 kits, the Corsair Dominator Platinum DDR5-5200 features a more earthly spec and a price that won’t make you faint at first glance. Though, like all DDR5, it costs a lot more than it reasonably should.

The problems with DDR5 supply have been well reported. DDR5 is a good example of how supply chain problems can decimate the availability of a product. Much like a car without a steering wheel is useless, DDR5 memory is useless without critical power management components. We’re told that the supply of PMICs is improving, but it could be some time before DDR5 becomes more affordable and even longer before it reaches DDR4 levels of affordability.

We aren’t going to harp on and on about that.  In the coming months, when prices are a lot lower, and we’re hopefully enjoying post pandemic life, these kits will look like absolute bargains compared to where they are now.

Corsair’s Dominator kits have always had premium good looks, and I think its DDR5 kits still look great. The black aluminium heat spreaders feel very solid and heavy. Even the fonts on the sides add a touch of class, even if you’ll never see them built inside your rig. If DDR5 needed any significant cooling, these heat spreaders would do a sterling job. It must be said that these modules are very tall, so you’ll need to make sure your cooler won’t be impeded.

The tops of the heatsinks feature something of a blocky Tetris-y RGB look. They can be controlled by Corsair’s popular and easy to use, if somewhat resource intensive, iCue software. If you’ve got other Corsair components lighting up your PC, then you’ll be right at home. A Corsair case, memory, cooler and keyboard/mouse combo can look great when its all synced up. Though I have to say, I am not personally a fan of RGB, but I will admit to a little bit of guilty pleasure having a play with a full set of synchonized RGB components.

The kit I’m testing here runs at 5200MHz with 38-38-38-84 timings at a voltage of 1.25v. That’s about what we’d consider to be a sweet spot kit based on speeds and timings, at least for first generation DDR5. In the future, faster speeds or lower timings will require a rethink of that statement, however. This kit comes equipped with Micron ICs which are currently the weakest of the three we’ve tested to date. Samsung and Hynix seem to be the favoured IC for faster kits, and Hynix more widely compatible of those, with Micron being well suited to more affordable mainstream kits.

It makes us wonder why Corsair opted to pair its flagship design with what is otherwise a middle of the range spec memory component.

The Corsair kit performs at a decent level across our benchmark suite regardless. The jump from the entry level 4800MHz kits to 5200MHz is just enough to make a difference in apps that thrive on higher bandwidth. Of course, it trails the faster kits as you would expect.

It’s also worth noting that it narrowly (if insignificantly) trails a DDR4-3600 kit at gaming because games tend to favour low latency over high bandwidth. It’s not really worth dwelling on, but in general, moving to 5600MHz and higher at lower than C40 is where DDR5 begins to pull ahead of DDR4. That’s something worth weighing up when you’re deciding whether to make the jump to DDR5 in the first place.

Don’t forget that once you put the load onto the GPU, the memory makes very little difference. You can see this in the Metro Enhanced Edition test, which includes ray tracing. Even at 1080p, the whole field is cover by four fps. It will be less than that at higher resolutions.

Overclocking on the Corsair kit, however, was a little on the disappointing side. But thats not unexpected with current Micron based kits struggling to hit high speeds consistently. At 5600MHz my test rig was bootable, but not stable at 1.34v.  Moving to a higher voltage over the default 1.25v doesn’t deliver a lot. It’s possible that there’s more in it as motherboard BIOS mature, much like we’ve seen with Samsung based memory in the short time since the release of DDR5.

Fans of Corsair products and the iCue RGB system won’t need to be convinced to buy this kit. It looks fantastic and, though it won’t set speed records, this is the kind of kit that should have many years of life ahead of it. You’ll want to go with something faster if you must have every last drop of performance for a high-end rig, but for mainstream DDR5 buyers, Corsair won’t let you down.

For me it’s (mostly) worth the extra money over a 4800MHz kit, but you’ll need to measure its value against what other brands and speeds are available at the time you buy… the market is just so volatile right now. Notably Corsair DDR5 certainly carries a premium that can significantly vary from market to market. If you go don’t mind paying a bit extra over a bland kit, the Corsair Dominator Platinum RGB kit will do the job, but it demands to be shown off in a windowed case.