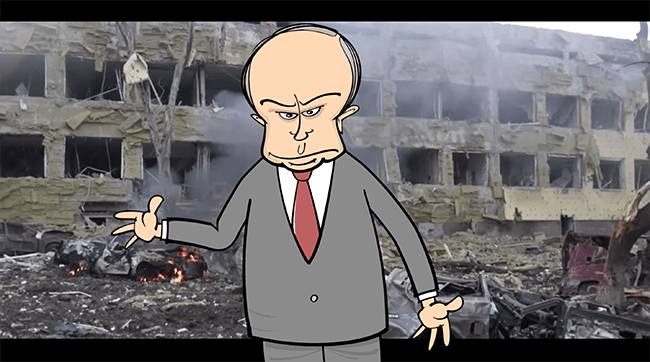 Vladimir Putin is living in a dreamland and wants all of us to live in it, too. (Okay, it’s more of a nightmare-land.) Putin has clamped down on any semblance of free press in Russia and is desperately trying to blame any war, or “special military operation,” on Ukraine and the West.

But don’t worry, the Special Military Operation is going just swimmingly according to Putin. It is definitely not a disastrous military invasion that is turning into a blood bath for Ukrainian people and Russian soldiers alike. Incredibly, many people in Russia — hooked on state t.v. — just can’t wrap their minds around the fact that their country attacked Ukraine and is bombing civilians right next door.

Speaking of state Russian state t.v., Tucker Carlson is continuing to rant about conspiracies and go far beyond simply giving Russia the benefit of the doubt. He is such a hit in the Kremlin, Russian leadership is pushing state media to air Carlson clips as much as possible. The Carlson Doctrine is: if Joe Biden says it’s bad, it must be good.

Ana de Armas’ ‘Blonde’ Slammed as Anti-Abortion Propaganda
Johnny Depp’s Lawyers Got Some Of The Best Seats In The House At Recent Concert After Defamation Wins
Slime Rancher 2 Early Access Review
Kevin Hart Gets Real About Will Smith’s Oscars Slap And How The World Should Treat His Situation With Chris Rock
Quantum Leap Season 1 Episode 3 Review: Somebody Up There Likes Ben