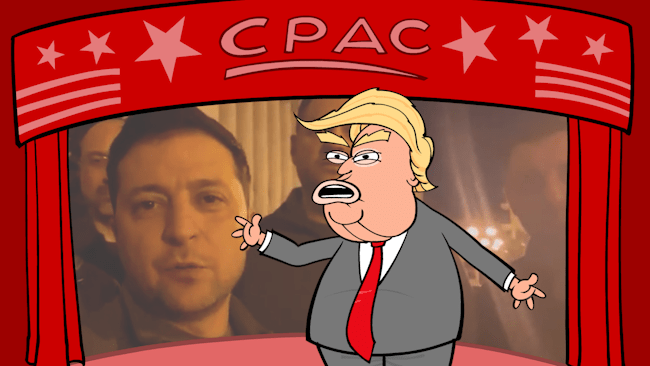 Oh, how I wish Donald Trump didn’t matter any more and we could just write him off as a disgraced ex-president who is rapidly getting crazier. He is those things, of course, except he does matter. He matters because he still has such strong support in the Republican Party and may very well regain control of the White House in a couple years.

Yes, the deranged man who rants on stage at CPAC and literally refers to the United States as a “stupid country” while expressing admiration (and simultaneously, condemnation) for a dictator who is bombing civilians in Ukraine . . . will very likely be the Republican nominee for president. It’s not just Trump who has gone mad, it’s one of the two main political parties in the United States that has gone off the deep end.

Sure, not all Republicans fawn over Putin like Trump does — and many support sanctions and are outraged at Russia’s invasion of Ukraine — but ask them if they disagree with Trump and you’ll likely hear crickets. Remember, this isn’t just about Trump spouting nonsense and speaking off the cuff, he (and his cronies) have actively undermined U.S. alliances, NATO and Ukraine while he was president.

If you’re Donald Trump or one of his Republican followers, saying you support Ukraine or Volodymyr Zelensky now doesn’t make up for years of destabilizing statements and actions.