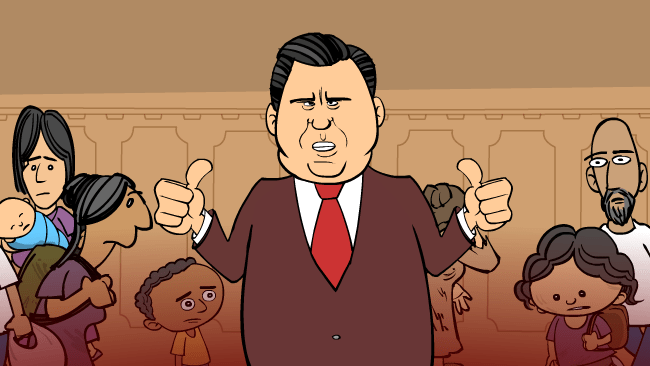 If you’ve been enjoying my cartoons, join me on Patreon, where you can get prints, exclusive videos and other goodies — all while you help support my work!

Florida Governor Ron DeSantis has achieved a new low by using people seeking asylum as a political prop. Of course he didn’t invent the idea (xenophobic hat tip to Donald Trump!), before DeSantis sent a planeload of people from Venezuela to Martha’s Vineyard, Texas Governor Greg Abbott and Arizona Governor Doug Ducey have been sending migrants to Democratic strongholds like Chicago and Washington, D.C.

This cruelty is taking place to, you know, “own the libs” and make those lefties realize what life is like for MAGA states along the southern border. The fact that migrants are fleeing violence and persecution in their home countries to seek asylum in the United States apparently does not exempt them from being used in elaborate, multi-state publicity stunts.

While Republicans have been very public about what they are doing with thousands of migrants, President Biden has been a little quieter about the million-plus migrants his administration has turned away. (To Biden’s credit, he has managed to improve things for children traveling alone and migrant families, although the bar set by the previous administration was definitely not very high.)

Here’s hoping some Republican governors get prosecuted for human trafficking, even if the traffic was in the direction of places like Martha’s Vineyard and Washington, D.C.