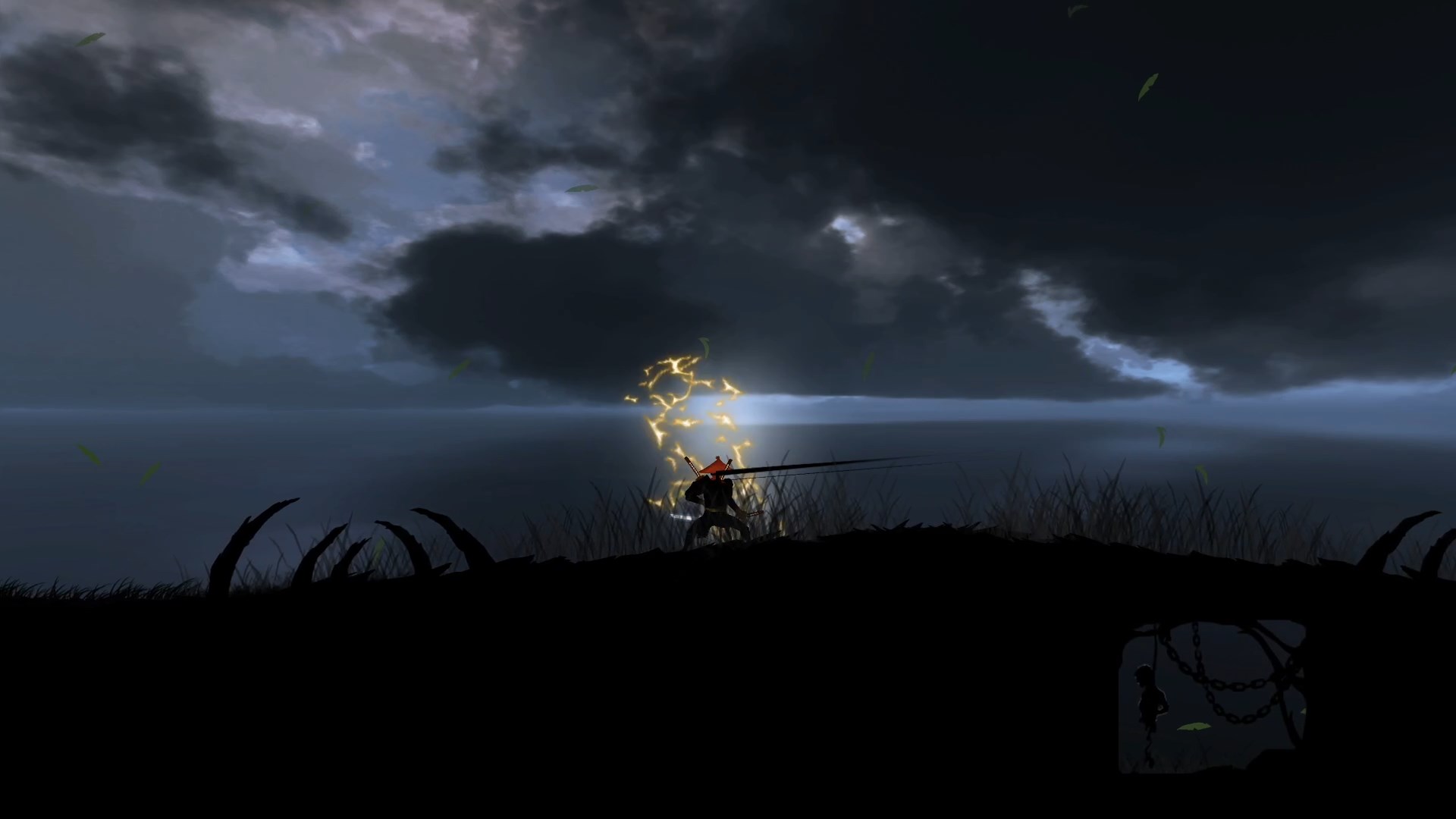 Luckily, Bloody Samurai justifies that additional cost, and offers reasons for playing it beyond the achievements. It’s a rough-around-the-edges little action-platformer, but it does just about enough to warrant spending a couple of quid.

There’s a story, told in comic panels. Many years ago, you imprisoned a demon that was carving chunks out of the Earth. But it’s escaped, having focused itself on vengeance in the intervening period. The demon killed your wife and captured your son, and now it’s waiting for you to attempt to recover him.

It’s a pulpy storyline that works, and does a good job of setting up some bloodletting. There are fifteen levels here, reasonably long 2D affairs all silhouetted as if they were ripped out of Limbo or Kill Bill. Your bloodied samurai needs to navigate the levels to reach a temple at their end, so he can get closer to the demon and his son.

The samurai has quite a few weapons at his disposal. Oddly, a melee attack isn’t one of them: though you are carrying a katana around with you, you can’t really use it. We’re still befuddled why that might be the case. Instead, the primary weapon is a shuriken, which makes the levels more Megaman-like than you might have first expected. Ninety percent of the enemies you dispatch will leave a corpse behind punctured with throwing stars.

There’s also a rush attack which does, indeed, use the katana, but is on such a massive cooldown that we barely ever used it. We often forgot that we had the damn thing, simply because the delay was interminable, so we could never rely on it.  And there’s a Metal Gear Solid-like ‘hide in box’ move that makes you momentarily invisible, mostly so that you can attack an enemy’s back rather than their front.

Each of these can get upgraded to a significant degree through a skill tree. Cash and gems can be found in levels, often in secret rooms denoted by a dagger sticking out of a wall, and they get spent on improvements to the rush, shurikens, hidey box and your health. It’s more than we might have expected for the price, and it adds a much-needed sense of improvement and power as you progress.

But what impresses most is the range of hazards that Bloody Samurai tosses your way. Enemies are reasonably limited at first: nothing more than a sword one, a spear one and a shooty one. But enemies with shields appear, acting like the riot-shield-wielding enemies in a game of Army of Two. Enemies lean out of windows to fire at you. There may not be a stupendous cast of enemies here, but there’s enough.

Hazards, too, do a decent job of maintaining variety. Bear traps, spike traps and lava fonts all need to be spotted and avoided. Bloody Samurai keeps finding new ways of making them interesting, as you fire shuriken to move boulders, which in turn cover the lava fonts; moving platforms act as momentary refuge from traps.

There are large swathes of Bloody Samurai where we were having a whale of a time, and began bemoaning the lack of achievements. There are very few reasons why this shouldn’t be treated like a proper retail release. It’s pretty darn good, and it would have gained a bigger audience with some Gamerscore.

But it still has those rough edges we mentioned earlier. Being monochromatic, enemies and hazards can be unclear. We died plenty of times thanks to a trap we simply didn’t spot, and we’re not convinced the fault lies solely with us. It’s most egregious when decorative silhouettes are placed in the environment – a foreground glass blade, a background farmer – which confuse or even hide something that affects gameplay. And some hazards are unfairly hard to spot. A hatch that hides a rifleman is particularly rude.

Bloody Samurai also knows all of our buttons when it comes to bad user interface design. Menus are inconsistent in their controls: sometimes it wants you to use the d-pad, other times the analogue stick. It’s hard to tell what’s being highlighted at a given time. And there’s so much leftover information and controls from the PC port. Did we really need to see the keyboard controls on a console game?

Most of all, by about the eighth or ninth level, the fatigue sets in. Bloody Samurai has ideas, but only so much to fill eight levels. We came across sequences of enemies and hazards that we felt that we had seen before, and Bloody Samurai began to bely its budget roots. The final hour of Bloody Samurai was more of a slog than it needed to be.

We’re under no illusions: Bloody Samurai is far from a spectacular action-platformer. It could do with some clarity, a better UI and a dollop of variety. But for the price, Bloody Samurai has style to spare, and there’s at least an afternoon’s worth of entertainment in there. Just don’t expect any Xbox Gamerscore for your troubles.

You can buy Bloody Samurai from the Xbox Store