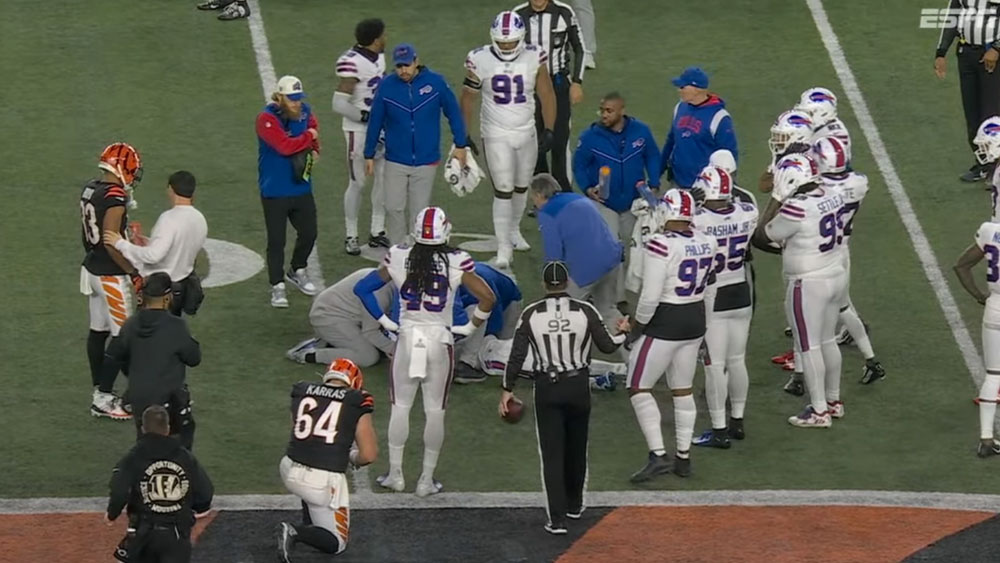 Monday Night Football came to a complete halt when Bills safety Damar Hamlin collapsed on the field after making a tackle against the Bengals.

The moment happened during the first quarter with less than 6 minutes remaining. Hamlin tackled wide receiver Tee Higgins, he was able to stand up after but then collapsed.

First responders rushed to the field to aid the 24-year-old player and administered CPR for several minutes. He was taken to the hospital in an ambulance.

“It’s something like we’ve never seen happen before. I’ve never seen it, I’ve never been a part of it, never heard about it. … All you can do is pray for this gentleman right now. … That’s somebody’s son, somebody’s brother, somebody’s father — they want to know what’s going on,” ESPN studio analyst Booger McFarland said.

Adam Schefter added, “Chilling to watch it. And in the day and age we live in, you can just see on social media [that] every single team, every single player, every single person offering up their prayers for Damar Hamlin. … The game is so secondary to everything else. No one cares about the game right no, everybody cares about this young man, his family and finding out how he’s doing.”

Players from both teams were distraught by what had just transpired with their colleague and some were even seen crying.