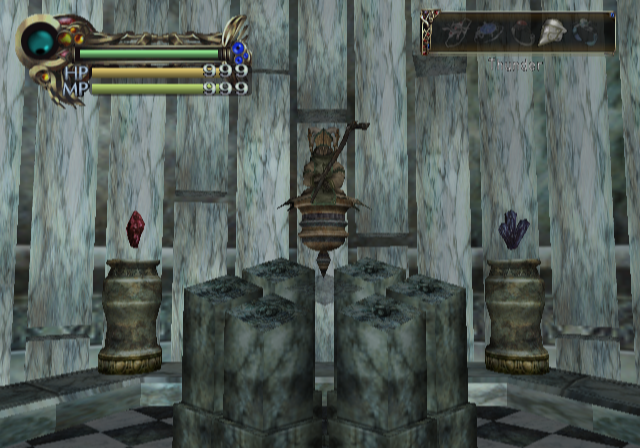 Anybody who claims to have any fond memories of playing a PS2 launch game other than TimeSplitters is a filthy liar. It was a miserable wave of sports and racing games, with a couple of absolutely honking action RPGs thrown in to keep people happy until Dark Cloud came out. Don’t talk to me about Fantavision.

Nobody was coming over to your house to play Fantavision.

Even among such dire competition, FromSoftware’s Eternal Ring stands out as the least memorable. Summoner looked vaguely like something Bioware could have made. Even Orphen: Scion of Sorcery at least had that rad anime guy on the front cover.

Poor Eternal Ring had precious little going for it when it first appeared. FromSoft’s other first-person RPG offering – King’s Field – didn’t have the cultural cache it’s retroactively earned by its association with the Souls games.

There were no quivering hordes eagerly awaiting its arrival, no scores of tough guys just chomping at the bit to explain how it’s actually incredibly easy if you just get the Holy Bauble of the Fecal Matriarch and dump all your points into the Girth stat. Video games in 2000 mostly lived and died on the shelf, and Eternal Ring’s box was the sort of uninspired fantasy that would barely register in the brain even as you flicked past it in a Blockbuster’s bargain bin five years later.

There’s a temptation to view a developer’s past works as iterations on an idea that would eventually crystallise into something you love. It would be fair to assume that Eternal Ring could hold a germ that would day turn into Elden Ring. It’s about rings. It’s hard as all hell. It has a dragon. There’s an extended visit to a poisoned swamp in the opening hours. There are certainly aesthetic and thematic similarities, but ultimately: that FromSoft spark just isn’t here.

There’s nothing in the way of a character creator, no chance to form an unbreakable bond with a hideous creature of your own making. No opportunity to create a photorealistic Tom Jones just to see what he would look like dodging monsters in his underpants. Every player is trapped in the shoes of Cain Morgan, a blonde black hole of personality.

Cain feels like an unwanted Western interloper in a setting that is otherwise staunchly FromSoftware in tone, like he somehow got lost on his way to starring in some insipid platformer. Cain Morgan has been sent by the king to the Isle of No Return, a collection of uninspired caves and temples, to find the Eternal Ring, a mystical doodad of indeterminate power. It’s a bizarrely heroic and conventional set-up from a developer famous for casting you as Undead Nobodies.

And “conventional” is a way to describe most of Eternal Ring. Other than being slightly more difficult than the average PS2 action-RPG, there is precious little in the way of FromSoft’s usual design bravery in terms of esoteric systems and player antagonism. Every item plainly explains itself. There are no hidden mechanics, no unusual weapons or bizarre spells. This lack of vision extends to the rest of it, too.

The Bad Guy burns down the Opening RPG Village. Most of the enemies are variations on Goblin or Lizard. But it’s the environments that are the biggest disappointment here. Whether it was down to lack of familiarity with new hardware, time or money restraints, most of these caves and ruins barely manage to reach the detail and atmosphere of those found in the PS1’s King’s Field 3. And they truly pale in comparison to the dank and dreadful world of King’s Field 4 (which FromSoftware would release for the same console just over a year later).

No character creator means everyone is stuck playing the exact same way, and that way involves One Button for Sword and One Button for Magic. You’ll never find yourself stumbling on an obscure weapon with a mysterious description that changes how you approach combat. You’ll start the game with a sword in your left hand and an underwhelming array of magic missiles in your right. The only thing approaching a sense of freedom in terms of how to approach combat is in which particular order you craft the game’s eponymous Rings.

You’ll do all of this via one vendor, who introduced herself with an explicit tutorial and demands payment in an incredibly over-abundant resource. And there’s nothing unusual or unique to Eternal Ring’s magic, either; it’s all incredibly straight-forward, mostly just an array of fireballs of incrementally increasing size and power.

Did you know that Dark Souls was almost called Dark Ring, but FromSoft ultimately refused to let Scottish people have their fun? They just unapologetically released a game literally called Elden Ring – which is inarguably even funnier – Scottish slang be damned. It really goes to show the difference in the confidence they have in their vision the studio has developed over the years. The idea of today’s FromSoft releasing a game with as many Western concessions as Eternal Ring is unimaginable. A character as bland as Cain Morgan wouldn’t be allowed within fifteen miles of the thing.

It feels the closest thing there is to a FromSoftware B-team release; something quickly cobbled together by middle management to take advantage of a release window with little competition, while the real passion was being funnelled into King’s Field 4. Some of it feels dangerously close to *spits* market testing – a cynical attempt to gauge what was missing from the launch line-up and provide it. The tag on the back of the box is “who said Fantasies had to be Final?”. Eurgh.

In short, unless you’re a strict FromSoftware completionist, there’s very little of worth to be found in going this far back. You might stumble on some echoes of King’s Field, but you’ll mostly find yourself slowly strafing around another lizard while lobbing various elemental balls at it until it stops moving. All you’ll find is a PS2 launch title that isn’t TimeSplitters. And nobody deserves that.