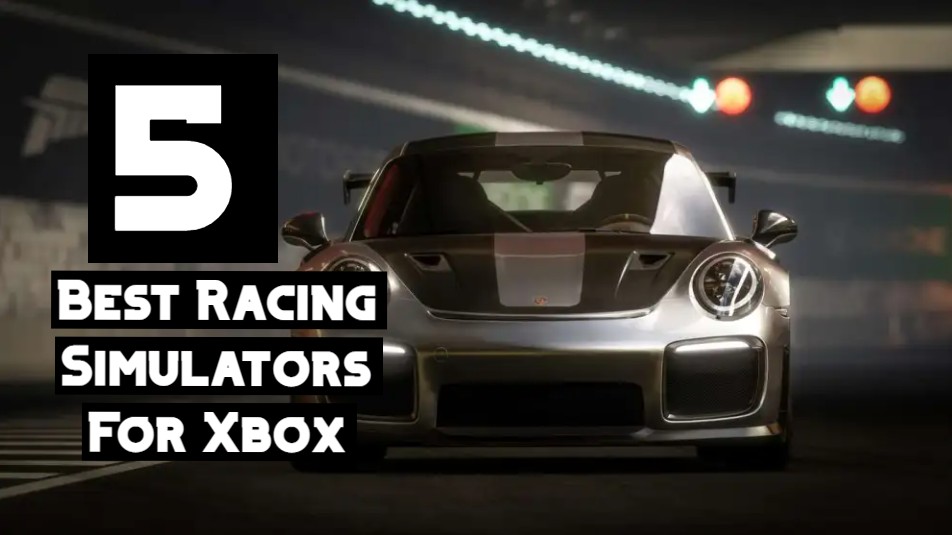 Following on from my musings/scribblings about the murky world of arcade racing games on the Xbox, it would seem that the time is finally ripe for me to cast the net a little wider, and consider the world of sim racers. Yes, the kind of racing games where you know that if you can just get the right amount of camber dialled on to the rear wheels, you’ll be able to blast round that hairpin at least 0.5 mph faster. It seems like a perfectly reasonable pursuit to sink time into, eh?

While all good racers these days support multiplayer races over the online worlds, I may be in a subset of the normal racing breed; I’d rather tweak my car, and then try and set a flying time to compare with my friends than actually go wheel-to-wheel, with them online. This may have something to do with the fact that playing with TheXboxHub crew in any racing game is a bit like being dropped into the middle of a dodgem ring, with many and varied dirty tactics being deployed. Being put into a wall on the last corner of the last lap? Standard practice for my colleagues. However, when it’s just you and the track, all excuses are removed, and you just need to be as quick and as clean as you can.

So, what I hope to do with this article is present the other side of the coin from that of the arcade racers, detailing 5 of the best racing simulator games on Xbox. So start your engines, and let’s proceed out into an orderly parade lap as we list, in no particular order, the best of the racing simulation games on the Xbox – at least those that I have played.

Now, one thing to mention, as I have compiled the list: most of the entries appear to be part of a series, so what I will try and do is select the best entry in each franchise. Note: for those of you who wonder where the plethora of F1 games are, I’ve gone this far in my gaming career without playing an F1 game, and I don’t intend to start now. I don’t like watching it on the telly, being much more a BTCC kind of guy, so there’s no place in what is, at heart, MY list!

But let’s rev up and roll out…

I have a long history with Forza Motorsport, and the first game I ever played on my very own Xbox 360 was Forza Motorsport 3. Since that time, I have played every Forza game ever, except the very first one, as way back then I was a PlayStation boy through and through, and as far as I knew, Gran Turismo was as good as a racing game got.

However, once I got hold of Forza Motorsport 3, my views were radically altered. Although I did actually weaken and buy a PS3 just to play GT5; I then sold it within a week as it was a huge disappointment. I didn’t like The Last of Us either, but I digress.

Now, to try and get back on track (see what I did there?), Forza Motorsport has gone from strength to strength as the numbers have risen. I’m going to have to be predictable, I’m afraid, and say that of the bunch, Forza Motorsport 7 is by far the best. Running on an Xbox and a 4K telly, it’s enough to move to raptures with how smoothly it runs. The addition of rain to the races, while long overdue, is handled so well that I sometimes get lost just watching the raindrops run up the camera view that I prefer, that of the front bumper. When you consider that FM7 has more cars than you can shake a camshaft at, there’s no shortage of content.

There are a seemingly endless succession of tracks to race on as well, from La Sarthe and its infamous straight which is about the only place to max some of the cars, right down to little old Silverstone with its twisty bends. It’s the sheer amount of customisation that makes this game as good as it is, with each part upgradable, and once upgraded, able to be tweaked. Left rear tyre pressure? Drop it a smidge for better traction off the line, check!

Add to this a very powerful vinyl editor, where you can pretty much make whatever you want and stick it to a car, and the options are pretty much endless. I used to get a kick out of replicating cars from the Japanese D1 drift series in Forza, and while it can take an hour to make just one sticker, it’s something that I find very calming, when I’m stressed from the racing.

Just as an aside, Forza Motorsport 7 is free with Game Pass, so if you haven’t played, you should!

Project CARS is again a franchise that I’ve played from the very early days.

The first game was a bit of a mess when it launched, if I’m honest, with issues using a controller to try and wrestle the fire breathing beasties around a track. Once these difficulties were patched out, which to Slightly Mad Studios’ credit happened fairly quickly, the game got a lot better.

What I liked about the layout of these games is the way that they mimicked that of a regular race weekend. By this, I mean that you had practice sessions, qualifying sessions and then finally the race itself, so by the time the race came around you had no excuse for not knowing the track.

Project CARS 2 – the second game in the series – is one that I just could not get on with, weirdly. Despite the fact that people were giving it good review scores, it just didn’t “feel” right to me, and as a result I hardly played it.

My choice for the best in the series then, is the third game, the cleverly titled Project CARS 3, which despite dumbing down the simulation aspects quite a lot, was ironically the most fun to play. Don’t get me wrong, it hadn’t turned into Need for Speed overnight, but a little less emphasis on making the cars hard to drive, and a little more emphasis on actually making a game that was fun to play went a long way to helping me make it the best of the series.

Of course, if you want the full on Project CARS experience, just turn off all the assists and the game will still quite happily fire you backwards off the track, upside down and on fire!

Assetto Corsa was a real learning curve for me – at least the first game was. One of the things I learned was that if using an Elite Controller, if you had the trigger locks on, as I had since I’d been playing a shooting game, it actually stops you revving your engine to its full extent. I did wonder why I was losing so badly in the first race, and once I turned the locks off, I was able to drive at full speed! Top tip there, ladies and gentlemen, all part of the service.

Now though there is another Assetto Corsa, that of Competizione, and the two games in the series are quite different, so it’s a bit tricky to choose a winner.

The first game had you driving regular cars on your way up the tree, I vividly remember my first car was a Fiat 500, as an example. This followed the standard kind of Forza Motorsport game layout – start with a rubbish car in the lower depths of the racing league, before winning money, buying better cars, entering more difficult races and so on and so forth.

Assetto Corsa Competizione has taken a different tack, and instead puts you in the Nomex romper suit of a trainee professional racer. You were required to learn how to handle the cars in a series of tests and then into a season of races, and boy oh boy was it tough. Running off track could get you a time penalty, if you didn’t take a pit stop when the game said you should, you were straight up disqualified, and so on.

Because of this difficulty, because of this insistence on absolute racing discipline, I’m going to give Competizione the nod over the original game. When you won a race here, you knew you had worked for it.

This is a bit out of left field, as CarX Drift Racer Online isn’t strictly a drift simulation game, but to be honest, of all the drift games I’ve played (and that’s pretty much every one that was every released, even the the top-down delights of Absolute Drift) it’s the most like real life.

While there isn’t much in the way of simulation like settings, although there are a few, it was more the driving style that ticked my sim boxes. Throwing a car into a corner sideways is always going to be a high risk manoeuvre, and balancing the steering, countersteering and throttle is handled very well in the game. Add into this a roster of cars that is pretty much straight out the Initial D anime, and the rest of the game was always going to be an easy sell to me.

The customisation of the cars is a strong point, with some outlandish body kits available if you can afford them; in particular the ones that made the car look like a battered drift weapon, with missing front bumpers and so on. Add to this a selection of stickers and vinyls, that while they weren’t going to give Forza any sleepless nights, still managed to make your car unique, and the package was complete.

I mean, who doesn’t want to drift a neon pink AE86 around a track?

Ah, THE rally game. It had to be in this list, one of the many, and the best at the moment is without doubt still Dirt Rally 2.0. See, I’ve been a bit underwhelmed with the WRC series – WRC 9, WRC 10 and WRC Generations in particular – as the handling of the cars seemed to imply that the tyres were made of teflon or a similar low friction material. It was all a little wayward as well, as sometimes the car would wildly oversteer, and sometimes, for no reason I could fathom, it would understeer off the edge of a cliff.

None of these “features” has ever been an issue in Dirt Rally 2.0; the handling was razor sharp, and while the difficulty was certainly there (try having a front end crash on a night stage, then completing it with no lights if you don’t believe me!) the cars and the handling model gave you confidence. The handbrake was like an actual handbrake too, rather than a switch to turn the car through 90 degrees, and even the snow stages could be tackled with a reasonable expectation of success.

The tracks were a highlight, except the Scottish ones where people thought the apex of a long sweeper was the perfect place to place a massive pile of logs!

Buying new cars, and then racing in different championships was a lot of fun, and the difference between a weedy little Mini and a fire breathing, 500 BHP, rear wheel drive weapon like the Sierra RS500 was stark, requiring you to modulate all the inputs as any attempt to take liberties would result in a little light crashing.

All in all, with the huge amount of DLC that was released for the game, Dirt Rally 2.0 should still be seen as the best rally game around today.

So, that brings us to the end and the list of the very finest racing games on Xbox – at least in simulation form. The question is, have I missed any out? What sim racers are on your must play list? Let us know in the comments!