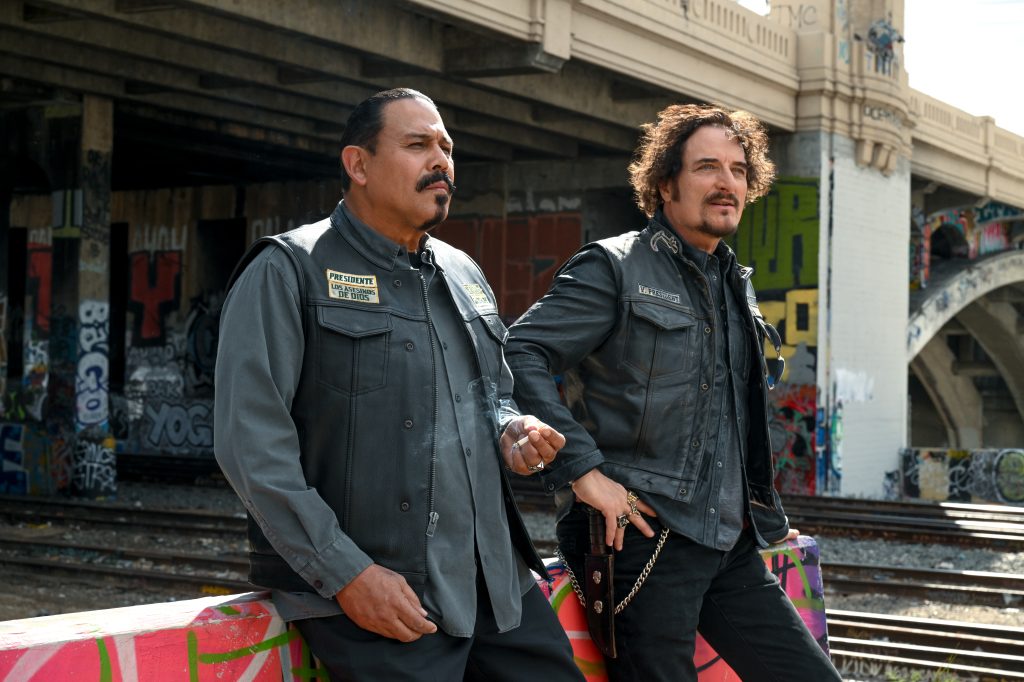 If there was any question left as to Coco’s (Richard Cabral) fate on FX’s Mayans M.C., the Season 4 finale confirms the beloved character’s death as he is finally laid to rest. His life, like that of others running in similar circles, was cut short due to an act of violence that could’ve easily been avoided. 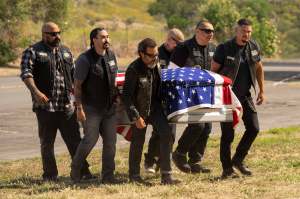 But there’s no point lamenting how things could’ve been. Instead, Johnny “El Coco” Cruz was given a hero’s farewell worthy of a Marine who sacrificed for his country. In a particularly emotional scene, Coco’s best friend and brother-in-arms Gilly (Vincent “Rocco” Vargas) presented Coco’s daughter with the American flag that draped his casket.

It’s worth noting Vargas is a real-life combat veteran who served his country proudly as part of the Army.

The finale also serves as a big return for Kim Coates as Tig in an epic Sons of Anarchy crossover. Although the charming—pun intended—Venus Van Dam (Walton Goggins) was nowhere in sight, seeing Tig in Santo Padre sure was a treat.

Tig was peeved over the return of “the demon we all thought was dead out in the desert.” The demon of which he speaks is Isaac (JR Bourne), leader of Meth Mountain that revealed a hidden Sons of Anarchy reaper tattoo on his body at the end of last season.

Isaac, as it turns out, is the younger brother of Les Packer (Robert Patrick), President of SAMCRO’s San Bernadino chapter. Les was last mentioned in Season 3 as undergoing treatment for cancer but it was confirmed tonight he is still alive and kicking.

Co-creator Elgin James really leaned into bringing the past into the present when he set up a tête-à-tête between Tig and Marcus Alvarez (Emilio Rivera) to discuss club business. Alvarez may have taken the reigns back from his cousin Bishop (Michael Irby) at the start of the season, but he’s still in the dark about a lot of things including Montez’s (Jacob Vargas) death which is what sparked the SAMDINO retaliation against the Mayans. 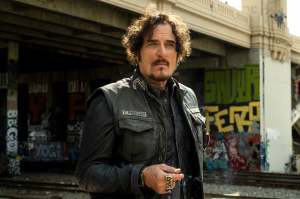 Tig and Alvarez open up about getting older and how they’ve changed since last they were on the battlefield together and about past regrets. At the top of that list is the loss of Alvarez’s son Esai (played by Kevin Alejandro in Sons of Anarchy), and his desire to avenge his death. Esai was stabbed in the head by SAMCRO’s Happy Lowman (David Labrava), the same killer who took out EZ’s (JD Pardo) mom Marisol on the order of Dita Galindo (Ada Maris). The banter was as beautiful as it was sad to witness.

“You know, what we do, it can get ugly but it’s what we do,” Tig tells Alvarez. “People sign up for fodder I say, feed ’em to the f***ing cannon. Our day is going to come soon enough, you and me.”

Shout out to everyone who stuck with me on this trip down memory lane but I digress.

EZ begins to unravel into new territory and won’t listen to reason. Padrino tries to barter peace between the Mayans and SAMCRO but EZ won’t hear of it. He orchestrates the ouster of Alvarez from the M.C. and declares himself the de facto president with a shocked Bishop riding shotgun as his second. With the club on board, Season 5—if the series is renewed— will see the Mayans go to war.

More tidbits from the episode will be addressed in our Q&A with Elgin James below.

DEADLINE: Is it our imagination or is EZ in way over his head?

ELGIN JAMES: Yeah, we always knew we wanted to go there. In Season 4, we definitely stepped on the gas a little bit. While creating these characters, Kurt [Sutter] and I talked about how EZ had this path out and was going to go to Stanford but that was never going to happen. The universe was going to spit him out back where he belongs—that was always going to be his fate. For three seasons he wasn’t sure if he was in or out but now he’s all in. He’s making the wrong decisions but he’s handling it in the same way he did with his dog when he was little where he did what no one else could. That’s what he’s doing now with the club where there are egos is in the way like with Bishop [Michael Irby], Angel [Clayton Cardenas]. And I don’t say ego in a negative way. 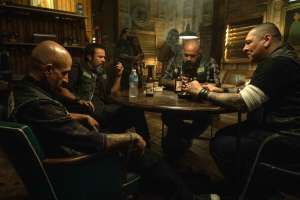 JAMES: Alvarez wants to do what’s right. He has this history that goes back 11 seasons of doing terrible things and now he wants to atone for that. That’s about him and not about the hungry machine that is the Mayans that want to eat and murder people. It thrives on that blood and mayhem. So EZ is in that templo being like, “I’m the only one that can control this monster.”

DEADLINE: How did Coco’s death push EZ further into darkness?

JAMES: Since Season 1, they had this connection—it was this cosmic connection. It’s sad that connection was lost in Season 3. I know it was gutting for people when we lost Coco but that’s intentional. There are a bunch of conspiracy theories, I’m sure when they saw Richard Cabral was in the writer’s room this season. But that’s what it feels like; we’ve all lost people that we love. So unless it’s your 95-year-old grandparents, it’s always gutting and surprising. And unfortunately, so often it happens when a person is getting their act together. It was important for us to feel that so we had it set up in a way for people to feel gutted even if it makes them say they’ll never watch the show again. We’re not done exploring the loss of Coco

DEADLINE: The topic of how EZ got out of jail popped back up this season. Did his deal not die with Kevin Jimenez (Maurice Compte)?

JAMES: You gotta wonder… It is something that came back up and that was one of the premises of the whole show. Even though it went away in Season 1, it never really went away. I think as a viewer, it takes some patience to watch a show where nothing happens in a vacuum. We mentioned Meth Mountain in Season 1 but we didn’t see it until Season 3. There are a lot of things like that tattoo that was on Isaac.

DEADLINE: A lot was revealed about Isaac and he’s scary.

JAMES: Isaac’s clubhouse was San Bernadino and he was sent away for doing terrible things. He’s a lost soul, that Isaac Packer. We talk about in the finale how family ties make you make bad decisions. That happened with [Les] Packer who tried to protect his little brother but he probably should’ve just shot him in the back. Instead, he went nomad and started his own—I don’t want to say cult—family. He would’ve still been out there if he hadn’t found out his brother’s sick. In a similar way to EZ, Isaac doesn’t trust anyone to take care of things in his brother’s absence. So he’s coming home to make things right. He’s back now for good and we’ll see that electricity. 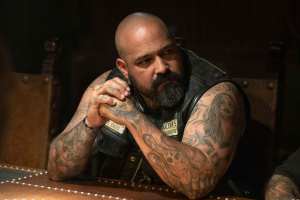 DEADLINE: Could we see the return of Les next season?

DEADLINE: Talk about the return of Kim Coates into this universe.

JAMES: That was incredible! It was something I wanted to happen since the pilot. It was me and Kurt and we had a list of people—most are dead—that we wanted to come back. Ray McKinnon was always No. 1 for me. And Kim was up there on the list too. It was Kurt who told me we should slow down because we needed to build our own thing first. So when we finally bring Kim in, we’ve earned it. It felt inevitable, like the war. I know it was tough for fans to wait those first two seasons because Kurt was building that bridge.

DEADLINE: What insight can you share into Tig and Alvarez’s conversation?

JAMES:  To bring back Tig, we had to make sure it was the right time and there was something for him and Alvarez to talk about. I always saw that scene with them; this meeting of two warriors, old and scarred, after 11 seasons. That conversation they had is one I’ve had with Emilio where we talk about being old and still wanting to set shit on fire. You talk about all the damage you’ve caused and not wanting to cause any more. That’s why Tig says, “It’s not about you becoming an old man, it’s about you becoming a good man.” Kim really put his heart and soul into that scene because he also understands it.

DEADLINE: Why didn’t you bring back Walton Goggins too?

JAMES: Dude, that would be the dream! We’ll see what happens. Let’s put that out into the universe. I have a little notebook where I have a list of everyone you want to come back like Jimmy Smits as Nero.

DEADLINE: Miguel finally discovers the truth about his parentage. How will this change him?

JAMES: Emotionally it goes beyond having the rug taken out from under you. It’s more like having the earth cracking open and you falling in. At this point, it doesn’t make any sense emotionally. How did they lie to him his entire life? But it also explains why he didn’t fit into his father’s shoes so well. And also why his father kept a distance from him no matter what he did, he could not get his father’s love. It’s also why his mother treated him a certain way. It’s something that breaks you and heals you at the same time. But also, like the Count of Monte Cristo, he was making a plan to get back on top. Part of that was the destruction of EZ Reyes. So now, everything gets more complicated for him because how do you now kill your brother?

DEADLINE: Does he kill his father?

JAMES: That’s something for Season 5. You’ll have to wait and see.

DEADLINE: In the finale, there’s this scene where SAMCRO shoots at EZ and his girlfriend as they’re riding a motorcycle on the highway. This semi-truck is in the way and becomes part of the accident. Is this a nod to Jax (Charlie Hunnam)?

JAMES: Maybe. We’re all the same DNA. What’s beautiful is that we have this audience that has never seen Sons of Anarchy and we also have fans of the show that watch us. What I think they don’t understand is that we are our own show but there are also these fingerprints [of Sons]. People call us the brown Sons of Anarchy and that’s not what we are. But it also doesn’t mean when we have Kim Coates on set that there isn’t a line of the cast and the crew waiting to get a selfie. Hopefully, we can have Kim back next season and maybe some others for these beautifully artistic and creative moments that are really like heavyweight bouts.

DEADLINE: With where things are left, what does the future have in store?

JAMES: We always start with a lot of storylines on the show from Season 1. So we’ve had to go further and further out. Season 4 went back to the peak of how far you can be on a storyline and still make sense. Things were always connected thematically so you have to pay attention. The whole point of this is for Season 5, we can start bringing everything back together. Did you see everybody is coming home? We went far out and now we’re gonna funnel in towards something. I’ll tell you, it’s going to be explosive.